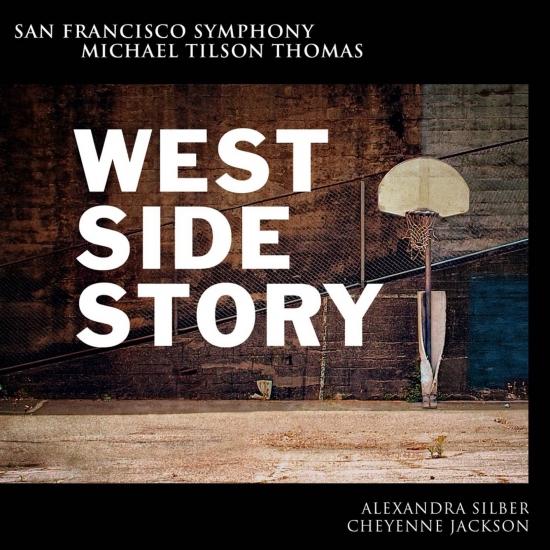 Michael Tilson Thomas and the Grammy Award-winning San Francisco Symphony present a new live recording of the first-ever concert performances of Leonard Bernstein’s complete score for the beloved musical West Side Story. The recording boasts a talented cast of Broadway actors led by Alexandra Silber (Maria) and Cheyenne Jackson (Tony) alongside members of the San Francisco Symphony Chorus. This Collector’s Edition 2-album Set includes a 100-page booklet featuring a new interview with MTT, notes from Rita Moreno and Jamie Bernstein, as well as a West Side Story historical timeline, archival photographs, complete lyrics, and rehearsal and performance photos. Presented in a 96kHz, 24bit - this must-have album is the latest treasure from the Orchestra’s very own SFS Media label.
The performances were recorded live at Davies Symphony Hall in late June and early July 2013 after Michael Tilson Thomas and the San Francisco Symphony became the first orchestra to receive permission from all four West Side Story rights-holders to perform and record the musical score in its entirety in a concert setting. Of the new recording, Michael Tilson Thomas said, “This is a new and rare opportunity to hear Bernstein’s complete score sung by a sensational young cast and a knock-your-socks-off orchestra. The San Francisco Symphony totally understands and feels this music. We show the Broadway roots of the piece and how its universal qualities translate into the way we think about it today.”
"It may prove to be the most significant recording of the show since the Original Broadway cast." (Huffington Post)
“As Maria, Silber accounts for several highlights on this recording. Her gleaming, peach-pure soprano lends sweetness and sexiness to the romantic duets...Tilson Thomas and the orchestra bring a wonderful clarity and pulsing sense of lushness to these songs and scenes...The percussion section covers itself in glory, punching up rhythms and deftly spicing things up throughout.” (MusicWeb International)
“So much of what Michael Tilson Thomas and his San Francisco Symphony Orchestra achieve here hits the spot; nowhere is casting wrong-headed...[Jackson] is idiomatic and engaged...Silber is lovely, too, with more vocal colour than the average show (soubrette) soprano...pretty damn good, and the first serious challenger to the...Broadway original.” (Gramophone Magazine)
“Listen as the fingers snap and the saxophone smoulders in the Act I prologue. You definitely feel the adrenaline of a live occasion: the vitality of the playing is enthralling. At the same time there’s a bloom and finesse about the sounds that lift us some distance from the show’s Broadway origins.” (The Times)
“Tilson Thomas's version scores heavily with its casting of the appealingly youthful-sounding Cheyenne Jackson as Tony and Alexandra Silber as Maria...The orchestra swings like the biggest of big bands, with a driving kit drummer and some spectacular trumpet playing...The performance deserves, and demands, tumultuous applause.” (BBC Music Magazine)
Cheyenne Jackson, vocals
Alexandra Silber, vocals
Jessica Vosk, vocals
Kevin Vortmann, tenor
Julia Bullock, soprano
Members of the San Francisco Symphony Chorus
San Francisco Symphony Orchestra
Michael Tilson Thomas, conductor
Recorded June 27 - July 2, 2013 at Davies Symphony Hall, San Francisco