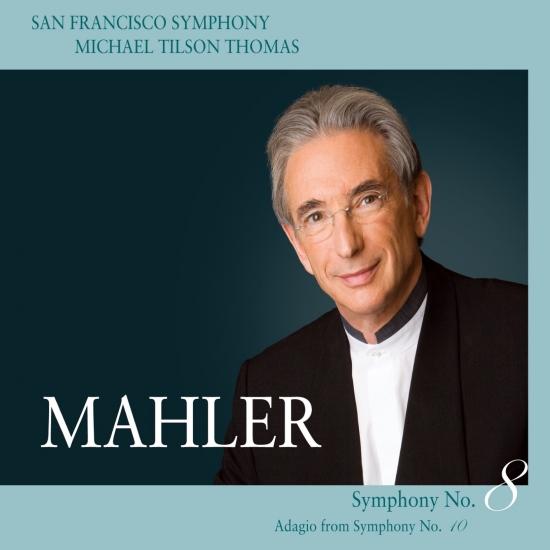 Info zu Mahler: Symphony No. 8, "Symphony of a Thousand" - Adagio from Symphpony No. 10

Michael Tilson Thomas and the San Francisco Symphony reach the culmination of their best-selling series of Mahler Symphonies with the Eighth, “Symphony of a Thousand”, coupled with the Adagio from Symphony No. 10.
Michael Tilson Thomas and the San Francisco Symphony reach the 11th instalment of their award-winning Mahler cycle with a live recording of the mighty Eighth Symphony, “Symphony of a Thousand”, coupled with the Adagio from Symphony No. 10. This release marks the culmination of their recordings of the complete Symphonies; future recordings rounding out the series will include Des Knaben Wunderhorn with baritone Thomas Hampson, Rückert Lieder with mezzo-soprano Susan Graham, and Songs of a Wayfarer. One of the most notable recording projects of our time, the series has been a world-wide commercial and artistic success, selling over 100,000 CDs. Every release has entered the top 10 of the Billboard Classical Chart, and the series has garnered four Grammy® Awards, a Gramophone Award, and numerous other international citations.
“In part II, however, Tilson Thomas manages to create a sense of rapt introspection and untroubled serenity far removed from the more tangible and portentous lyricism Solti tends to provide in quiet passages. …this is one of the most consistently satisfying and stimulating Mahler's Tenth, receives a lovingly harrowing performance; it demonstrates MTT's ability to characterise Mahler precisely and effectively without wallowing in undirected or unwarranted emotion.” (BBC Music Magazine)
“Tilson Thomas's reading is always warm and spontaneous-sounding but its real strength lies in the way phrases connect so that what can sometimes seem, on certain versions, merely a series of episodes...emerges very much 'of a piece'...Tilson Thomas [draws] more colour and variety (tonal and emotional) from the score than almost any of his rivals” (Gramophone Magazine)
“Very much on the plus side are the ­superlative orchestral playing, which is as consistently fine and well integrated as in any Mahler cycle currently ­available on disc, and the exceptional dynamic range and refinement of the ­recorded sound, which is demonstrated even more spectacularly than before” (The Guardian)
Erin Wall, soprano
Elza van den Heever, soprano
Laura Claycomb, soprano
Katarina Karnéus, mezzo
Yvonne Naef, mezzo
Anthony Dean Griffey, tenor
Quinn Kelsey, baritone
James Morris, bass-baritone
San Francisco Symphony Chorus
Pacific Boychoir
San Francisco Girls Choir
San Francisco Symphony
Michael Tilson Thomas, conductor

Booklet für Mahler: Symphony No. 8, "Symphony of a Thousand" - Adagio from Symphpony No. 10