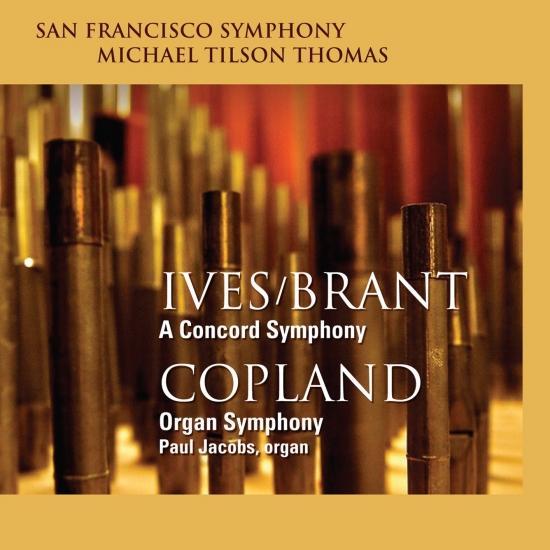 Michael Tilson Thomas and the San Francisco Symphony follow their recently completed Mahler cycle with a series of new live recordings, including the Henry Brant arrangement of Ives’ Concord Symphony uniquely paired with Copland’s Organ Symphony featuring Paul Jacobs.
Following the recent completion of their award-winning and ground-breaking Mahler recording project, Michael Tilson Thomas and the San Francisco Symphony will continue to bolster their discography with recordings from both the core classical repertoire as well as works new to or rarely heard by audiences. The new recordings reflect the broad range of programming that has been a hallmark of the 15-year MTT/SFS partnership. The new releases, recorded live in concert in the orchestra’s home Davies Symphony Hall, and mastered in 96kHz, 24bit.
Amongst the first of these new releases is Ives’ Concord Symphony arranged by Pulitzer-prize winning composer Henry Brant, uniquely paired with Copland’s Organ Symphony featuring Paul Jacobs.
“[The Concord Mass] demands playing of tireless energy and gentle lyrical touch. This superb orchestra rises to the challenges, although the players sound more at ease with the long, clear lines musical lines of Copland's magnificent Organ Symphony. It's difficult to imagine a finer performance than this one, with a mighty solo instrument and the orchestra beautifully balanced against each other.” (Classic FM Magazine)
“In 'Emerson', Tilson Thomas is a sure guide to the music's emotional breadth as Brant hears it...Similarly in 'Hawthorne', Tilson Thomas renders the more extrovert passages - such as the jazzy episode near its centre - with undeniable verve.” (International Record)
“Paul Jacobs faultlessly exploits this fine score. With this degree of drama, eloquence and style, it's the ideal recording of this incomprehensibly neglected work...Brant has added an imposing document to the Ives repertoire and these two live recordings are a stunning success.” (Gramophone Magazine)
“The live recording...is absolutely stunning, with the organ clearly spaced in Davies Hall, allowing Paul Jacobs to be in the foreground, and yet an integral part of the orchestra, as the composer intended.” (BBC Music Magazine)
The Concord Sonata by Charles Ives (1874-1954), a towering classic of piano literature, emerged into being over many decades. Its first sketches date to 1904 and its final revision to 1947, but mostly Ives concentrated on it from 1916 to 1919. When he first committed it to publication, in 1920, he described it as “an attempt to present [an] impression of the spirit of transcendentalism that is associated in the minds of many with Concord, Mass., of over a half century ago.” He continued, “This is undertaken in impressionistic pictures of Emerson and Thoreau, a sketch of the Alcotts, and a scherzo supposed to reflect a lighter quality which is often found in the fantastic side of Hawthorne.”
The Canadian-born composer Henry Brant (1913-2008) was inspired by Ives’s ideas, and by the 1950s had grown so obsessed with the Concord Sonata that he began transcribing it for full orchestra. He reported: “From 1958 until 1994 I worked on A Concord Symphony in odds and ends of spare time in between teaching, commercial orchestration and my own experimental composing. In undertaking this project, my intention was not to achieve a characteristically complex Ives orchestral texture (which in any case, only he could produce), but rather to create a symphonic idiom which would ride in the orchestra with athletic surefootedness and present Ives‘s astounding music in clear, vivid, and intense sonorities.”
Following its premiere the work became widely hailed as an important statement of Modernism, and Copland’s name was linked to those of Henry Cowell, Carl Ruggles, and Edgard Varèse as an influential new voice in music. The nicest compliment of all came from the composer Virgil Thomson, who succeeded Copland as a student of Boulanger’s in France. Years later he would say, “The piece that opened the whole door to me was that Organ Symphony of Aaron’s. I thought that it was the voice of America in our generation.” But when the piece was new, Copland was delighted by the following exchange between Boulanger and Thomson: “When she asked Virgil Thomson his opinion of the Organ Symphony, he said, ‘I wept when I heard it.’ Nadia asked, ‘But why did you weep?’ Virgil replied, ‘Because I had not written it myself!’” (James M. Keller, excerpt from liner notes)
San Francisco Symphony Orchestra
Michael Tilson Thomas, conductor
Paul Jacobs, organ