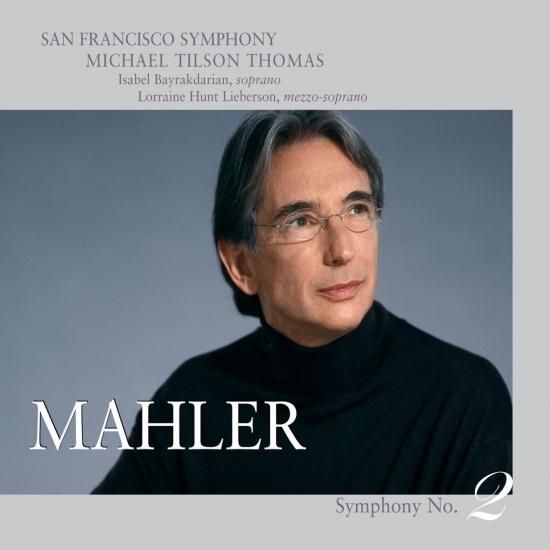 The Michael Tilson Thomas-San Francisco Symphony Mahler cycle achieved legendary status almost immediately upon its inauguration in 2002. It has amassed acres of critical acclaim and numerous international awards. Symphony No. 2, “Resurrection” was recorded live in San Francisco’s Davies Symphony Hall in June 2004. It is a performance that illuminates the deeply serious and sweetly innocent, music that conjures visions of apocalypse and heaven, thrilling right up to the finale. Joining MTT and SFS are the Grammy-winning SFS Chorus, the young Canadian-Armenian soprano Isabel Bayrakdarian, and the noble mezzo Lorraine Hunt Lieberson.
In February 1888, Gustav Mahler began a large orchestral piece called Todtenfeier, or Funeral Rites. Mahler realized that Todtenfeier was not an independent piece but the first movement of a second symphony. In 1894, Symphony No. 2 was completed. The present recording incorporates revisions Mahler made up to 1909. The Second Symphony is often called the “Resurrection,” but Mahler himself gave it no title.
The first movement celebrates a dead hero, retaining its original Todtenfeier aspect. The second and third movements represent retrospect, the former being innocent and nostalgic, the latter including a certain element of the grotesque. The fourth and fifth movements are the resolution and deal with the Last Judgment, redemption and resurrection.
Writing to the critic Arthur Seidl in 1897, he refers to the three middle movements as having the function only of an “interludium.” There is, as well, the question of breaks between movements. The score is explicit, specifying a pause “of at least five minutes” after the first movement and demanding that the last three movements follow one another without interruption.
The Andante is composed as a kind of intermezzo (like some lingering resonance of long past days from the life of him whom we bore to his grave in the first movement—something from the days when the sun still smiled upon him). The first and last movements are the symphony’s biggest. In other ways, they are as different as possible, partly because of the six years that separate them, still more crucially because of their different structural and expressive functions. (Edited excerpt from booklet)
Isabel Bayrakdarian, soprano
Lorraine Hunt Lieberson, mezzo-soprano
San Francisco Symphony Chorus & Orchestra
Michael Tilson Thomas, conductor