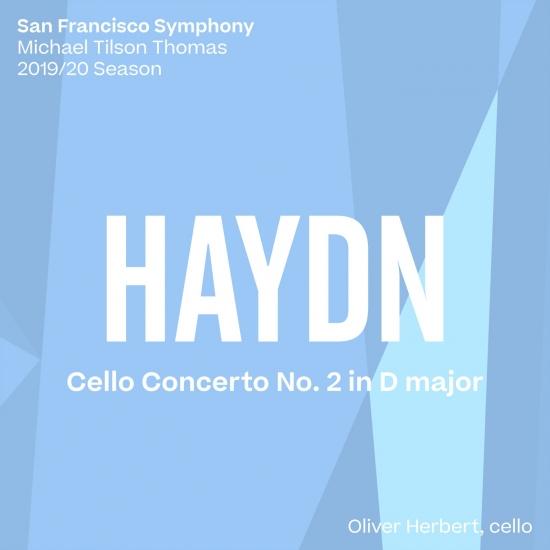 SFS Media is the San Francisco Symphony’s (SFS) in-house label, launched in 2001. SFS Media records and releases audio and visual material reflecting the Orchestra and Music Director Michael Tilson Thomas’s commitment to showcasing music by maverick composers as well as core classical masterworks. Oliver Herbert made his San Francisco Symphony subscription debut on September 26 playing Haydn’s Cello Concerto No. 2 with Michael Tilson Thomas.
From San Francisco Classical Voice: “Oliver Herbert was the soloist, and he was a knockout. His technical command, full-throated but never indulgent tone, crisp yet expressive phrasing, and tactful use of vibrato flowed together. The development section in the first movement had a sense of exploratory wonder, as did the bravura cadenza. Herbert found drama in something as simple as a four-step rise in the Adagio. If the Rondo lacked a measure of playfulness, the soloist made it dance. MTT and the band partnered respectfully, even deferentially.
Youthful but magisterial, with a tendency to audible breathing, Herbert cut a dramatic figure onstage. The audience adored him Thursday. A star, it seemed, was found and embraced.” Steve Winn
From the San Francisco Chronicle: “Amid the Stravinskiana came a revelation of a different sort — a generous and beautifully light-footed performance of Haydn’s Cello Concerto No. 2 with Oliver Herbert as soloist. Herbert is something of a hometown figure, having grown up here and played with the Symphony Youth Orchestra (his father, David Herbert, was once the Symphony’s principal timpanist).
For the Haydn, whose solo part lies high and forward, Herbert conjured up a bright and gentle string tone that allowed the concerto’s melodies to register with deceptively soft-spoken potency. The tricky pyrotechnics essential to any concerto came through cleanly, but even more impressive were the dexterity and sweetness that Herbert brought to his assignment — an alluring contrast to the hard-edged Stravinskian rigor of the rest of the evening.” Joshua Kosman
San Francisco Symphony
Michael Tilson Thomas, conductor