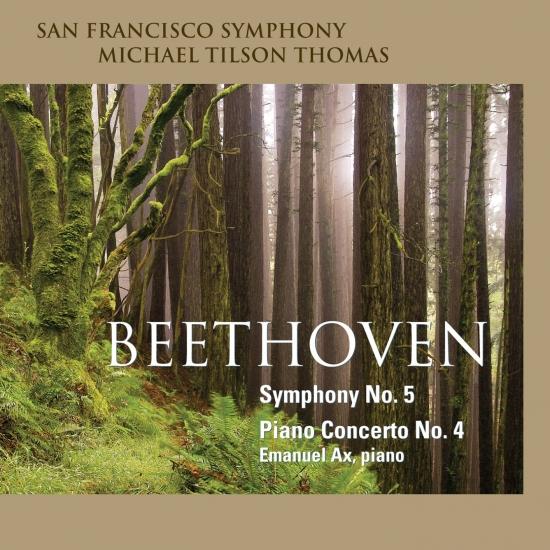 Michael Tilson Thomas and the San Francisco Symphony follow their recently completed Mahler cycle with a series of new live recordings, including an all-Beethoven disc featuring the Fourth Piano Concerto with Emanuel Ax, and Symphony No. 5.
Following the recent completion of their award-winning and ground-breaking Mahler recording project, Michael Tilson Thomas and the San Francisco Symphony will continue to bolster their discography with recordings from both the core classical repertoire as well as works new to or rarely heard by audiences. The new recordings reflect the broad range of programming that has been a hallmark of the 15-year MTT/SFS partnership. The new releases, recorded live in concert in the orchestra’s home Davies Symphony Hall, will be available in 96kHz, 24bit.
The first of these new releases includes an all Beethoven-recording featuring the composer’s Symphony No. 5 and Piano Concerto No. 4 with world-renowned pianist Emanuel Ax.
“Tilson Thomas's interpretation is free of any mannerism, but it is alive in every bar, full of passion, and marvellously played and recorded. A work which can lead to feelings of having been listened to, or anyway heard, too often, blazes from the speakers and defies one to feel familiar with it. To achieve that at this stage is an astonishing achievement.” (BBC Music Magazine)
“This pairing is a sure-fire winner - two of Beethoven's most venerated works, performed by musicians of acute sensibility and enviable faculties of interpretation...We expect the impossible from fresh recordings of the Fifth Symphony nowadays...but if you're simply after a crisply attacked, consistently stirring performance of the work, unfettered by spurious gimmickry, look no further. The orchestra is electric in this performance.” (International Record Review)
San Francisco Symphony Orchestra
Michael Tilson Thomas, conductor
Emanuel Ax, piano
Recorded live at Davies Symphony Hall, San Francisco, December 9-12, 2009