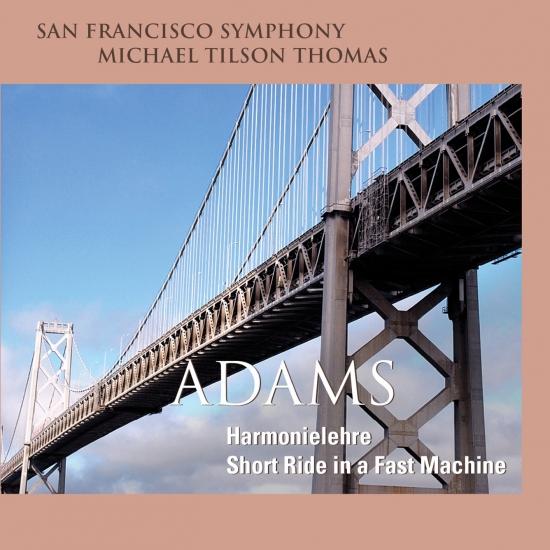 Michael Tilson Thomas and the San Francisco Symphony present an album of John Adams' San Francisco Symphony commissioned Harmonielehre and the Michael Tilson Thomas commissioned Short Ride in a Fast Machine.
The SFS commissioned, premiered, and recorded Harmonielehre in March 1985 under Edo De Waart during Adams’ tenure as SFS composer in residence. Adams recalled, “I was a young composer when I wrote Harmonielehre and I had really only written two other orchestra pieces at that point and one of them was Harmonium, which was premiered by the San Francisco Symphony only a few years before that. Harmonielehre was tough coming out… I was searching for what I wanted to say. I knew that part of what I wanted to write for the orchestra was a music that would kind of strum the strings of its repertoire that would play to its strengths… [with Harmonielehre] I really confronted who I was, who I am, John Adams as a composer - somebody who grew up listening to classical music, classical orchestral music, who played in orchestras when I was younger, who conducted, who loved that repertoire, but at the same time was somebody who also grew up listening to jazz and rock and who was very influenced by minimalism. So it’s this rather strange marriage of the driving pulse of American minimalism and the sensuous and emotional and expressive world of the great European masterpieces.”
Michael Tilson Thomas, who conducted the work during his first season as SFS Music Director in 1995 and multiple times since, said of the work, “When a new piece is premiered, it can make a stunning impression. But the real story of that piece is what emerges over time. When the SFS first performed Harmonielehre in the mid-80s it was a life changing moment for everybody who heard it. I heard it first on the recording and I was drawn into the piece in so many ways, its enormous power, but also its tenderness and depth of expression. And now, decades later, the piece still stands up.”
MTT commissioned Short Ride in a Fast Machine from John Adams in 1986 for a Pittsburgh Symphony performance in Massachusetts. Adams shared, “Michael called me back in 1986 when he was opening a new music festival in Massachusetts with the Pittsburgh Symphony and he asked me to do a fanfare. The sort of traditional fanfare with blaring trumpets didn’t really appeal to me, and how do you write a fanfare when Copland has already done it so well? I thought about it and for some reason the connection with Cape Cod came to mind. Years before that I had been there with a former brother-in-law and he had asked me at about 1 in the morning if I would like to take a ride with him in his Lamborghini. I did and once he started up I wished I hadn’t because he drove very, very fast. The idea of a piece that had that combination of excitement and thrill and was just on the edge of anxiety or terror was the motivating force for [Short Ride in a Fast Machine.] The piece starts with the click of the wood block and that wood block never changes, it just keeps driving and it’s sort of like a gauntlet through which a 100-piece orchestra has to pass.”
“Adams has a closer relationship with the San Francisco Symphony than any other orchestra, so it’s fitting that Michael Tilson Thomas’s band should release superb recordings of two of Adams’s finest orchestral pieces to mark its centenary...Performances are supremely clear, cogent and virtuosic.” (The Times)
“[Harmonielehre] requires a very safe pair of conductor's hands to smooth out its eclectic fissures. Michael Tilson Thomas is about as safe as one could wish for...both live recordings serve to reinforce Tilson Thomas and the San Francisco Symphony's status as true champions of Adam's orchestral music.” (Gramophone Magazine)
“More than in previous recordings, Michael Tilson Thomas's superbly paced approach conveys the music's sense of vast surrounding spaces, and the momentum of the biggest passages is the more thrilling for being cannily unrushed.” (BBC Music Magazine)
“These are masterly live performances played with intensity and radiant with character. The recording is first class, vividly clear and excellently balanced.” (MusicWeb International)
San Francisco Symphony
Michael Tilson Thomas, conductor