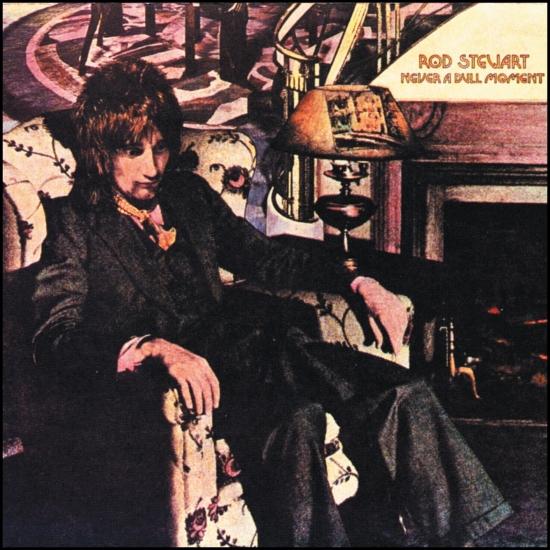 „Never A Dull Moment“ picks up where „Every Picture Tells A Story“ left off. Here we have more raucous rock & roll with healthy dollops of soul and twang thrown in for good measure. Always looking for a good songwriter to cover, Stewart's honorees here include Jimi Hendrix ('Angel'), Dylan ('Mama You Been On My Mind'), and Rod's personal hero, Sam Cooke ('Twistin' The Night Away').
Sidling up nicely next to these heartfelt interpretations are some of Stewart's finest original songs. Teaming with spiritual brother Ron Wood, Stewart offers up the cheeky 'Italian Girls' and 'True Blue,' a track that goes along at a mid-tempo clip before exploding into a heartfelt rave-up. Most notable is a collaboration with Martin Quittenton on 'You Wear It Well,' an irresistible addition to the Stewart canon.
Although the Sam Cooke cover is the one spot where the soulful Scot would be expected to indulge his R&B jones, Etta James's 'I'd Rather Go Blind' is where Rod brings it all back home with a slow-burning vocal that wraps itself around the strolling tempo of the song. While not quite up to the perfection of „Every Picture Tells A Story“, „Never A Dull Moment“ follows closely in its footsteps, and weighs in as Stewart's last classic album of the early '70s.
„Rod Stewart firmly puts to rest the rumor that he is just another pretty face. His voice is in top form and none of that oddly ingratiating sandpaperness or sardonic good humor has been sacrificed. Hovering precariously on the verge of tears he can swiftly change and ignite a vocal exuberance seldom heard elsewhere. Excelling in such cuts as 'Angel,' 'Lost Paraguayos' and the late Sam Cooke's 'Twistin' the Night Away.' (Billboard, 1972)
The album hit # 1 in the UK and reached #2 in the US. 'You Wear It Well' and 'Twisting the Night Away', were huge international single hits.
Rod Stewart, vocals
Ron Wood, guitar, acoustic guitar, electric guitar
Martin Quittenton, guitar, acoustic guitar
Gordon Huntley, steel guitar
Pete Sears, piano
Spike Heatley, upright bass, acoustic bass guitar
Ronnie Lane, bass guitar
Kenny Jones, drums
Mickey Waller, drums
Speedy, congas
Dick Powell, violin
Ian McLagan, piano, organ
Engineered by Mike Bobak, Glyn Johns, Mike Bobak, Glyn Johns
Produced by Rod Stewart
Digitally remastered