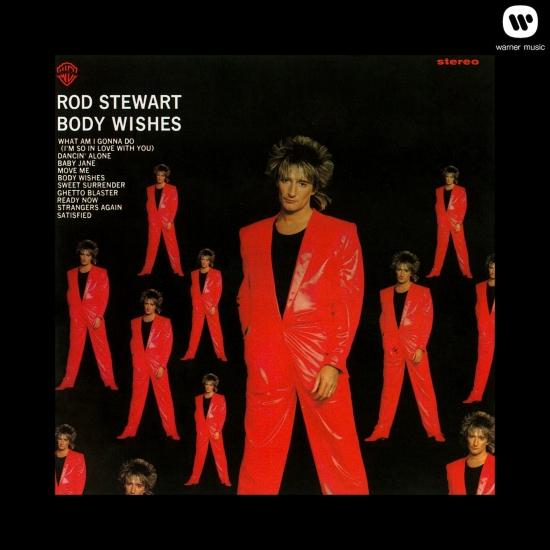 The gruff-voiced, shaggy-haired singer/songwriter was still in his disco phase on this 10 cut album, which features the hit singles 'Baby Jane and 'What Am I Gonna Do (I'm So In Love With You), as well as the groovers 'Dancin' Alone' and 'Satisfied.'
'After listening to Body Wishes, Rod Stewart's latest and surely one of his least, you get the feeling that this singer is sorely in need of what comedian Henny Youngman calls 'a charisma bypass.' Except for the album's opener, 'Dancin' Alone,' a Chuck Berry-style rock & roller that's both lively and witty, there's nothing here — singing, playing, melodies, lyrics, production, arrangements — that you'll remember thirty seconds after you've heard it. Not much energy either. Just by-rote dance tunes, lachrymose (and unbelievable) love songs, a silly revenge ditty and the world's most unconvincing protest number ('Ghetto Blaster').
Sadly, Stewart, for a long time a genuine great one, seems to have passed over into that gaudy, rather meaningless land occupied by such people as Dolly Parton and Burt Reynolds — people whose main occupation is Stardom, and precious little else. When this esteemed position is reached, it doesn't matter what one does anymore — a minimum of competence and a maximum of product are the rules — as long as one just shows up. And shows up. And shows up. (Paul Nelson, Rolling Stone)
Rod Stewart, vocals
Jim Cregan, vocals, guitar, acoustic guitar, electric guitar, background vocals
Tony Brock, vocals, drums, percussion, background vocals
Robin LeMesurier, guitar, acoustic guitar, electric guitar
Jimmy 'Z' Zavala, flute, harmonica, saxophone
Kevin Savigar, keyboards, synthesizer
Tommy Vig, percussion
Jay Davis, background vocals
Recorded at Plant, Los Angeles
Engineered by George Tutko and Jim Cregan
Digitally remastered