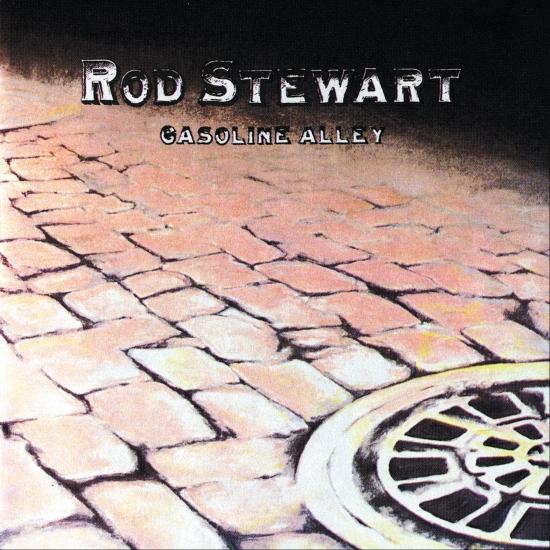 Although songs like the Stewart-penned 'Lady Day' and 'Jo's Lament' show off the bawdy Scot's more introspective side, 'You're My Girl (I Don't Want To Discuss It)' is a hearty slice of rock & roll that could easily be a Faces number (seeing as Ron Wood, Ronnie Lane, and Kenny Jones back him up here). With GASOLINE ALLEY serving as a stylistic blueprint, the table was set for many of this album's participants to return and partake in the creation of „Every Pictures Tells A Story“, Stewart's most successful album ever. With the help of his drinking buddies and members of the Faces (often one and the same), Rod Stewart made his breakout hit album, „Gasoline Alley“.
The marriage of bottleneck guitar and mandolin, abundant barrelhouse piano, and Rod the Mod's passionate rasp were the beginnings of a sound associated with Stewart up through the mid-'70s. After covering the Stones, Ewan McColl and Mike D'Abo on his debut album, Stewart included tunes by Dylan ('Only A Hobo'), Bobby Womack ('It's All Over Now'), and Elton John ('Country Comforts') for the follow-up.
„Gasoline Alley“ was equally strong. With Stewart's folk heart thum- ping, the dignified empathy of 'Only a Hobo' saw him beginning a minicareer of covering Dylan consistently better than anyone else; 'Gasoline Alley' marked the cementing of the Stewart-Wood alliance. The blending of slide guitar and hoarse-voiced yearning is a thing of rare beauty, and when the duo elsewhere kicks it up on homages to the Stones and Eddie Cochran, rock seldom sounds freer or more fun.' (Rolling Stone)
Rod Stewart, vocals, acoustic guitar
Ron Wood, guitar, acoustic guitar, bass
Sam Mitchell, guitar
Dennis O'Flynn, violin, bass violin
Martin Quittenton, guitar, acoustic guitar
Stanley Matthews, mandolin
Dick Powell, violin
Ian McLagan, piano, organ
Pete Sears, piano
Ronnie Lane, bass
Kenney Jones, drums
Mickey Waller, drums
Digitally remastered