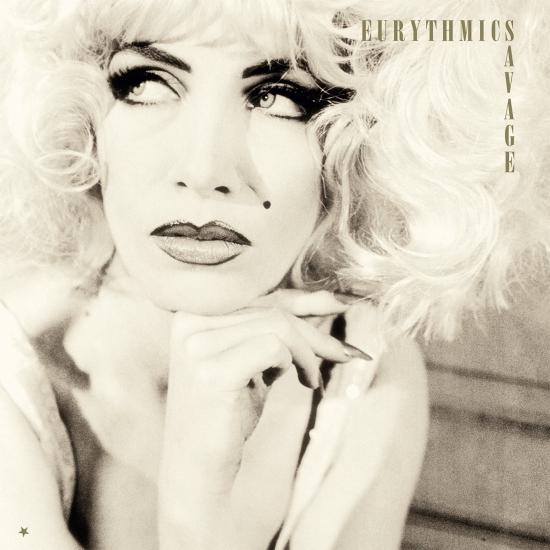 Savage is the seventh album by the British pop music duo Eurythmics, released in 1987.Following the much more mainstream commercial content of their previous two albums, Savage saw Eurythmics "turn sharp left" (as band member Dave Stewart put it), returning to the much more experimental sound that their early albums incorporated. Produced in France (recorded at Chateau de Dangu in Normandy and mixed at Grand Armée Studios in Paris), the album made heavy use of the NED Synclavier digital sampling keyboard. The only other musician working on the recordings with Stewart and Annie Lennox was drummer Olle Romo, who handled much of the Synclavier programming. Lennox brought more of a feminist focus to her lyrics which was made more evident by the accompanying video album, which featured a video for each song.
“We could have carried on making stadium rock, but in keeping with our somewhat eclectic nature, we decided we were going to make a really esoteric electronic album,” says Dave Stewart of the follow-up to Revenge. Stewart bought a digital sampling keyboard known as a Synclavier and things went on from there. The title track – “Savage” is an amazing piece of raw emotion, lyrically set to a wall of “Eno - esque” guitars and synths. The first single, “Beethoven” is as strange a track as one could wish for from the ‘odd couple’ and the video directed by Sophie Muller drew things even further into the world of surrealism. “You Have Placed a Chill in my Heart” again merges electronica with heartfelt vocals and lyrics, making for another Eurythmics bittersweet single and video. Released in 1987, ”Savage” was complimented by a Grammy nominated long form video album.
Annie Lennox, vocals, keyboards, programming
David A. Stewart, guitar, keyboards, production, programming, backing vocals
Olle Romo, programming
Digitally remastered
Zur Info: wir bieten dieses Album in der nativen Abtastrate von 44.1 kHz, 24-Bit an. Die uns zur Verfügung gestellte 96 kHz-Version wurde hochgerechnet und bietet keinen hörbaren Mehrwert!