We Too Are One (Remastered) Eurythmics 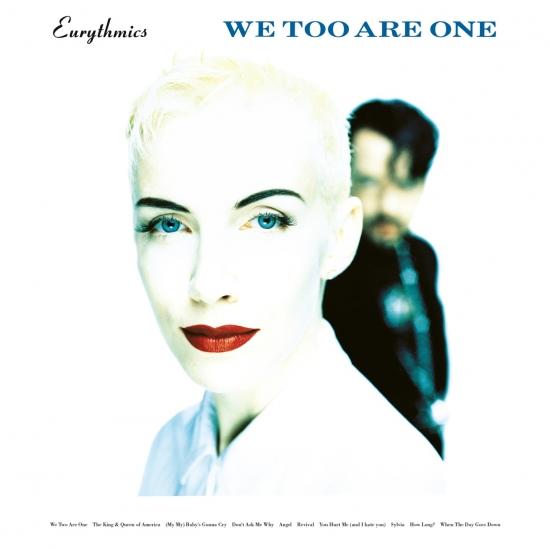 Info zu We Too Are One (Remastered)

Over the next few days we’ll be celebrating the 25th Anniversary of the release of the Eurythmics We Too Are One Album.
We Too Are One was the seventh studio album released by Eurythmics on 11th September 1989. It turned out to be the last studio release for a decade until 1999’s Peace.
The cover featured the two pictures above taken by renowned photographer Jean Baptiste Mondino.
When it was released in 1989, the album went straight to number one in the UK, where it has since been certified double platinum. The album produced four singles, all of which reached the UK top 30: “Revival”, “Don’t Ask Me Why”, “The King and Queen of America”, and “Angel”. In the United States, “(My My) Baby’s Gonna Cry” was also released as a single but failed to chart.
A companion home video, We Two Are One Too, was released in 1990 and featured the promotional videos for the five singles from the album and other footage of the band performing the album’s other tracks. This is actually the only commercial release of the promo video for the 1989 single “Revival”, which was never included on any subsequent video compilations from the band.
"Switching to Arista Records in the U.S., Eurythmics made their last album together with We Too Are One, and they went out in style. Calling upon a broad pop range, their seventh album was their best since Be Yourself Tonight in 1985. The sound was varied, the melodies were strong, and the lyrics were unusually well-crafted. In retrospect, the album can be seen as a dry run for Annie Lennox's debut solo album, Diva (1992); songs like "Don't Ask Me Why" (which grazed the U.S. Top 40) serve as precursors to the dramatic ballads to come. There is, however, an air of romantic resignation throughout We Too Are One, appropriate to its valedictory nature. The disc spawned four chart singles in the U.K. and returned Eurythmics to number one in the album charts, but it did not substantially improve Eurythmics' reduced commercial standing in the U.S., confirming that it was time for Lennox and Dave Stewart to pursue other opportunities." (William Ruhlmannm, AMG)
Annie Lennox, vocals
David A. Stewart, guitar, vocals
Olle Romo, drums
Pat Seymour, keyboards
Charlie Wilson, background vocals
Chucho Merchán, bass guitar, programming
Produced by David A. Stewart, Jimmy Iovine
Digitally remastered