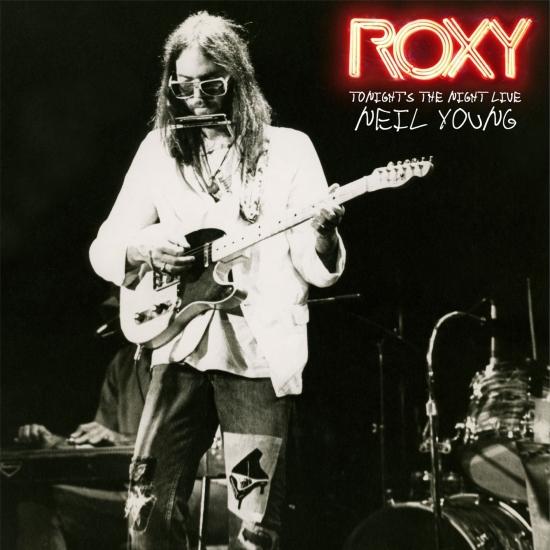 Roxy - Tonight's The Night Live is one of the most sought-after recordings from his vast archives. This was the first public performance of many of the songs that would make up Young's seminal album Tonight's The Night, which would not be released until June 1975. The album's final track "Walk On" would not appear until the release of On The Beach, in July 1974. Young would be the first artist to christen the stage at what would become one of the world's great clubs, The Roxy Theater on the riotous Sunset Strip, right next door to the already infamous Rainbow Bar & Grille. The shows took place on September 20-22, 1973.
Produced by Young and the late David Briggs, these resultant recordings were mixed by John Nowland with updated post-production and mastering by John Hanlon - along with Chris Bellman - at Bernie Grundman Mastering using the original analog master tape source. Close your eyes and you'll be right there in that dark, smoky, 500 capacity room in West, L.A. on a hot summer night in 1973. Tonight's The Night would go on to be named one of Rolling Stone's 500 Greatest Albums Of All Time, and universally praised for it's dark honesty and unapologetic raw delivery. The very same can be said for Roxy - Tonight's The Night Live.
"In 1973, I drove my 1947 Buick Roadmaster, Black Queen, to LA from the North, accompanied by Ben Keith. Once we made it to Hollywood, we met up with Billy Talbot and Ralph Molina. Nils Lofgren joined us and we drove to Studio Instrument Rentals on Santa Monica Blvd. David Briggs, producer, and Johnny Talbot, equipment manager, met us there. They had blasted a hole in the wall to connect the green board which we had set up (an old tube board I had purchased that had been used recording many historic sessions from the Beach Boys' Pet Sounds to Monterey Pop Festival, among many others) next to the rehearsal hall. Our 16-track analog tape machine was set up next to the board. We had finished recording TTN and decided to celebrate with a gig at a new club opening on the Sunset Strip, the ROXY. We went there and recorded for a few nights, opening the ROXY. We really knew the Tonight's the Night songs so we just played them again, the album, top to bottom, two sets a night for a few days. We had a great time. ROXY -Tonight's the Night Live is the live recording we made. There is a little Super 8 footage of us driving to the gig in the Black Queen one of those nights." (Neil Young)
Neil Young, guitars, vocals, piano
Ben Keith, pedal steel, slide guitars, vocals
Billy Talbot, bass
Ralph Molina, drums, vocals
Nils Lofgren, piano, vocals, guitars
Digitally remastered