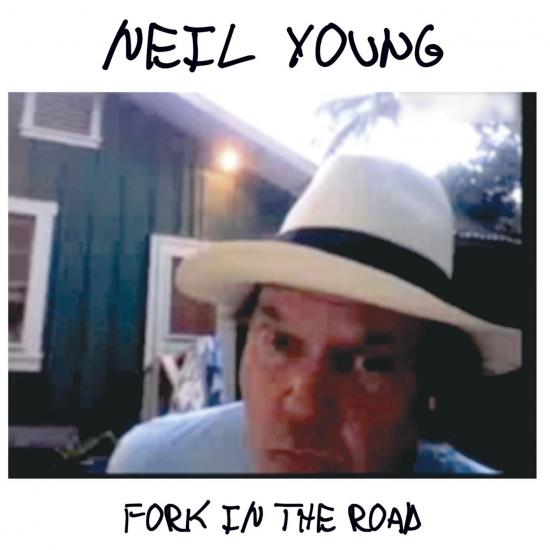 Info for Fork In the Road (Remastered)

Rock and Roll Hall of Famer Neil Young is stirring things up again. This time he is rolling on down the road not only with an auto-centric concept album but with his own electric ride.
'Fork in the Road', whose largely ecocar themed songs he debuted in concert during 2008/2009, will get a promotional push from the 1959 Lincoln Continental Young has converted to hybrid technology - and which he plans to drive to Washington, D.C.
With 'Fork in the Road' as current as today's headlines, the controversial and mad-as-hell Neil Young is still rockin' the free world and once more is taking the road less traveled.
"It somehow is fitting that Fork in the Road arrived in stores a week after President Barack Obama announced his bail-out plan for the American automobile industry: it's Neil Young's one-man campaign to remind everybody what cars used to mean and what they should be again. Neil always has had a soft spot for cars -- he drove a hearse from Toronto to Los Angeles, immortalizing the vehicle in "Long May You Run" -- so this album-length motor manifesto couldn't be called unexpected, nor could its palpable, ever-flowing undercurrent of nostalgia be a surprise for a man who owns a toy train company. Plus, romanticizing the classic years of Detroit is natural; those big boats were gorgeous, so unlike the colorless, characterless sedans that rule the road these days. Neil knows this and knows that dependence on oil is crippling the culture, not to mention the environment, and is enough of an evangelist to cobble together his own green machine, putting an electric engine in a 1959 Lincoln Continental, driving the car to Washington and writing a whole album about the vehicle and its downtrodden times. Fittingly, Fork in the Road is like his Lincvolt: it has a new engine in an old body, so it has all of the classic contours but runs a little differently. The Lincvolt might be smooth and efficient, but Fork in the Road is charmingly clunky, a side effect of its quick creation and Young's hard-headedness. Neil might be writing records as quickly as a blogger these days but musically he's stuck in the past, never letting go of his chunky Les Paul and candied folk harmonies, embracing his status as an old crank so enthusiastically he happily presents himself as a crazy old coot on the album's cover. At times, he certainly does sound like the resident codger, snarling about the fading economy and how everybody's been downsized, good naturedly sneering "big rock star/my sales have tanked/I still got you/thanks" on the title track. Despite the undercurrent of auto nostalgia here, Young isn't living in the past and he's keenly aware of the present. This blend of dreamy thoughts of yesteryear, spitting fury over the present, and planning for the future gives Fork in the Road a bit of a kick that propels it through a few songs that aren't much more than a garage groove, but the whole thing benefits from its messiness; the loose ends make it feel alive." (Stephen Thomas Erlewine, AMG)
Neil Young, electric and acoustic guitar, vocals
Ben Keith, lap steel guitar, electric guitar, Hammond B-3 organ, vocals
Anthony Crawford, electric and acoustic guitar, piano, Hammond B-3 organ, vocals
Pegi Young, vibes, acoustic guitar, vocals
Rick Rosas, bass
Chad Cromwell, drums
Produced by Neil Young, Niko Bolas
Digitally remastered