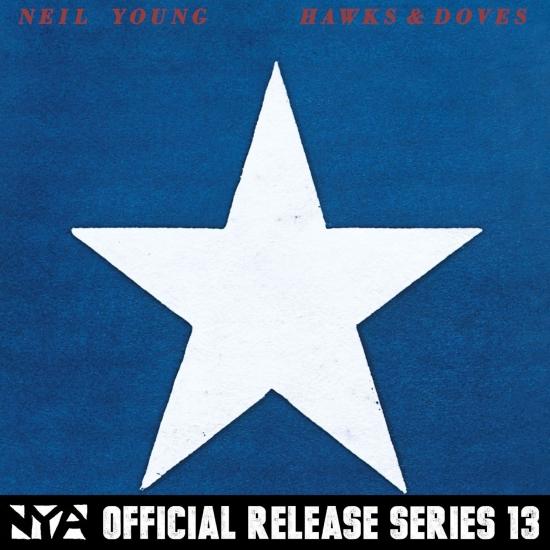 The 10th studio album from Neil Young, Hawks & Doves was released in 1980. The first side contains songs culled from session dates between 1974 and 1977. Side two features songs recorded specifically form the album in early 1980.
"Following the triumph of Rust Never Sleeps, Hawks & Doves benefited from the enormous critical goodwill Neil Young had amassed, though fans and critics nevertheless were baffled by its set of obscure acoustic and country-tinged songs. The seven-plus-minute "The Old Homestead" (copyright 1974) was interpreted by some as an allegory for Young's relationship to CSNY, perhaps because that was the only way to make any sense of the most mysterious Young lyric since "The Last Trip to Tulsa." In retrospect, now that it's known Young was distracted by domestic medical concerns while working on the album, its theme of perseverance in the face of adversity, both in a personal context of family commitment ("Stayin' Power," "Coastline"), and in a national context of hard work and patriotism ("Union Man," "Comin' Apart at Every Nail," "Hawks & Doves") seems more apparent, as does the sense that Young may have been trying to fulfill his recording contract (even with the inclusion of trunk songs like "The Old Homestead," the album runs less than half an hour) while devoting a bare minimum of his time and attention to the effort. The result is correspondingly slight." (William Ruhlmann, AMG)
Neil Young, guitar, harmonica, piano, vocals
Greg Thomas, drums
Dennis Belfield, bass
Ben Keith, steel and Dobro, harmony vocals
Rufus Thibodeaux, fiddle
Ann Hillary O'Brien, harmony vocals
Levon Helm, drums on "The Old Homestead"
Tim Drummond, bass on "The Old Homestead"
Tom Scribner, saw player on "The Old Homestead"
Digitally remastered