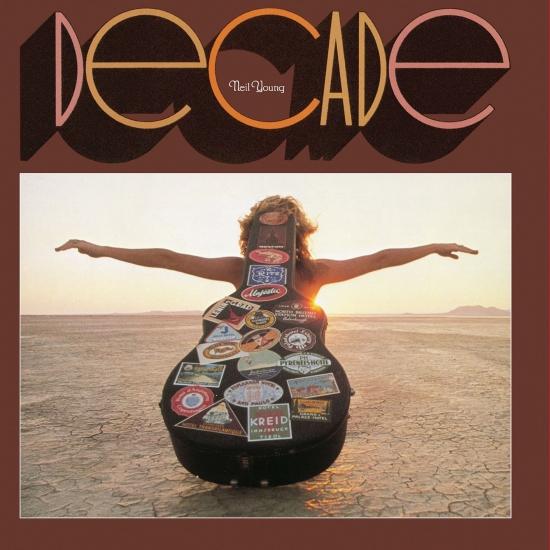 Decade was a long-awaited, much anticipated Neil Young project. By 1977, I was already accustomed to some of the ways Neil worked, how he delayed projects indefinitely and then some of them never came out (the Homegrown album and Chrome Dreams, for example) and Decade was supposed to have been released in '76 but had been delayed. When it was finally released in late '77 I rushed to buy it and it was filled with great stuff for fans.
Covering the years between 1966-1976, „Decade“ is a solid overview that shows off the many sides of the always iconoclastic Neil Young. Starting with Young's work in Buffalo Springfield, some of the nuggets include the psychedelic calliope that is "Down To The Wire" and the fuzz guitar/Motown-inspired "Mr. Soul." Throughout these ten years of recordings, Young constantly dug deep, touching on controversial topics be it his CSN&Y masterpiece about the student massacre at Kent State ("Ohio"), compositions dealing with the ups and downs of the drug culture ("Needle And The Damage Done," "Tonight's The Night") or history's dark chapters of racial injustice ("Cortez The Killer," "Southern Man").
Neil Young's choice of accompanists also allowed him to explore many different avenues. Crazy Horse provided the sonic wallop that bore such fruit as "Like A Hurricane," whereas The Stray Gators provided the springboard for more countrycentric numbers like "Heart Of Gold" and "Harvest." Other welcome inclusions are "Star Of Bethlehem" and "Deep Forbidden Lake," from „Homegrown“, the unreleased sequel to „Harvest“. The solid material on this compilation and accompanying liner notes by Neil Young make this an essential part of any record collection.
„Given the quirkiness of Neil Young's recording career, with its frequent cancellations of releases and last-minute rearrangements of material, it is a relief to report that this two-disc compilation is so conventional and so satisfying. A 35-track selection of the best of Young's work between 1966 and 1976, it includes songs performed by Buffalo Springfield, Crosby, Stills, Nash & Young, and the Stills-Young Band, as well as solo work. In addition to five unreleased songs, Decade offers such key tracks as the Springfield's "Mr. Soul," "Broken Arrow," and "I Am a Child"; "Sugar Mountain," a song that had appeared only as a single before; "Cinnamon Girl," "Down by the River," and "Cowgirl in the Sand" from Everybody Knows This Is Nowhere; "Southern Man" and the title track from After the Gold Rush; and "Old Man" and the chart-topping "Heart of Gold" from Harvest. This is the material that built Young's reputation between 1966 and 1972, although he is more idiosyncratic with the later material, including the blockbusters "Like a Hurricane" and "Cortez the Killer" but mixing in more unreleased recordings as the set draws to a close. He seems intent on making the album a listenable one that will appeal to a broad base of fans, and he succeeds despite the exclusion of much of the harrowing work of 1973-1975. Nevertheless, the album is an ideal sampler for new listeners, and since there is no one-disc Young compilation covering any significant portion of his career, this lengthy chronicle is the place to start.“ (William Ruhlmann, AMG)
Neil Young, guitar, harmonica, piano, vibes, vocals
Produced by Neil Young, Elliot Mazer, Tim Mulligan, David Briggs
Digitally remastered
Please Note: we do not offer the 192 kHz version of this album, because there is no considerable or audible difference to the 96 kHz version!