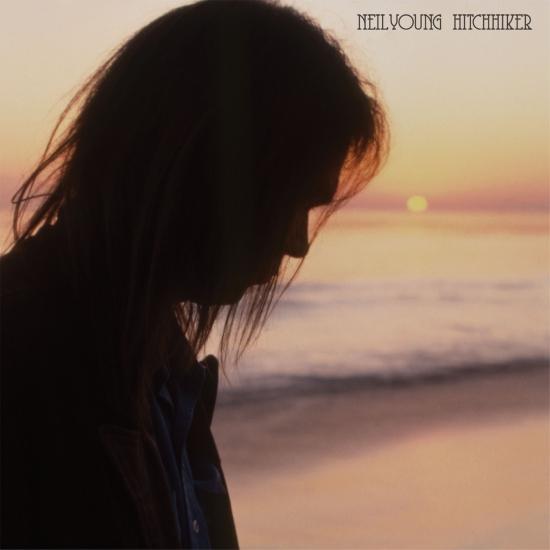 The unreleased solo acoustic album recorded in 1976, which includes includes solo, acoustic songs recorded in 1976 at the Indigo Ranch Studios in Malibu, California and featuring 2 previously unreleased songs!
Although Hitchhiker isn't Neil Young's first abandoned album to be unearthed later, it's certainly his most realized — impressive, given these songs were recorded quickly in a single session in 1976. Armed with only an acoustic guitar and harmonica (and a studio piano for "The Old Country Waltz"), Young left the studio that evening having recorded some of his strongest songs to date; he envisioned the lo-fi recording to be released as is before Reprise, his record label, flat-out objected.
After he abandoned the recordings, Young used rerecordings of eight of these songs on a series of future albums between 1977's American Stars 'n Bars ("The Old Country Waltz") and 2010's Le Noise ("Hitchhiker"). Elsewhere, songs like "Pocahontas" and "Powderfinger" (both redone with Crazy Horse for 1979's Rust Never Sleeps), along with the underrated "Campaigner" (re-recorded for 1977 collection Decade) and "Human Highway" (later on 1978's Comes a Time) show just how fertile and adventurous of a songwriter Young had become by the mid '70s.
Although it would be easy (but erroneous) to overlook this collection as an unessential novelty (especially since one of the two unreleased songs, "Hawaii," stands as a bit of a throwaway), it's fascinating to hear these songs sequenced together, as the album takes on a bit of a new narrative that shows 1976-era Young as a man out on his own, fearing the unknown while dealing with the harsh realities of life, as laid out by songs like "Powderfinger," "Give Me Strength" and the title track.
Although Young's had plenty of highs and lows throughout his sprawling discography, there's no question that each of his 38 studio LPs were results of a particular vision, and Hitchhiker benefits greatly from this fleeting vision captured over a single evening in 1976.
„Recorded over the course of one lazy, stoned day in Malibu in 1976, Hitchhiker was never bootlegged, unlike Homegrown and Chrome Dreams, its unreleased cousins from the mid-'70s. Neil Young first let its existence be known in 2014, when he mentioned a 1976 solo acoustic session recorded with longtime producer David Briggs that was "a complete piece." Most of the songs from that complete piece drifted out in different versions over the years, starting with the appearance of "Campaigner" on 1977's Decade -- the only time a song from this session saw the light of day prior to its complete release in 2017 -- running through three songs on Rust Never Sleeps and ending in 2010, when "Hitchhiker" showed up on Le Noise. At the time of the release of that Daniel Lanois-produced record, Young claimed that "Hitchhiker" was left "unfinished" until 2010, but any longtime Young watcher knows he's at his best when he doesn't tie up loose ends, which is one of the reasons Hitchhiker is compelling. Although Young is correct when he claims Hitchhiker is a "complete piece" -- it sustains a dusky sweetness from beginning to an end -- it is certainly not a polished album. Often, it feels as if Young is singing with no intention of his music being heard by a wider audience, but the presence of Briggs at the board means this doesn't sound like a ragged demo. Instead, Hitchhiker holds together as a mood piece, an album where Young slowly reckons with a new dawn after surviving a hectic mid-'70s. It is the epilogue to his "Ditch Trilogy," the descent into darkness that began with 1973's Time Fades Away and ended with 1975's Tonight's the Night, an album where the melancholy undercurrent never overwhelms the suggestion of cautious optimism. This delicate tone is what separates Hitchhiker from the shelved Chrome Dreams or Rust Never Sleeps, the two records that rely so heavily on shared material with this album. Those records are assured and confident, the work of somebody who has shaken off the ghosts who were stalking him. On Hitchhiker, Young still isn't certain if he's exorcized those demons, and that unease gives just enough complexity to the album's soothing ebb and flow.“ (Stephen Thomas Erlewine, AMG)
Neil Young, vocals, guitar
Recorded August 11, 1976 at Indigo Ranch Recording Studio in Malibu, California
Produced by Neil Young, David Briggs, John Hanlon
Digitally remastered
Please Note: We offer this album in 96 kHz, 24-bit. The provided 192 kHz version was up-sampled and offers no audible value! Even the 96 kHz Version barely reaches a good enough spectrum.