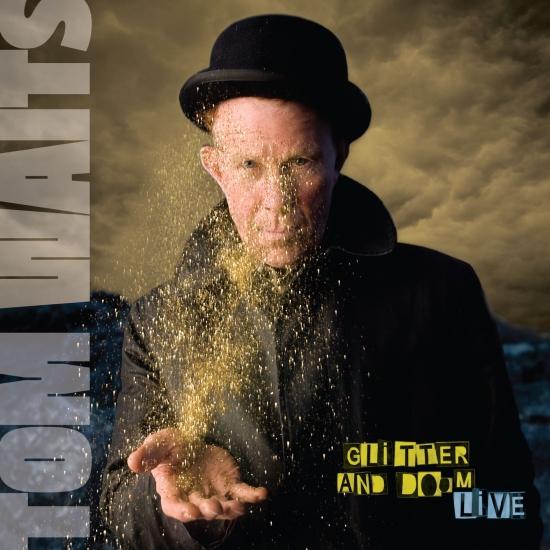 Glitter and Doom is a double album collection of the best of the best tracks from Tom Waits' sold out, highly acclaimed Glitter and Doom tour of the US and Europe in the summer of 2008.
Album 1 is designed to sound like one evening's performance, even though the 17 tracks are selected from 10 cities, from Paris to Birmingham; Tulsa to Milan; and Atlanta to Dublin. Sonically the album is superb and has been beautifully recorded and meticulously mastered. Album 2 is a bonus compendium called TOM TALES, which is a selection of the comic bromides, strange musings, and unusual facts that Tom traditionally shares with his audience during the piano set. Waits' topics range from the ritual of insects to the last dying breath of Henry Ford.
Musically, the live disc features all eras of Waits' eclectic glory as he shifts seamlessly from an array of characters: carnival barker, preacher, country singer, soul balladeer; cabaret singer and storyteller. Backed by a versatile 5 piece band, Waits departs from the songs' original incarnations. The songs instrumentation and rhythms are rearranged and reimagined. Swampy tribal rhythms, ominous hymns, gypsy flavored ballads, searing rhythmic r&b, and blues boogies. angular and surreal rock are all present. The songs, as expected ,are about hanged men, woebegone sailors, sword swallowers, fugitives, shamans, ghosts, dance instructors and prison guards.
In 2008, Tom Waits launched a sold out national tour, garnering intense critical praise Paste magazine called it the best live show of 2008 and thrilling fans across the country and the world, some in cities where Waits had never played before. Now comes the document of those concerts, 17 performances hand picked by Waits from along the tour. Leaning heavily on songs from his ANTI releases including a haunting Trampled Rose from Real Gone and roaring Get Behind the Mule from Mule Variations Waits also digs into the vaults for tracks like a reimagined Singapore from 1985’s Rain Dogs. Glitter and Doom Live will reside in the Waits catalog alongside earlier live albums like Nighthawks at the Diner and Big Time, both discs held on par with his classic studio releases by fans.
Tom Waits, vocals, guitar
Seth Ford-Young, upright bass, bass
Vincent Henry, woodwinds and harmonica
Omar Torrez, guitar, banjo
Casey Waits, percussion
Sullivan Waits, clarinet
Patrick Warren, keyboards
Produced by Kathleen Brennan, Tom Waits
Digitally remastered