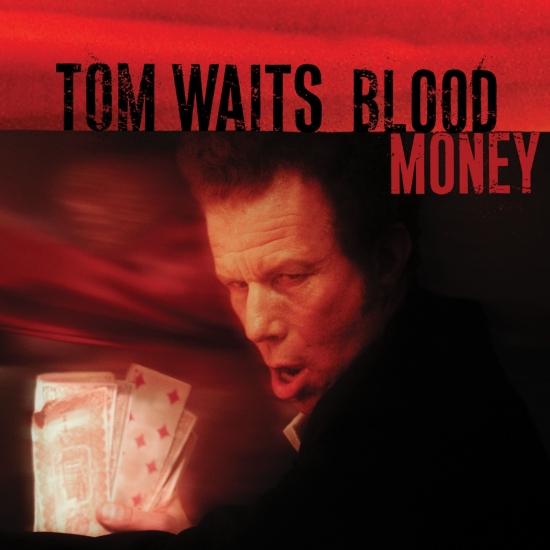 Blood Money is based on the socio/political play "Woyzeck," originally written by a young German poet Georg Buchner as a spare, cinematic piece in 1837 and inspired by the true story of a German soldier who was driven mad by bizarre army medical experiments and infidelity, which led him to murder his lover. Waits, along with wife and collaborator Kathleen Brennan, wrote songs for an avant-garde production of "Woyzeck" directed by Robert Wilson, which premiered in November 2000 at the Betty Nansen Theater in Copenhagen and went on to win Denmark's version of the Tony for Best Musical. The album careens from the brutal to the tender with assaulting rhythms and romantic melodies. It's a grim musical deposition on the human condition, a dark mortality play where Tin Pan Alley meets the Weimer Republic."Blood Money is flesh and bone, earthbound," said Waits. "The songs are rooted in reality: jealousy, rage, the human meat wheel...They are more carnal. I like a beautiful song that tells you terrible things. We all like bad news out of a pretty mouth. I like songs to sound as though they've been aging in a barrel and distressed."
„Tom Waits has said: "I like a beautiful song that tells you terrible things. We all like bad news out of a pretty mouth." When it comes to the material on Blood Money, I don't know if I can call Waits' mouth pretty, but he certainly offers plenty of bad news in a very attractive, compelling way. Released simultaneously with Alice, a recording of songs written in 1990, Blood Money is a set of 13 songs written by Waits and Kathleen Brennan in collaboration with dramatist Robert Wilson. The project was a loose adaptation of the play Woyzeck, originally written by German poet Georg Buchner in 1837. The play was inspired by the true story of a German soldier who was driven mad by bizarre army medical experiments and infidelity, which led him to murder his lover -- cheery stuff, to be sure. Thematically, this work -- with its references to German cabarets and nostalgia -- echoes Waits' other Wilson collaborative project, Black Rider. Musically, however, Blood Money is a far more elegant, stylish, and nuanced work than the earlier recording. With bluesman Charlie Musselwhite, reedman Colin Stetson, bassist and guitarist Larry Taylor, marimbist Andrew Borger, and others -- Waits plays piano, organ, marimba, calliope, and guitar -- this is a theater piece that feels like a collection of songs that reflect a perverse sense of black humor and authentic wickedness in places. The protagonists of these songs are so warped and wasted by life that they are caricatures; it's impossible not to like them and to not be repulsed by yourself for doing so. For starters, the set opens with "Misery Is the River of the World," a circus-like tango wrapped around a series of dialectical aphorisms: "If there's one thing you can say about mankind/There's nothing kind about man." When a piano cascades up a minor scale in dramatic showmanship, Waits chants the refrain, "Misery is the river of the world," with seeming delight. On "God's Away on Business" (with guests Stewart Copeland on drums and PJ Harvey guitarist Joe Gore) the rhythm first displayed on Bone Machine resurfaces and fills out the backbeat. It's almost a march in its depth and dimension, giving the entire track the feeling of an evil seven dwarfs about to roast Snow White for dinner: "I'd sell your heart to the junkman, baby/For a buck, for a buck/If you're looking for someone to pull you out of that ditch/You're out of luck, out of luck." This is bleak, disturbing, and hysterically funny. It's not all snakes and alligators, however. In "Coney Island Baby," Waits delivers one of his most memorable and moving love songs while playing the chamberlain in front of the band, who plays an old-time waltz laced through with gorgeous cello and trumpet slipping ethereally through the mix. Waits croons without affectation or droopy sentiment: "Every night she comes/To take me out to dreamland/When I'm with her/I'm the richest man in the town/She's a rose/She's a pearl/She's the spin on my world/All the stars make wishes on her eyes." Likewise, the track that follows it, "All the World Is Green," is a paean of love from the soldier to his wife and "Another Man's Vine" boasts the most overtly sensuous use of the word "bougainvillea" in a pop song. In all, Blood Money, like its sister, Alice, is a record steeped in musical and lyrical traditions barely remembered by popular culture and hence very rarely evoked (from carnival marches to tarantellas, primitive tangos, and early 20th century jazz). This isn't the other side of Tin Pan Alley, but an appreciation for and evocation of the music of the Weimar Republic with its easy pathos and often grotesque funhouse humor. That said, this appreciation does not make for a re-creation; Waits' music is his own from this particular place in time, but it illustrates and illuminates particular kinds of human foibles from the present era and celebrates them as human nonetheless.“ (Thom Jurek, AMG)
Tom Waits, vocals, piano, guitars, organ
Joe Gore, guitar
Bebe Risenfors, bass clarinet, accordion
Colin Stetson, baritone saxophone, clarinet
Nik Phelps, trumpet, tuba
Matt Brubeck, cello
Dawn Harms, violin
Charlie Musselwhite, harmonica
Gino Robair, marimba, bells, gong
Bent Clausen, marimba
Larry Taylor, bass
Stewart Copeland, drums
Produced by Kathleen Brennan, Tom Waits
Digitally remastered