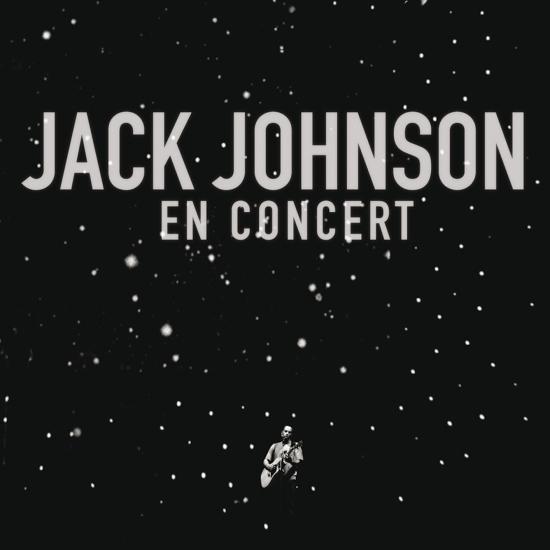 „Whether you love Jack Johnson, or find his amiable island charm a little too mild for your post-modern comfort, props must be given for his confidently re-creating a niche for acoustic singer/songwriter fare that had its heyday in the '70s. Not since then has a young artist seemed so comfortable projecting a sunny, angst-free persona, in service of a folk-derived, heart-centered musical agenda. His legions of multi-generational fans suggest that the genre, which thrives on gentle charisma, prolific live appearances, and native comfort in concert settings both intimate and grand, was probably due for a revival. This live album (and accompanying DVD) captures Johnson performing for an adoring mob in his home state of Hawaii, as well as in San Francisco, Paris, Barcelona, New Hampshire, and other locales.
Although the renditions here are mostly identical to the versions on his solo albums and numerous soundtracks, he gently breathes new life into them by retooling some of his best-loved numbers into crowd-pleasing medleys. This works to good effect on the album opener 'Belle/Banana Pancakes,' which pairs a featherweight bossa nova with a bluesy shuffle about domestic bliss, accompanied by roars of approval and recognition from a Parisian audience. Another skilled segue matches Johnson's lightly funky 'Bubble Toes' with Charles Wright's '70s soul hit 'Express Yourself' -- most likely the only shared reference in the respective repertoires of Jack Johnson and N.W.A -- and displays the singing surfer's earthy ease with an R&B groove.
Considering the abundance of live Johnson recordings and the existence of the concurrent concert film, does it makes sense to buy this album? Fans and completists will want to own it anyway, but the additional pull for even casual listeners is that all proceeds from the CD's sales will benefit the Kokua Hawaii Foundation and the Johnson Ohana Charitable Foundation.“ (Paula Carino)
Jack Johnson, vocals, guitar
Zach Gill, vocals, keyboards
Merlo Podlewski, bass
Adam Topol, drums
Digitally remastered