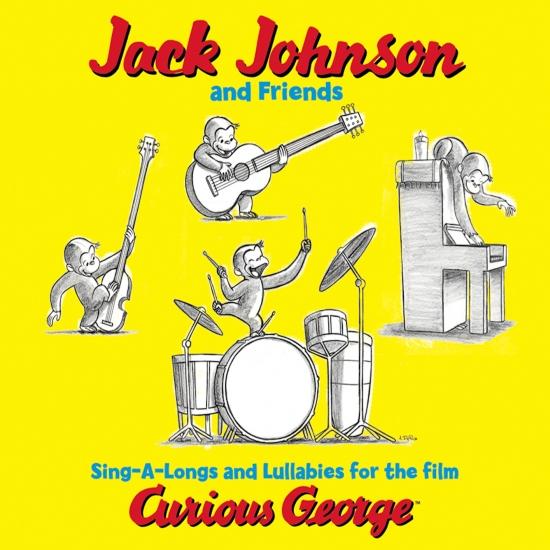 Sing-A-Longs and Lullabies for the film Curious George is a soundtrack album by Jack Johnson and friends for the 2006 film Curious George. Along with Johnson, it features Adam Topol, Ben Harper, G. Love, Kawika Kahiapo, Matt Costa, Merlo Podlewski and Zach Gill.
This was the first soundtrack to make it to #1 since the Bad Boys II Soundtrack in August 2003 and was the first soundtrack to an animated film to top the Billboard 200 since the Pocahontas soundtrack reigned for one week in July 1995.
„Admit it: If you had to pick an artist to give voice to the wackadoo thinkings of a monkey beloved by most of the American populace over age 3, you could do a lot worse than Jack Johnson. Black Eyed Peas? Too hyper. Death Cab for Cutie? Too ironic. They Might Be Giants? Too eggheaded. Johnson, though the object of much rightful jealousy--here, after all, is a guy who only stumbled into music and vaulted himself up the charts after a successful career as a pro surfer--turns out to have the goods to do H.A. Rey, Curious George's creator, proud. Fans familiar with Johnson's earlier discs will recognize a certain laconic sprawl and easy fascination in his songs that suits the theme of perpetual puzzlement perfectly (here, let's not forget, is a guy who racked up fans with songs called 'Bubble Toes' and 'Banana Pancakes'). That the music takes a childish turn barely registers--songs like opener 'Upside Down' are classic Johnson, all wonderment and groove, and the collaborations with friends Ben Harper, G. Love, and Matt Costa warm up, wink, and scamper off before packing on the weight of excess meaning. 'We're Going to Be Friends,' track seven, seals the deal--when you can make the White Stripes sound compatible with the Man with the Yellow Hat, you know you've got a multi-generational winner.“ (Tammy La Gorce)
Jack Johnson, vocals, guitar, ukulele
Zach Gill, vocals, piano
Merlo Podlewski, bass guitar
Adam Topol, drums
Additional musicians:
Ben Harper, vocals, guitar (on 'With My Own Two Hands“)
G. Love, vocals, guitar, harmonica (on 'Jungle Gym“)
Matt Costa, vocals, guitar (on 'Lullaby“)
Kawika Kahiapo, guitar (on 'Talk Of The Town“)
Recorded at The Mango Tree, Hawaii November 2005
Mixed and engineered by Robert Carranza
Mastered by Bernie Grundman
Produced by Jack Johnson and Robert Carranza
Digitally remastered