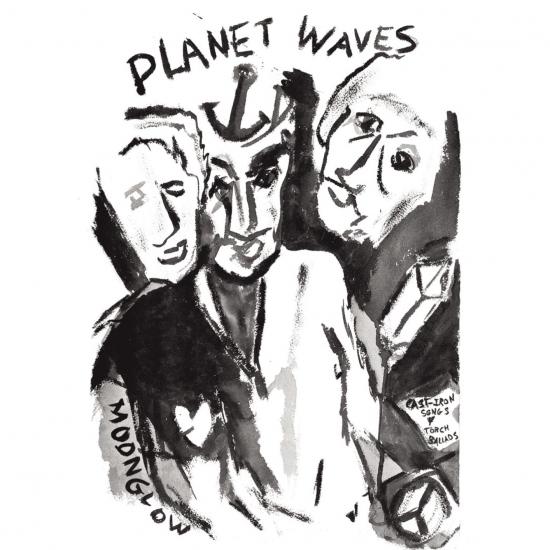 The cover of „Planet Waves“ bears the inscription 'cast-iron songs and torch ballads,' proving that Dylan was a skilled assessor of his own work. 'There are those who worship loneliness/But I'm not one of them,' he sings on 'Dirge,' a disclaimer for the ghostly, pensive atmosphere that pervades much of the album. Though Dylan is backed by members of the Band here, „Planet Waves“ has little of the sprawling, tongue-in-cheek weirdness of Band collaborations like „The Basement Tapes“. Instead, the mood is serious, intimate, and introspective.
Dylan explores both sides of the romantic coin here. 'You Angel You' and 'On a Night Like This' (a tune that proved jubilant enough to be covered by Buckwheat Zydeco) are upbeat paeans to being in love. The aforementioned 'Dirge' brings us into the belly of the beast, as Dylan faces up to his loneliness and pain with customary aplomb: 'I paid the price of solitude/But at least I'm out of debt.' Throughout, the Band supply verve and poignancy as required. Dusky gems like the solo acoustic ballad 'Wedding Song,' where the singer proudly opens his heart over a haunting minor-key melody, and the platitude-heavy 'Forever Young' add to this fine, often-overlooked album from Dylan's early-'70s period.
„Reteaming with the Band, Bob Dylan winds up with an album that recalls New Morning more than The Basement Tapes, since Planet Waves is given to a relaxed intimate tone -- all the more appropriate for a collection of modest songs about domestic life. As such, it may seem a little anticlimactic since it has none of the wildness of the best Dylan and Band music of the '60s -- just an approximation of the homespun rusticness. Considering that the record was knocked out in the course of three days, its unassuming nature shouldn't be a surprise, and sometimes it's as much a flaw as a virtue, since there are several cuts that float into the ether. Still, it is a virtue in places, as there are moments -- 'On a Night Like This,' 'Something There Is About You,' the lovely 'Forever Young' -- where it just gels, almost making the diffuse nature of the rest of the record acceptable.“ (Stephen Thomas Erlewine, AMG)
Bob Dylan, guitar, piano, harmonica, vocals
Rick Danko, bass
Levon Helm, drums
Garth Hudson, organ
Richard Manuel, piano, drums
Robbie Robertson, guitars
Recorded November 2, 5, 6, 8, 9 and 14, 1973, Village Recorder, West Los Angeles, California
Engineered by Rob Fraboni
Produced by Rob Fraboni
Digitally remastered