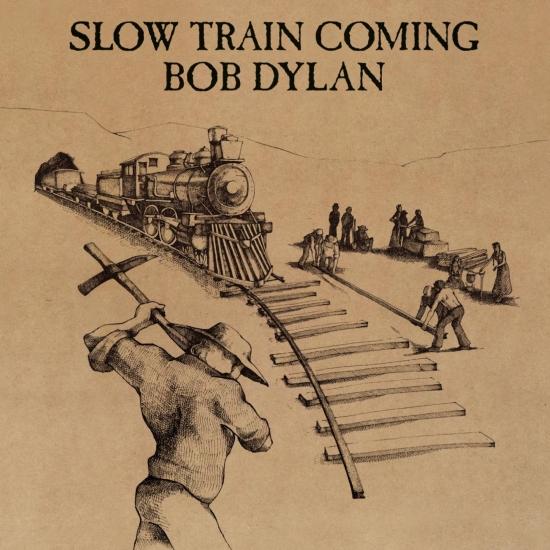 Of all the pitstops made by the nomadically creative Dylan, none was more unusual than his brief conversion to Christianity in the late '70s. „Slow Train Coming“ was the first of two records (SAVED being the other) that found Zimmerman exploring his newfound faith. Recorded at Memphis' famed Muscle Shoals Studios and produced by soul vets Jerry Wexler and Barry Beckett, „Slow Train Coming’s“ supporting cast includes Dire Straits' Mark Knopfler on guitar and Pick Withers on drums, along with a handful of studio musicians.
Knopfler's crisp guitar playing is surrounded by a punchy horn section and a phalanx of female background singers who are a perfect compliment to Dylan's revitalized vocals. Songs such as 'When He Returns' and 'Gonna Change My Way Of Thinking' reverberate with the conviction of Dylan's new faith whereas 'When You Gonna Wake Up' simultaneously celebrates America's greatness as a country and warns of the need to seek a new set of values. Dylan eventually won a Best Rock Vocal Grammy for 'Gotta Serve Somebody,' but the enigmatic one renounced his conversion to Christianity by 1983.
„Perhaps it was inevitable that Bob Dylan would change direction at the end of the '70s, since he had dabbled in everything from full-on repudiation of his legacy to a quiet embrace of it, to dipping his toe into pure showmanship. Nobody really could have expected that he would turn to Christianity on Slow Train Coming, embracing a born-again philosophy with enthusiasm. He has no problem in believing in a vengeful god -- you gotta serve somebody, after all -- and this is pure brimstone and fire throughout the record, even on such lovely testimonials as 'I Believe in You.' The unexpected side effect of his conversion is that it gave Dylan a focus he hadn't had since Blood on the Tracks, and his concentration carries over to the music, which is lean and direct in a way that he hadn't been since, well, Blood on the Tracks. Focus isn't necessarily the same thing as consistency, and this does suffer from being a bit too dogmatic, not just in its religion, but in its musical approach. Still, it's hard to deny Dylan's revitalized sound here, and the result is a modest success that at least works on its own terms.“ (Stephen Thomas Erlewine, AMG)
Bob Dylan, guitar, vocals
Additional musicians:
Barry Beckett, keyboards, percussion
Mickey Buckins, percussion
Carolyn Dennis, background vocals
Tim Drummond, bass
Regina Havis, background vocals
Mark Knopfler, lead guitar
Muscle Shoals Sound Studio, horns
Helena Springs, background vocals
Pick Withers, drums
Recorded April 30 – May 11, 1979 at at Muscle Shoals Sound Studio, Muscle Shoals, Alabama
Engineered by Gregg Hamm
Produced by Barry Beckett and Jerry Wexler
Digitally remastered