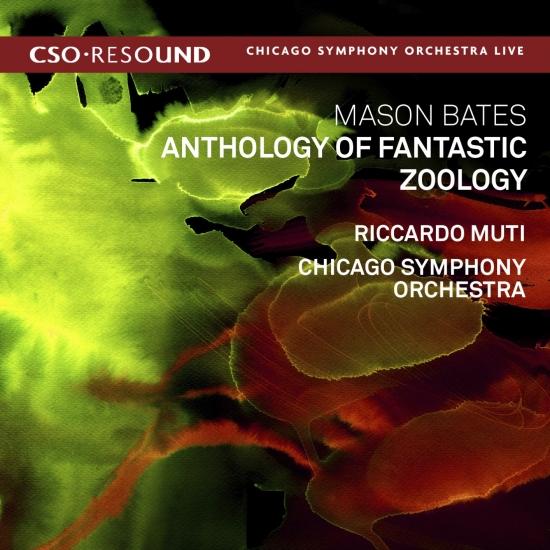 Anthology of Fantastic Zoology is a 35-minute acoustic work that can be described as a concerto for orchestra, drawing its subject matter from the strange creatures found in Jorge Luis Borges’ book of magical realism by the same title. This 11-movement work contains short musical depictions of fantastic creatures, from sprites, nymphs and sirens, to gryphon, naga (evil snakes) and a Zaratan—an animal which is an island. Between these picture-pieces are transitional movements which take the listener deeper into the forest world that these surreal creatures populate—and further into the night—all culminating in an epic episode with all the creatures in motion at the witching hour just before dawn. Though Bates is widely known for his use of electronica and recorded material in his compositions, no electronic sounds were used in this piece. Instead the colorful orchestration and playful motifs give the music an almost “electronic” sound, all the while drawing on the virtuosic abilities of the CSO’s musicians, many of whom Bates had in mind as he composed Anthology.
Mason Bates’ Anthology of Fantastic Zoology was performed and recorded live in June 2015 on CSO subscription concerts at Orchestra Hall in Chicago. Written as a farewell to the CSO after five years of serving as one of two Mead Composers-in-Residence alongside Anna Clyne, the piece was dedicated to Music Director Riccardo Muti, whose “unique abilities as a musical dramatist” Bates credited as his inspiration, “from beginning to end.” Of the 2015 world premiere performance, Chicago Tribune music critic John von Rhein noted, “how brilliantly engineered and integrated are the score's sly sonic quirks and how beautifully the music plays to the strengths of the Chicago musicians,” also calling it a “grand, playful, surprising, exuberantly colorful concerto for orchestra.” Anne Midgette of The Washington Post added that Bates “writes big pieces for orchestra that are essentially 21st-century tone poems, or musical narratives.... In short, he forges into new territory, but on terms that the establishment can embrace.”
Prior to the performances of Mason Bates’ Anthology of Fantastic Zoology, Muti and the CSO gave the 2012 world premiere of Bates’ Alternative Energy for orchestra and electronics, commissioned by the CSO. The so-called “energy symphony” also received performances by the CSO in 2012 concerts in Michigan, California and at New York’s Carnegie Hall led by Muti and was included in a digital-only CSO Resound recording released along with Anna Clyne’s Night Ferry in 2014.
American composer Mason Bates currently serves as the first composer-in-residence for the Kennedy Center for the Performing Arts. Bates was appointed Mead Composer-in-Residence at the CSO in 2010, a position he held for five years concluding in 2015. With works championed by such leading conductors as Michael Tilson Thomas, Leonard Slatkin, and Riccardo Muti, Bates has quickly become a staple on contemporary music programs, recently being recognized as the second most-performed living composer in a survey of the 2014/15 orchestral season released by the Baltimore Symphony Orchestra. With a varied compositional style which draws from his work in electronic music as a DJ and his interest (and degree) in literature, Bates has established himself as a multifaceted and innovative composer.
Recorded live in June 2015 at Orchestra Hall, Mason Bates: Anthology of Fantastic Zoology was engineered by Emma Dayhuff and produced by Grammy® Award winner David Frost. Previously with the CSO, Frost produced albums of music by Berlioz and Prokofiev, as well as Verdi’s Messa da Requiem and Otello, all conducted by Riccardo Muti, and a collection by the CSO Brass. Muti and the CSO’s first recording together—Verdi’s Messa da Requiem with the Chicago Symphony Chorus, released in 2010—won two Grammy® awards for Best Classical Album and Best Choral Performance. Their second, Verdi’s Otello, also with the Chorus, was released in 2013, and won an International Opera Award. Muti’s third and fourth recordings with the CSO, Riccardo Muti Conducts Mason Bates and Anna Clyne, and Prokofiev: Suite from Romeo and Juliet were both released in 2014. Muti’s latest recording with the CSO, Berlioz’s Symphonie fantastique and Lélio, was released in September 2015.
Chicago Symphony Orchestra
Riccardo Muti, conductor

CHIC are one of the superpowers of late-’70s disco, a mixed-gender band from New York City that provided some of the biggest and most enduring hits of the Studio 54 era.
Best know for: A pair of epochal #1 pop smashes in “Le Freak” and “Good Times,” as well as club classics like “I Want Your Love,” “Everybody Dance” and “Dance, Dance, Dance (Yowsah, Yowsah, Yowsah).” “Good Times” in particular has provided one of the great through-threads of the last 30 years of pop music, with its legendary bass line appearing (in various incarnations) in pop songs ranging from Queen’s “Another One Bites the Dust” to Daft Punk’s “Around the World”—and, most notably, providing the hook for Sugarhill Gang’s “Rappers’ Delight,” the song that brought hip-hop to the masses.
In addition to the irrepressible “Good Times,” Chic have made their influence felt through the production and songwriting work that group masterminds Nile Rodgers and Bernard Edwards did for other artists of their era, including Sister Sledge (“We Are Family”) and Sheila B. and Devotion (“Spacer”), as well as established artists looking to get on the disco bandwagon like Diana Ross (“Upside Down”) and David Bowie (“Let’s Dance”) and some of the biggest artists from next generation of pop, like Madonna (“Like a Virgin”) and Duran Duran (“A View to a Kill”). Oh, and French dance artist Modjo sampled their “Soup For One” for their 2001 hit “Lady (Hear Me Tonight),” which is pretty cool.