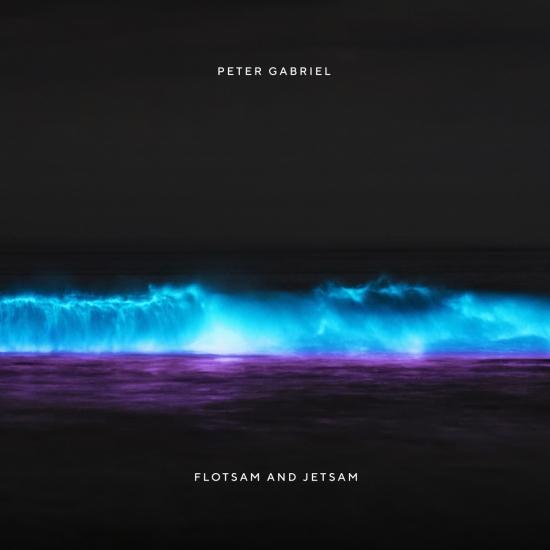 Flotsam and Jetsam is a digital only collection of B-sides, remixes and rarities from across Peter Gabriel’s solo career. Over 60 tracks are featured, mostly all of which had previously been released physically, either on 7”, 12” or CD singles, soundtrack or tribute albums over the years but never released digitally. A few notable inclusions are available commercially for the very first time anywhere.
The collection – arranged chronologically – is split into three eras:
The first, 1976-1985, covers the period from Peter first going solo to the end of his run of four self-titled solo albums. It opens with a cover version of ‘Strawberry Fields Forever’, the first time Peter featured on a release after leaving Genesis. Also included is a previously unreleased extended version of ‘Slowburn’, the extended outro single version of ‘Perspective’, the re-recorded version of ‘D.I.Y.’ for the single’s re-issue in late 1978 and the alternate mix of ‘I Don’t Remember’ which appeared as the B-side to ‘Games Without Frontiers’ in advance of the PG3 album. There’s also the German version of ‘Here Comes the Flood’ and the ‘Shock the Monkey (instrumental)’ that uses the alternative audio version from Deutsches Album.
The second, 1986-1993, are Peter’s popstar years with music released around the albums So and Us. Included is the previously unreleased full version of ‘Don’t Break This Rhythm’, an edited version having been the B-side to ‘Sledgehammer’, ‘Curtains’ the B-side to ‘Big Time’ and ‘Bashi-Bazouk’ from the ‘Digging in the Dirt’ single. There’s ‘GA GA (I Go Swimming Instrumental)’, which is the studio version of a song known to fans from the Plays Live album and Nile Rogers’ single mix of ‘Walk Through the Fire’. Also in this section are numerous remixes from the likes of Massive Attack, William Orbit, The Bomb Squad (famed for their work with Public Enemy) and David Bottrill.
Finally, the third era is 1994-2016 and features music from before and after the Up album and brings us pretty much up to date. There’s Peter’s version of ‘Summertime’ from the Larry Adler ‘Glory of Gershwin’ album, ‘Suzanne’ from the ‘Tower of Song’ Leonard Cohen tribute album and ‘In the Sun’ a cover of the Joseph Arthur song that featured on the Diana tribute album.
Alternate versions used in films include the Robbie Robertson mix of ‘I Have the Touch’ that featured in ‘Phenomenon’ and features a verse not on any other version, ‘I Grieve’ from City of Angels and the Gangs of New York version of ‘Signal to Noise’. There’s also ‘The Veil’, written especially for the Oliver Stone movie ‘Snowden’.
Remixes come from Röyksopp, Martyn Bennett, Trent Reznor, Tricky, Elbow, The Polyphonic Spree and Steve Osborne. The full version of ‘Courage’, the Broad mix of ‘Curtains’ and the Daniel Lanois & Richard Chappell mix of ‘Father, Son’ are released here for the first time.
Digitally remastered