Quadrophenia (Super Deluxe Edition) The Who 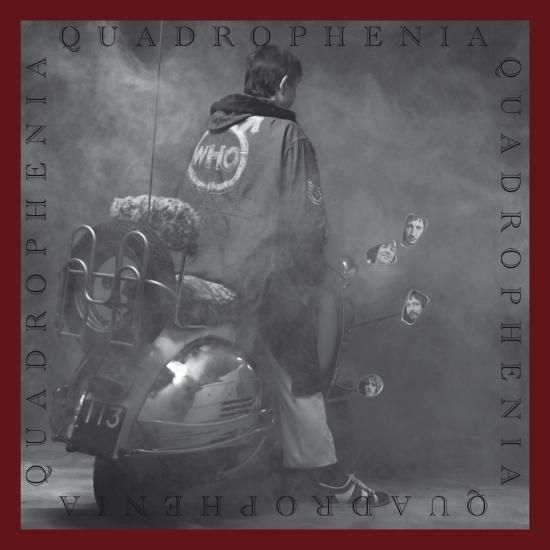 In 1973 The Who released ‘Quadrophenia’, an album with superior songwriting and a stronger story. It was based on Pete Townshend’s own experience of growing up as an angry mod in the early Sixties. The album centres on the character Jimmy, an angry, discontented young man. It deals with adolescent coming of age issues as the protagonist fails to ‘fit in’ and is dependent on pills. Jimmy is a composite of four different personalities in The Who.
„Quadrophenia“ is very much Pete Townshend’s masterpiece, in fact he has described as being the best album that he has ever written. It features more of his vocals than any other album by The Who. This is not to say that the others don’t excel; on the contrary, Keith Moon as always, plays like there’s no tomorrow. John Entwhistle’s bass playing is fantastic and his brass arrangements fit in really well, and of course Daltrey’s voice is superb, especially on ‘The Dirty Jobs’. Convesely, when the album was being produced Roger Daltrey said that his vocals were too low in the mix. In this latest reissue, when he sings the “Out of my brain” chorus over Keith Moon’s fantastic rolls around the drum kit and John Entwhistle’s driving bass in ‘5.15’, Daltrey delivers with sheer power.
'...it abides as one of The Who's peaks because...its instant, push-button atmosphere is always lifted from the realms of ham by some heartfelt Daltrey shout'n'croon, a bit of comedy Moon...and the anthemic elegance of the last two tracks...' (Q-Magazine)
Roger Daltrey, lead vocals, percussion
Pete Townshend, guitars, backing vocals, synthesizers, piano, violin, banjo, percussion, sound effects
John Entwistle, bass, horns, backing vocals
Keith Moon, drums, percussion
Additional musicians:
Jon Curle, newsreader voice
Chris Stainton, piano (on 'The Dirty Jobs', '5:15', and 'Drowned“)
Recorded from May 1972 and June–August 1973, Olympic Studios, London, Ramport Studios in Battersea, London with Ronnie Lane's Mobile Studio
Produced by The Who, Kit Lambert
Co-produced by Glyn Johns (on 'Is It in My Head?' and 'Love Reign o'er Me')
Digitally remastered