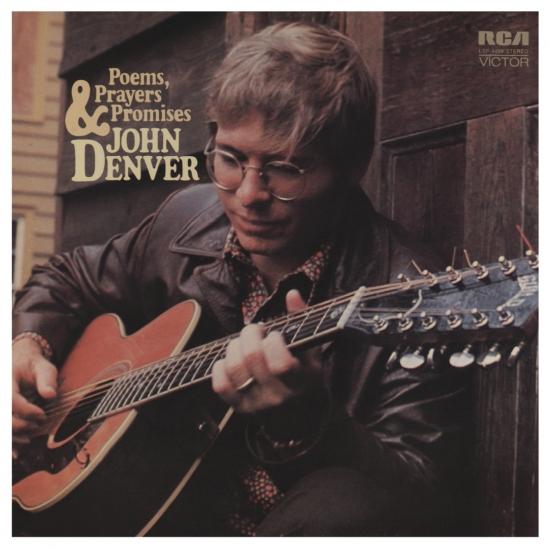 John Denver's breakthrough album, 1971's „Poems, Prayers and Promises“, is also one of his best. In addition to containing two of Denver's strongest and best-known compositions, "Take Me Home, Country Roads" and "Sunshine on My Shoulders," „Poems, Prayers and Promises“ epitomizes the straightforward folk of the artist's early recordings, without the country and pop influences that would find their way into his later '70s work Poems, Prayers & Promises album for sale. The disc has a close, intimate feel, with Denver's softly finger-picked guitar and clear, plaintive tenor front and center throughout.
The reflective lyrics and pensive mood of the title track sets the tone for the rest of the record. Though Denver includes a few covers, the Beatles' "Let It Be" and James Taylor's "Fire and Rain" among them, he is at his best with own tunes, like the wistful "I Guess He'd Rather Be in Colorado," or the unabashedly romantic and tender "My Sweet Lady." Denver's ability to express simple, sincere sentiments is in top form on this recording, making it one of his most directly affecting efforts.
"...a very solid good-timey singer who is at least talented enough to be forgiven for a few of his trespasses..." (Rolling Stone)
„After several albums in which he had allowed cover versions to dominate the sets, John Denver returned with an album, Poems, Prayers & Promises, in which he had written over half the songs. He should have had more confidence in his own songs, for this was at the beginning of a golden period for Denver when his songs would dominate the easy listening airwaves, especially his big hit singles. "Take Me Home Country Roads" and his first U.S. number one, "Sunshine on My Shoulders," both surprisingly failed to reach the charts at all in the U.K.; however, the opening title track set the scene for the whole album, pleasant acoustic songs sung by Denver backed in most cases by the picking and strumming of his acoustic guitar. So it was rather surprising that the album ended with the track "The Box," a spoken poem with no music at all, relating a story similar to Pandora, of a box that was chained and locked and labeled "Kindly do not touch, it's war." When someone did break it open, a bouncy ball -- a metaphor for war -- escaped and ran amok, bumping into everything, particularly the children. And no one had the wisdom to put the ball back into the box and reseal it. Sounds as if it would be awful, but really it was quite moving. Poems, Prayers & Promises was actually released in 1971 but was reissued after Rocky Mountain High nearly reached the Top Ten in 1973, and it became his second Top 20 album. Of the covers, there were two from the Beatles: "Let It Be," an even simpler version than the original, and the rather less famous "Junk" from Paul McCartney's debut solo album. He also covered the James Taylor classic "Fire and Rain," which was rather unnecessary -- for it was rather insipid compared to the version the public had become familiar with less than a year previously.“ (Sharon Mawer, AMG)
John Denver, 6 & 12-string acoustic guitars, vocals
Eric Weissberg, banjo, steel guitars
Mike Taylor, acoustic guitar
Richard Kniss, double bass
Taffy Nivert, vocals (as "Fat City")
Bill Danoff, vocals, guitar (as "Fat City")
Frank Owens, piano
Gary Chester, drums, percussion
Recorded 1970-1971 at RCA Studios A and B, New York City
Engineered by Ray Hall
Produced by Milton Okun, Susan Ruskin
Digitally remastered