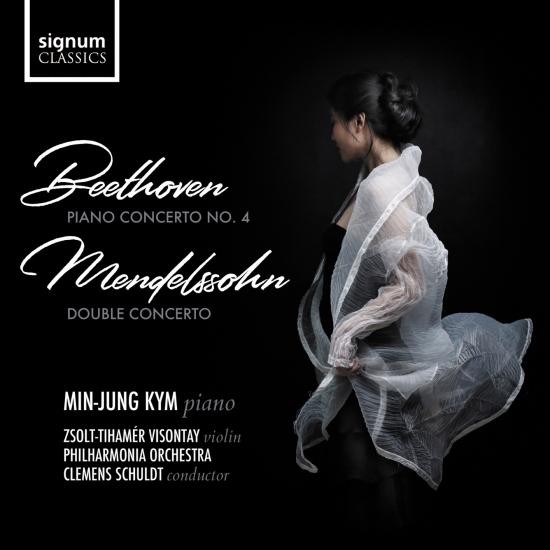 Pianist Min-Jung Kym makes her recording debut on Signum Records, leading the Philharmonia Orchestra under conductor Clemens Schuldt in performances of Beethoven’s Piano Concerto No. 4, and alongside Zsolt-Tihamer Visontay for Mendelssohn’s Double Concerto for Violin, Piano and String Orchestra in D Minor.
Steinway Artist Min-Jung Kym has acquired an internationally recognised reputation performing with some of the world’s leading orchestras and musicians, including collaborations with (amongst others) Barry Wordsworth, Alison Balsom, the Haffner Ensemble, Pierre Amoyal, Leon Bosch, Joy Farrall, Andrew Haveron, Sergey Levitin, Adrian Brendel, Thomas Carroll, Mats Lidstrom and the soprano Susan Bickley. Min-Jung was the ‘pianist of choice’ for the masterclasses of the legendary violinist Ruggiero Ricci.
“Min-Jung is an exceptionally talented pianist, with a wonderfully controlled and even technique, combined with a highly sensitive approach to the music.” Ruggiero Ricci.
Min-Jung Kym, piano
Zsolt-Tihamér Visontay, violin
Philharmonia Orchestra
Clemens Schuldt, conductor 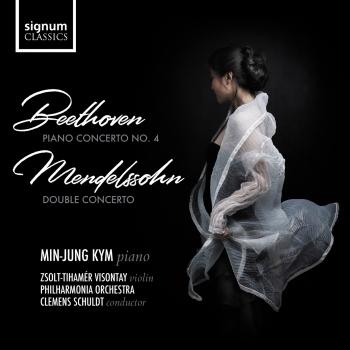 Beethoven: Piano Concertos No. 4 - Mendelssohn: Concerto for Violin and Piano 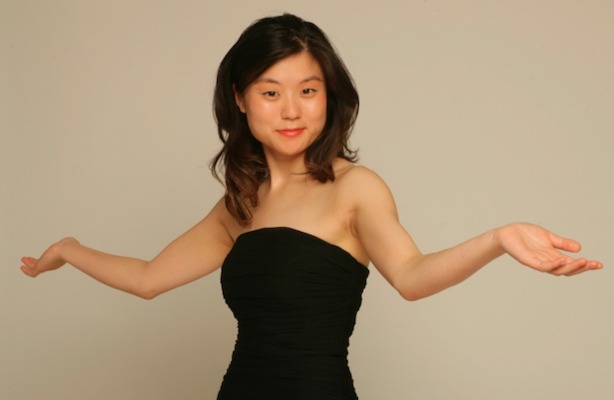 Min-Jung Kym
is establishing herself as an artist bringing fresh quality and musicianship to her performances. She performs internationally collaborating with leading orchestras and musicians including (amongst others) Barry Wordsworth, Nicholas Collon, Pierre Amoyal, Alison Balsom, Nicholas Daniel and the Haffner Ensemble, Mark van der Wiel, Mats Lidstrom, Leon Bosch, Joy Farrall, Andrew Haveron, Thomas Carroll, Sergey Levitin, Adrian Brendel and the sopranos Ailyn Perez and Susan Bickley. Min-Jung was the ‘pianist of choice’ of the legendary violinist Ruggiero Ricci with whom she collaborated between 2002 and 2005.
Min-Jung has appeared at many leading venues including the Barbican Centre, Wigmore Hall, Cadogan Hall, Royal Festival Hall, Queen Elizabeth Hall, Purcell Room, St. John Smith's Square, De Montfort Hall, Brighton Dome, the Queen's Theatre, Abbaye de Fontfroide, the Schleswig Holstein Musik Festival, the Heifetz Society in Los Angeles, Cheltenham Festival, Holders Festival (Barbados), Broadwood International Festival, Albeniz Festival (Comprodon, Spain), as well as the Chichester Festivities. Other venues include performances at the Emilie Bustani Hall in Al Bustan, Lebanon, the Salerno Opera House (Italy), the Auditorio Alfredo Kraus in Gran Canaria, Palais de Chaillot, Salle Gaveau and UNESCO in Paris, The Princess Galyani Concert Hall in Thailand and the National Museum of Korea in Seoul, South Korea..
In 2008, Min-Jung was invited to perform with the world renowned Philharmonia Orchestra, which was received with such acclaim that she was invited immediately to perform with them again the following season.
A former Purcell School scholar, Min-Jung made her London solo concert debut at the age of twelve at the Royal Festival Hall. She went on to study as a scholar at the Royal Academy of Music, graduating with the Eric Brough and Elsie Horne prizes. Her professors have included Maria Curcio-Diamon, Schnabel’s protegee, and Petras Geniusas. Min-Jung took regular classes over the years with Lev Naumov who hailed from the famous Heinrich Neuhaus School and was hailed the “Godfather of Russian piano school”. In 2004 Min-Jung was honoured with the Freedom of the City of London and elected a Liveryman of the Worshipful Company of Musicians. Further recognition was given when Min-Jung was awarded the Associate of the Royal Academy of Music (ARAM), an honour bestowed to alumni of the Royal Academy of Music, who have distinguished themselves in the music profession and have made significant contribution to it in their particular field.
Min-Jung's performances have led to symbiotic collaborations with internaional designers, notably Zuhair Murad, Schiaparelli, Lie Sang Bong and Gustavo Lins who have all sponsored dresses for her.
Min-Jung is also a dedicated teacher and is regularly invited to give masterclasses in many parts of the world. She is also in demand as a jury member of many piano and chamber music competitions.
Zsolt-Tihamér Visontay
German-Hungarian violinist Zsolt-Tihamér Visontay began playing in 1988, taking lessons at the music school in Magdeburg, and went on to study under Professor Jost Witter at the Schloss Belvedere Music School and the Franz Liszt Music Academy in Weimar.
Laureate of several international solo prizes, including the International Louis Spohr Violin Competition and the International Henry Marteau Violin Competition, Zsolt's solo engagements include performing with a number of German orchestras. In 2005 he became Leader of the European Union Youth Orchestra (EUYO), performing under conductors including Vladimir Ashkenazy, Bernard Haitink and Sir Colin Davis, and a year later he also became Concert Master of the Philharmonic Orchestra in Altenburg-Gera. He has led orchestras such as the Radio Symphony Orchestra Berlin, Hamburg Philharmonic, London Symphony Orchestra, Academy of St Martin in the Fields, Royal Scottish National Orchestra, Orchestra Nacional de Porto, City of Birmingham Symphony Orchestra and Bamberg Symphony Orchestra, touring throughout Europe, Russia, Asia and the US.
In 2007, at the age of 24, he became Joint Concert Master of the Philharmonia Orchestra. Since then his solo engagements with the Orchestra have included performing The Lark Ascending under both David Hill and Sir Andrew Davis. He has recorded the John Jeffreys Violin Concerto with the Philharmonia and Paul Bateman. In addition he has acted as violinist/director with the Philharmonia and the Academy of St Martin in the Fields.
Established as a sought-after chamber musician, he has performed and recorded Bartók's Contrasts with Mark van de Wiel and Yefim Bronfman; and has recently recorded Rachmaninov piano trios with Mats Lidstroem and Vladimir Ashkenazy on Decca.
Collaborating with those artists already mentioned as well as many others including Min-Jung Kym and Jamie Walton, he performs in major venues such as the Mozartsaal, Vienna; Salle Gaveau, Paris; and Wigmore Hall, London.
The Concert Master’s Chair is endowed by Saul and Louise Nathan.