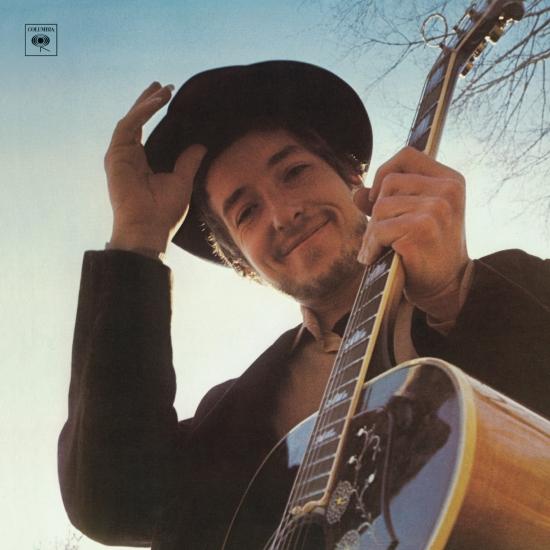 It is hard to recall now how deeply unfashionable country music was in 1969-- Dylan's label, Columbia, dismayed at his apparent retrogression, begged him to remove the word "Nashville" from the album's title. However, as usual, he proved ahead of the game; his embrace of country ushered in Gram Parsons, the Flying Burrito Brothers, and scores of subsequent artists under the Americana banner. Prescient too was his nod to Johnny Cash, with whom he duets on the gorgeous "Girl From The North Country." Buoyed by an altered, near-crooning vocal style, most of the tracks are pleasant and enduring; the chart hit "Lay Lady Lay" remains one of Dylan's most engaging songs Nashville Skyline songs.
"...continues Dylan's rediscovered romance with rural music....a jewel of construction....Nashville Skyline achieves the artistically impossible: a deep, human, and interesting statement about being happy..." (Rolling Stone)
"John Wesley Harding suggested country with its textures and structures, but Nashville Skyline was a full-fledged country album, complete with steel guitars and brief, direct songs. It's a warm, friendly album, particularly since Bob Dylan is singing in a previously unheard gentle croon -- the sound of his voice is so different it may be disarming upon first listen, but it suits the songs. While there are a handful of lightweight numbers on the record, at its core are several excellent songs -- "Lay Lady Lay," "To Be Alone With You," "I Threw It All Away," "Tonight I'll Be Staying Here With You," as well as a duet with Johnny Cash on "Girl From the North Country" -- that have become country-rock standards. And there's no discounting that Nashville Skyline, arriving in the spring of 1969, established country-rock as a vital force in pop music, as well as a commercially viable genre." (Stephen Thomas Erlewine, AMG)
Bob Dylan, guitar, harmonica, keyboards, vocals
Norman Blake, guitar, Dobro
Kenneth A. Buttrey, drums
Johnny Cash, vocals (on "Girl from North Country")
Fred Carter, Jr., guitar
Charlie Daniels, bass, guitar
Pete Drake, pedal steel guitar
Marshall Grant, bass on ("Girl from North Country")
W. S. Holland, drums on ("Girl from North Country")
Charlie McCoy, guitar, harmonica
Bob Wilson, organ, piano
Bob Wootton, electric guitar (on "Girl from North Country")
Produced by Bob Johnston
Digitally remastered
Please Note: the source files come from an extracted SACD.