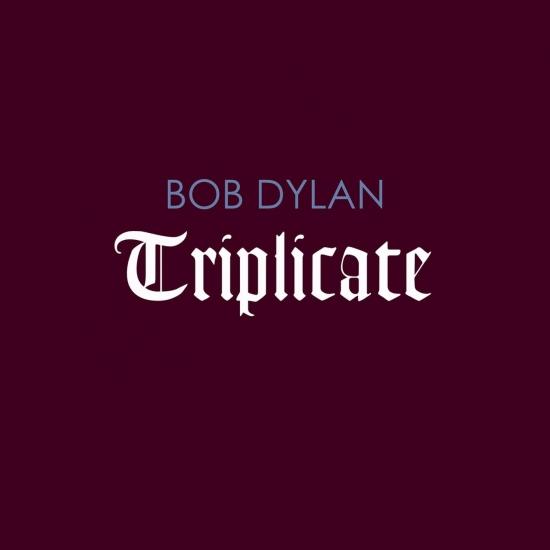 Triplicate, is the new three studio album-set from Bob Dylan. The collection features 30 brand-new recordings of classic American tunes and marking the first triple-length set of the artist's illustrious career. With each disc individually titled and presented in a thematically-arranged 10-song sequence, Triplicate showcases Dylan's unique and much-lauded talents as a vocalist, arranger and bandleader on 30 compositions by some of music's most lauded and influential songwriters. The Jack Frost-produced album is the 38th studio set from Bob Dylan and marks the first new music from the artist since Fallen Angels, which was released in early 2016.
For Triplicate, Dylan assembled his touring band in Hollywood's Capitol studios to record hand-chosen songs from an array of American songwriters such as Charles Strouse and Lee Adams ("Once Upon A Time"), Harold Arlen and Ted Koehler ("Stormy Weather"), Harold Hupfield ("As Time Goes By") and Cy Coleman and Carolyn Leigh ("The Best Is Yet To Come"). The titles of the individual discs are 'Til The Sun Goes Down, Devil Dolls and Comin' Home Late. According to Bob Dylan, "I am finding these great songs to be a tremendous source of inspiration that has led me to one of my most satisfying periods in the studio. I've hit upon new ways to uncover and interpret these songs that are right in line with the best recordings of my own songs, and my band and I really seemed to hit our stride on every level with Triplicate."
Dylan's two previous album of classic American songs, 2016's Fallen Angels and 2015's Shadows in the Night, were both worldwide hits and garnered Grammy Award nominations in the category of Best Traditional Pop Vocal Album. Both albums received worldwide critical acclaim, with Randy Lewis writing of Fallen Angels in The Los Angeles Times, "[Dylan] immediately liberates songs from the big band/big orchestra world from which they emerged, and in which they are most frequently revisited…. [He] reaches to the blues at the core of many of these songs. Thus, they elicit the ache of romantic yearning and loss that often gets subsumed by swelling orchestral forces, background choirs or by singers who are more focused on crafting elegant vocals than finding emotional resonance." The Telegraph's Neil McCormick awarded Shadows in the Night five out of five stars and described the work as "spooky, bittersweet, mesmerizingly moving [with] the best singing from Dylan in 25 years." Jon Pareles wrote of that album in the New York Times, "Mr. Dylan presents yet another changed voice…a subdued, sustained tone….Shadows in the Night maintains its singular mood: lovesick, haunted, suspended between an inconsolable present and all the regrets of the past."
Bob Dylan has sold more than 125 million records around the world.
Recorded 2016 at Capitol Studios, Los Angeles
Produced by Jack Frost