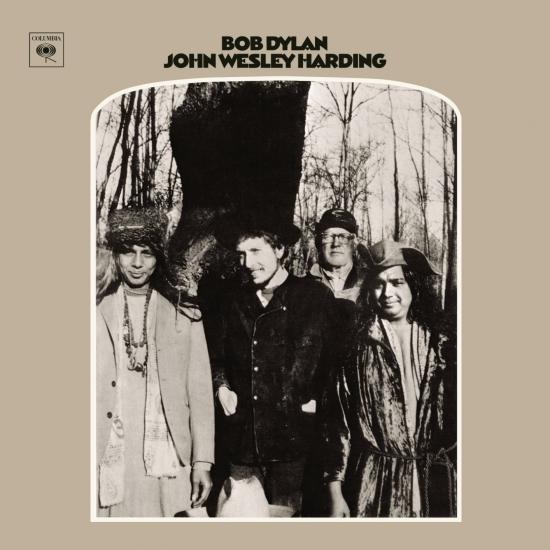 Bob Dylan's eighth album followed a lengthy hibernation due to a motorcycle accident in which the singer re-evaluated his art. He emerged with a set of stark simplicity and heartfelt intensity, melding folk, rock, and country with a mesmerizing power that set off a huge back-to-basics movement in rock that lasted well into the next decade. A biblical purity encompasses the collection as Dylan paints graphic portraits of the disenfranchised--hobo, immigrant, drifter, messenger--articulating the uncertainty of the times. The best-known song here is the apocalyptic "All Along the Watchtower," which would soon be electrically redefined by Jimi Hendrix. The mood lifts on the final track "I'll Be Your Baby Tonight," a beautifully tender love song, suggesting that this is where salvation lies. John Wesley Harding repays repeated play with ever-unfolding metaphor and interpretation, including four hidden Beatles on the cover.
"Even on such a visiona- ry song as "All Along the Watchtower", Dylan sounded mu- ted mysterious. With instrumentation pared down to the essential, this was a record that haunted and in- sinuated, whose force was that of an urgent whisper." (Rolling Stone)
"Bob Dylan returned from exile with John Wesley Harding, a quiet, country-tinged album that split dramatically from his previous three. A calm, reflective album, John Wesley Harding strips away all of the wilder tendencies of Dylan's rock albums -- even the then-unreleased Basement Tapes he made the previous year -- but it isn't a return to his folk roots. If anything, the album is his first serious foray into country, but only a handful of songs, such as "I'll Be Your Baby Tonight," are straight country songs. Instead, John Wesley Harding is informed by the rustic sound of country, as well as many rural myths, with seemingly simple songs like "All Along the Watchtower," "I Dreamed I Saw St. Augustine," and "The Wicked Messenger" revealing several layers of meaning with repeated plays. Although the lyrics are somewhat enigmatic, the music is simple, direct, and melodic, providing a touchstone for the country-rock revolution that swept through rock in the late '60s." (Stephen Thomas Erlewine, AMG)
Bob Dylan, acoustic guitar, harmonica, piano, vocals
Additional musicians:
Kenneth A. Buttrey, drums
Pete Drake, pedal steel guitar (on "Down Along the Cove"; "I'll Be Your Baby Tonight")
Charlie McCoy, bass
Produced by Bob Johnston
Digitally remastered
Please Note: the source files come from an extracted SACD.