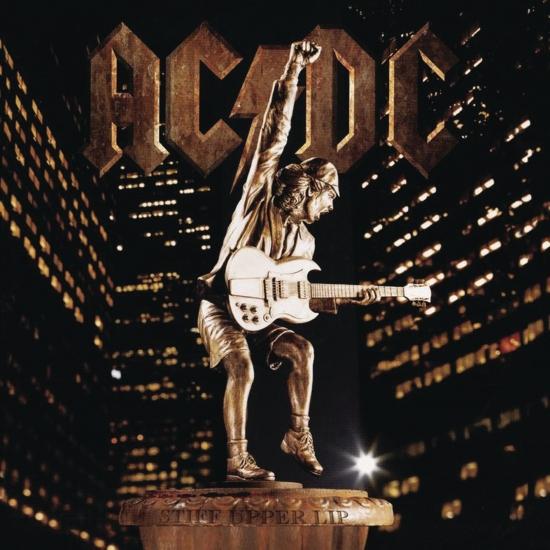 "Stiff Upper Lip" is the 14th studio album by Australian hard rock band AC/DC. It was the band's thirteenth internationally released studio album and the fourteenth to be released in Australia. It was released on February 28, 2000. The album was produced by George Young, older brother of Malcolm and Angus Young and this was the last AC/DC album that George produced before his death in 2017.
"Stiff Upper Lip, AC/DC's 15th studio album, may not reach the heights of Back in Black or Highway to Hell, but it delivers strongly and satisfyingly. It's the record that the highly touted, Rick Rubin-produced Ballbreaker should have been: a simple, addictive, hard album, bursting with bold riffs and bolstered by a crunching, thrillingly visceral sound. Sure, there are absolutely no new ideas, but that's the point. AC/DC know their strengths and they embrace them. And why shouldn't they? Nobody writes a better riff than Malcolm and Angus Young; each song has a riff so catchy, it feels like you've heard it for years. Is there anything earth-shaking? Hardly, but it's largely terrific nonetheless, just because AC/DC are so good at what they do. It's simple music, to be sure, but it's unassumingly musical and, in a way rather smart. If making music like this was really that easy, why can't anybody else do it this well? Some bands are capable of knocking out one record like this -- one, maybe two. AC/DC do it nearly every time out. They've never really stretched, yet that's why they have one of the most reliable catalogs in rock & roll. When you put on one of their records, you know what you're in for, and they always deliver. With Stiff Upper Lip, they're not at classic status, but they're still top-notch. This may not be the first AC/DC record for a collection, but once you're into their scene, it's a fine place to be." ( Stephen Thomas Erlewine, AMG)
Brian Johnson, vocals
Angus Young, lead guitar
Malcolm Young, rhythm guitar, backing vocals, lead guitar on "Can't Stand Still"
Cliff Williams, bass, backing vocals
Phil Rudd, drums
Produced by George Young
Digitally remastered
Please Note: We offer this album in its native sampling rate of 48 kHz, 24-bit. The provided 96 kHz version was up-sampled and offers no audible value!