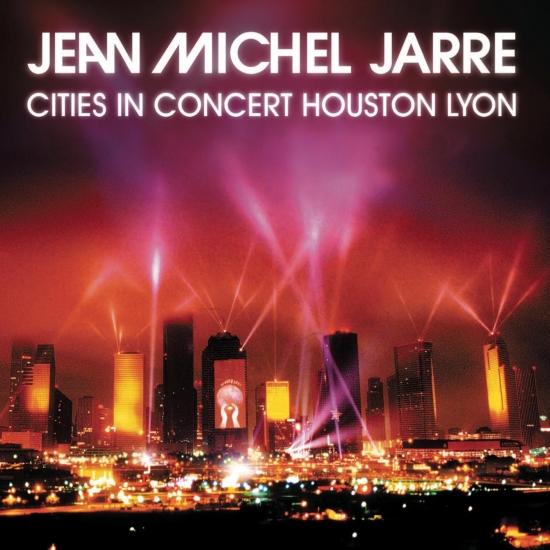 Rendez-Vous Houston:
Jarre's concert in Houston, Texas, April 5 1986, is not only considered a milestone in Jean Michel Jarre career but also as groundbreaking in the field of live concert performance due to its extraordinary scale and Guiness Record breaking live audience attendance of 1.3 million people. The occasion for the concert was the 150th anniversary of the City of Houston and the 25th anniversary of NASA.
Jarre embraced the entire skyline of Houston as the decor of his concert performance creating a truly singular, sonic and visual 'land-art' event, conceived and performed on a unique scale for a one-off experience. The concert took place in the shadow of the tragic deaths of the seven astronauts who had perished along with the Space Shuttle Challenger - it was originally planned that astronaut and saxophonist Ron McNair play live from space with Jarre : that new composition is 'Ron's Piece - Last Rendez-Vous' and was performed on-stage by a friend of McNair's...
Rendez-Vous Lyon:
October 5th, 1986 : Jean Michel Jarre was invited to play by his home town of Lyon, for the City's welcome of His Holiness Pope John Paul II. The concert, which was near the River Saône, was a spectacular show with the singular visual and sound technology now Jarre's unique signature. A choir of not less than 120 people and 60 musicians accompanied him on stage.
The concert attracted more than 800,000 people who gathered on the banks of the river and in the surrounding streets.
In the days leading up to the concert the organizers were very apprenhensive, as an ancient prediction made by Nostradamus forehold that a pope wouls be assassinated in the French city where rivers crossed, indeed the case of Lyon. Jarre defied the Nostradamus' gloomy 'prediction' and the concert was a huge success despite the massive security surrounding the Holy Father.
„En Concert is an energetic live album with half the tracks played in front of Houston, TX, and the other half played to a crowd in Lyon, France. Jarre ignites the crowd in both cities, letting loose on a multitude of synthesizers and sequencers while playing his classics like 'Oxygene V,' 'Magnetic Fields I,' and 'Equinoxe V.' His sonic display in front of the French crowd is the more spirited of the two, since Europe is where his fan base is the largest. Jarre kept many of his slower mood pieces off of this album, which is rightly so. His quicker, more robust pieces seem to gain momentum as he dazzles the audience with his electronic sweeps and sharp stabs of brilliant synth. The lasers and lights can almost be heard piercing the night sky on 'Rendez-Vous II' as Jarre ceases to limit himself to only a few instruments. Both performances are outside, so there are no walls restricting the music, which, believe it or not, can be felt throughout the album. The sounds that radiate from Jarre's keyboards sound large and expansive, capturing the live atmosphere and dynamically unleashing it onto disc.“ (Mike DeGagne, AMG)
Jean Michel Jarre, synthesizers
Claudie Boisselier, violin
Philippe Cauchy, trombone
Guy Delacroix, bass
Marc Desseigne, trombone
Christine Durand, vocals
Sylvain Durand, synthesizer, keyboards
Tony Falcone, mandolin
Michel Geiss, synthesizer
Peter Girard, trombone
Jean Gotthold, trombone
Françoise Guiriec, violin
Joe Hammer, drums
Pascal Lebourg, synthesizer, keyboards
Dino Lumbroso, percussion
Anne Ménier, violin
Joël Nicod, horn
Raymond Patry, trombone
Dominique Perrier, synthesizer, keyboards
Marianne Pollin, violin
Francis Rimbert, synthesizer, keyboards
Anne Rouch, violin
Aloyo Tsuzuraki, violin
Kirk Whalum, alto saxophone
Digitally remastered