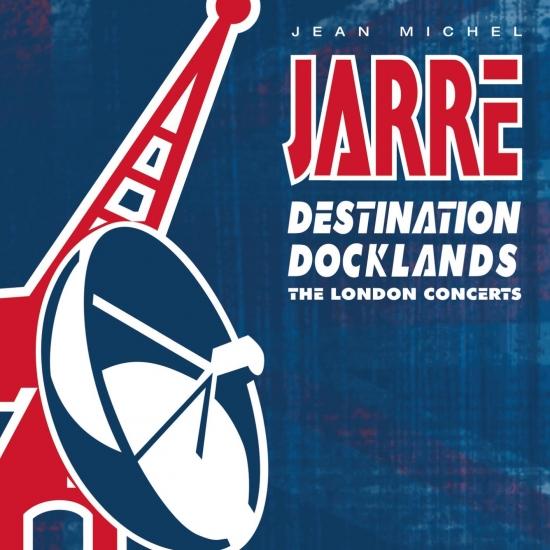 The Docklands concerts (there were two), were held at the London Docks after long negotiations and a great deal of to-ing and fro-ing on the part of the local community authorities. The Docks were to create the setting for a presentation of Jarre’s album, Revolutions, an album clearly inspired by the history of the Docklands. The concerts scheduled for September finally took place in October and the weather turned out to be typically British – rain and strong winds. Despite the weather, the concert tickets sold in record time of a few hours, for a total of 400,000 in total over the two dates.
The stage was built on a 1,000 ton floating barge which lay in the Thames, on which Jarre and his musicians, a choir and an orchestra performed. It was as though this bleak area had been transformed for two evenings into an industrial, futuristic, multimedia theatre, which united Jarre’s electronic music and vision, and the drab landscape of the Docklands in perfect, psychedelic harmony.
Jean-Michel Jarre, synthesizers
Michel Geiss, synthesizers
Dominique Perrier, synthesizers
Francis Rimbert, synthesizers
Guy Delacroix, bass
Jo Hammer, drums
Dino Lumbroso, percussions
Sylvain Durand, synthesizers
Christine Durand, soprano
Hank Marvin, guitar (on London Kid and Fourth Rendez-Vous)
Mireille Pombo, vocals (on September)
Sori Bamba, conductor of Mali Choir (on September)
Kudsi Erguner, turkish flute (on Revolutions)
Bruno Rossignol, choir conductor
Recorded 8.-9. October 1988 at Docklands, London, England
Digitally remastered