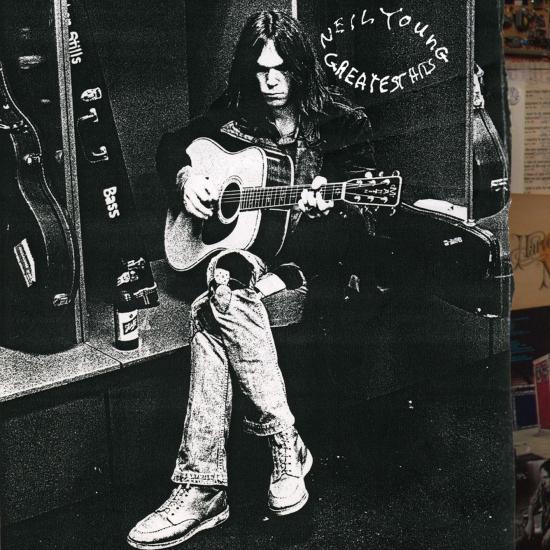 How does one represent the career of one of the most distinctive, powerful singer/songwriters of the 20th century in the space of a single CD? By keeping it simple and sticking to the milestones. That's exactly what „Greatest Hits“ HITS accomplishes, by presenting 16 of Neil Young's most beloved compositions. The gritty, fuzz-guitar fury of Young's work with Crazy Horse ('Cinnamon Girl,' 'Hey Hey, My My [Into the Black]') brushes up against the acoustic-based, country-tinged 'Old Man' and 'Only Love Can Break Your Heart,' as well as haunting, soul-baring ballads such as 'The Needle and the Damage Done.' Few would deny that the 1970s were Young's richest decade, and this collection strongly focuses on those years, skipping most of Young's genre-hopping '80s albums and grandfather-of-grunge '90s recordings, but the gems from those years would make a rewarding sequel to this concise, sterling anthology.
„It may be hard to believe, but 2004's Greatest Hits is not only the first retrospective Neil Young has released since 1977's Decade, it's the first ever single-disc collection of his best-known songs. That's a span of 27 years separating the two collections, which is an awful long time to resist a Greatest Hits disc -- many of his peers succumbed, offering countless comps during those years -- and such a resistance to a compilation may not be much a surprise from the legendarily prickly Young, but what is a surprise is that 11 of the 16 songs on Greatest Hits were also on Decade. Of the five songs that were not on Decade, only two date from after the '70s -- 1989's 'Rockin' in the Free World' and 1992's 'Harvest Moon' -- while one of the remaining three (1970's 'Only Love Can Break Your Heart') comes from the time chronicled on Decade; the other two, 1978's 'Comes a Time' and 1979's 'Hey Hey, My My (Into the Black),' arrived in the two years of the '70s not covered on the 1977 compilation. All this means is that Greatest Hits offers the basic canon, with no frills and none of Neil's trademark idiosyncrasy. Some may miss that cantankerous spirit, pointing out that this contains nothing from his towering twin masterpieces of dark introspection -- Tonight's the Night and On the Beach -- or that there's nothing from Buffalo Springfield (which was covered on Decade) and that noteworthy songs like 'Powderfinger,' 'Cortez the Killer,' 'Lotta Love,' and 'Long May You Run' are missing. Ultimately, that doesn't matter much, because Greatest Hits has all the songs that every Neil Young fan, from the devoted to the casual listener, agrees are his biggest and best: 'Down by the River,' 'Cinnamon Girl,' 'Helpless,' 'After the Gold Rush,' 'Southern Man,' 'Ohio,' 'The Needle and the Damage Done,' 'Old Man,' 'Heart of Gold,' 'Like a Hurricane.' And that's why it works as an all-business introduction for the uninitiated and as a concise summary for those not willing to travel down all the long, winding roads Young has traveled over the years. In other words, it's as good a compilation as it could have been.“
Recorded 1969–1991 at Broken Arrow Ranch, Cow Palace, Quadrafonic Sound Studios, Record Plant Studio 3, Redwood Digital Studios
Engineered by David Briggs, Henry Lewy, Harry Sitam, David Hewitt, David McKinley, Elliot Mazer, Henry Saskowski, John Nowland, Niko Bolas, Tim Mulligan, Bill Halverson
Original master tapes transferred at Redwood Digital, Woodside, CA
Digitally mastered at Redwood Digital
Produced by David Briggs, Neil Young, Crosby, Stills, Nash & Young, Kendall Pacios, Elliot Mazer, Henry Lewy, Tim Mulligan, Ben Keith, Niko Bolas
Digitally remastered