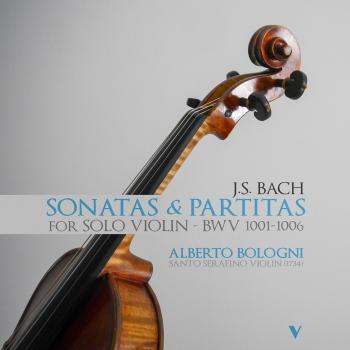 Alberto Bologni
graduated with honors from the Conservatory of Florence “Luigi Cherubini” and proceeded to obtain a soloist diploma at the Conservatory of Rotterdam. He owes his training to the contribution of some of the most celebrated violinists of the European tradition: Sandro Materassi, who was the go between with the Venetian school of Giulio Pasquali; and the German-Hungarian school transmitted by Jeno Hubay; while Stephan Gheorghiu and Ilya Grubert provided him with the teachings of the Russian-Soviet school of Oistrack and Kogan. Passionate about art, cinema and literature, his intellectual curiosity has made him one of the most versatile violinists of his generation. Alberto Bologni confronts a solo and chamber music repertoire that combines the best known rarities and rediscoveries, as well as, a large series of compositions by contemporary authors, often dedicated to him or commissioned by him, regularly performing in major Italian and European centers. Author of the theatrical dialogue “Goldoni and Haydn or the art of conversation”, he also composed the cadences for violin concerts by Mozart, Haydn, Viotti (n.22) and Paganini (n.1). His recordings have been much appreciated by the specialized Italian and English press. He plays a Santo Serafino, 1734, formerly played by Cesare Ferraresi.