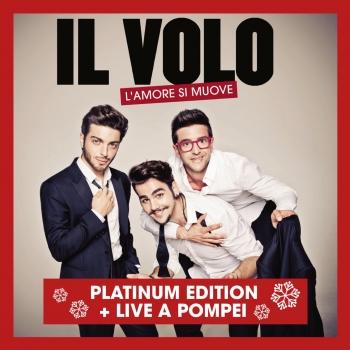 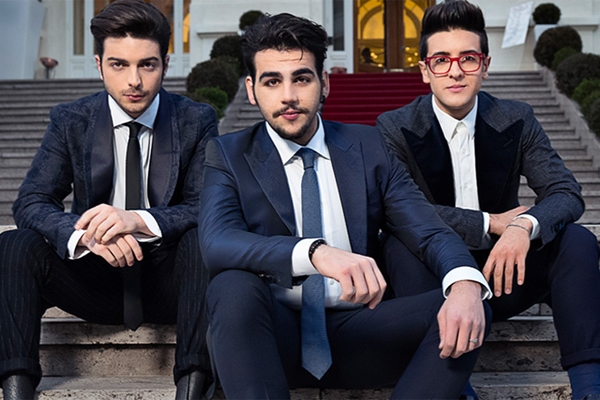 Il Volo
In the past few years alone, IL VOLO has performed all over the world, released massively-selling albums, joined legendary songstress Barbra Streisand on tour, and taken the stage for three highly acclaimed PBS specials. Now, the powerhouse trio comes back to the States immediately following their prestigious win at the Sanremo Music Festival in Italy, which led them to go 3x Platinum in Italy with their latest EP and contributed to their sold-out summer tour. The award-winning Italian pop opera group, discovered by renowned manager Michele Torpedine (Andrea Bocelli), features Piero Barone, Ignazio Boschetto and Gianluca Ginoble. The group brings American audiences their best live performances of pop and traditional songs backed by symphony orchestras – in English, Italian and Spanish.
IL VOLO is set to release their 3rd studio album, Grande Amore, in September 2015 via Sony Music. Producers for their upcoming album include Michele Torpedine, Celso Valli, Cheche Alara and Emilio Estefan. Following the release of their album, IL VOLO will embark on a 35 date tour spanning the country. Kicking off in Buffalo, New York on February 5, 2016, shows will continue through April with additional dates in Miami, Los Angeles, Chicago and many more.
After captivating Ti Lascio Una Canzone viewers with their cover of the Neapolitan ‘O Sole Mio, IL VOLO instantly stepped into the international spotlight. Quickly landing a worldwide recording deal with Interscope Records/ Universal Music Group – becoming the first Italian artists to sign with a U.S. label – IL VOLO set to work on their debut album in Los Angeles, Rome, and London (where they recorded at the famous Abbey Road Studios).
In November 2010 IL VOLO released their self-titled debut in Italy, where it was ultimately certified platinum. Upon its worldwide release in April 2011, this inspired collection of standards, opera selections and soulful ballads debuted at number 10 on the Billboard Top 200 chart and eventually climbed to the number 6 slot. IL VOLO then garnered the attention of Quincy Jones, who asked the trio to join superstars like Celine Dion and Josh Groban on the charity single “We Are The World: 25 for Haiti”. In 2011, the group was nominated to the Latin GRAMMY®in two categories: ‘Best New Artist’ and ‘Best Pop Album by a Duo or Group’
Released in November 2012 – just as IL VOLO were wrapping up their tour with Barbra Streisand – the group’s second studio album We Are Love pushed further into pop territory while sustaining the classic sensibility at the heart of their sound. Backed by gorgeously elegant orchestration from the Czech Symphony, IL VOLO put their interpretive talents to work on selections as brilliantly varied and also features guest appearances by the great Placido Domingo (on “Il Canto,” a song dedicated to heavyweight IL VOLO influence Luciano Pavarotti) and Italian singer-songwriter Eros Ramazzotti (on the tender piano ballad “Cosi”).
Following the release of We Are Love, IL VOLO released two additional albums: Il Volo’s We Are Love: Life from the Filmore Miami Beach at Jackie Gleason Theater and Buon Natale: The Christmas Album, which hit iTunes’ Top 10 album of the season. We must not forget to mention also the successful tours IL VOLO did in the United States and Latin America in 2013 with 50 dates in the most important and prestigious cities and venues of the Americas. 2013 ended with the participation in the Concert of Assisi, a concert of Sacred/Christmas songs accompanied by the symphony orchestra in the frame of one of the most beautiful churches in the world, including Giotto’s frescoes. This concert has been filmed and broadcast by the main Italian TV Network during the day of Christmas, after the Mass of the Pope. IL VOLO also took part as Special Guest to Laura Pausini’s concert in New York, at the Theatre at Madison Square Garden held to celebrate her 20-year career, among the other guests like Gloria Estefan, Ivette Sangalo e Miguel Bosé.
Since 2011, IL VOLO has embarked on several tours in Europe, North and South America. Not only showcasing their immense vocal gifts and awe-inspiring showmanship on record and on tour, IL VOLO have also graced the stages of major TV shows (including The Tonight Show, The Today Show, Good Morning America, The Talk, American Idol, The Ellen DeGeneres Show, The Rachael Ray Show and the 2013 Daytime Emmy Awards), turned up on the final episode of HBO’s Entourage, and has had three PBS specials including Il Volo Takes Flight in 2012, Il Volo Buon Natale in 2013 and most recently Il Volo: Live from Pompeii in 2015. The magnificent legendary ruins of Pompeii, the city destroyed by Mt. Vesuvius millennia ago served as the backdrop of the concert that marked the first time since 1971 that an artist (the last one was Pink Floyd) had performed at this famous site located near present-day Naples. The exclusive concert was recorded and will be released as a DVD.
In 2014, the powerhouse Italian pop opera trio came back to the States immediately following their first Billboard Latin Music Award win in 2014 for Latin Pop Album – Artist of the Year, Duo or Group, which the group previously received a nomination for in 2013 to embark on their 2014 U.S 15-city summer tour.
IL VOLO’S current single “Grande Amore” is available from all major digital-music and download sites. The Italian version of the single performed at the Eurovision Song Contest 2015, was one of the most outstanding performances winning the popular vote. Without a doubt, 2015 and 2016 is going to be another great year for IL VOLO.