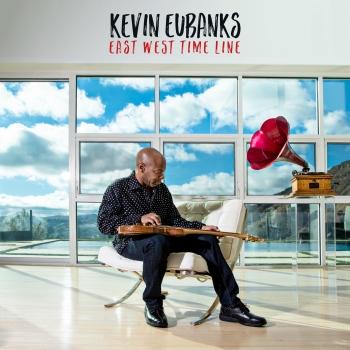 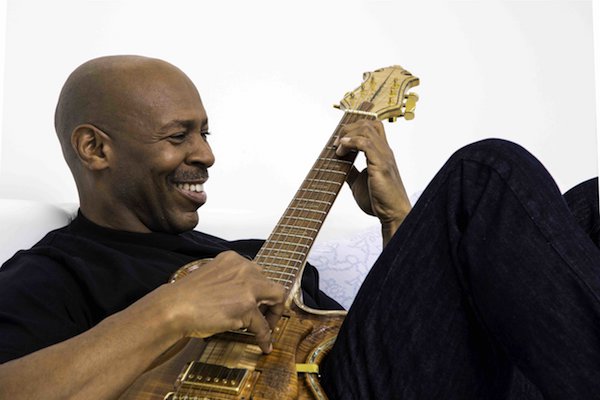 Kevin Eubanks
guitarist and prolific composer. He is well known by many as the former Music Director of The Tonight Show band, appearing on the show 18 years (1992 - 2010). His laid back style and affability seems to belie the concentration and focus that have made him successful both as a consummate musician and a household name for late-night TV viewers.
Kevin was born into a musical household in Philadelphia, PA. His mother, Vera Eubanks, is a gospel and classical pianist and organist with a Masters Degree in music education. She has taught both privately and in the school system, until her recent retirement. Vera’s brother, the late Ray Bryant, was a journeyman jazz pianist who recorded and toured with jazz greats such as Miles Davis, Sonny Rollins, John Coltrane, and Sarah Vaughan not to mention a hit records of his own. Kevin was thus exposed to world-class music in his formative years as he began violin lessons, his first instrument, at age seven. His brother Robin, is a trombonist, arranger and tenured professor at Oberlin College and brother Duane is consistently influencing so many younger musicians as a trumpet teacher and continues to expand his recording career. Kevin also studied the trumpet before making his commitment to the guitar which was solidified with his entrance to the world renowned Berklee College of Music in Boston from which he has received an ‘Honorary Doctorate’ degree. He has also received an ‘Honorary Doctorate’ degree from Redlands University in California.
Kevin moved to New York after attending Berklee College of Music where his career kicked off in earnest. He started playing with some of the greats of Jazz, including Art Blakey, Slide Hampton, McCoy Tyner, Sam Rivers, Roy Haynes, Dave Holland, Ron Carter and others. In addition to working in other bands, Kevin become the leader of his own group and traveled to Jordan, Pakistan, India and Kuwait on tours sponsored by the US State Department, not to mention the European/Japanese Jazz circuit which so many artists frequent.
His first album as a leader, Guitarist, was released on the Elektra label when Kevin was 25. It documented a sophisticated, nuanced voice on the instrument, and was graced by the presence of some peers who are still performing with him today: tenor saxophonist Ralph Moore,(Tonight Show Band member) and his brother Robin. Kevin’s cousins, the late bassist David Eubanks and the pianist Charles Eubanks, also appeared on the recording, which was so well received that it lead to a seven record recording contract with the GRP label, owend by Dave Grusin and the late Larry Rosen. Those recordings, based largely upon Kevin’s compositions, gained him a wide audience through extensive radio airplay and touring. It showed the range of his skill on both acoustic and electric guitar. Kevin become a full-time bandleader, and traveled the world with his group.
In 1992, Kevin moved to the West Coast to join The Tonight Show Band featuring Jay Leno. In 1995, Kevin was asked the lead the band. His versatility and open minded approach enabled him to write and choose music that satisfied the huge and varied audience for the show. He assumed the role as Leno’s sidekick, sometimes participating in skits, and his engaging personality as well as his musicianship drew attention. The position afforded Kevin the opportunity to work with great and popular musicians from all genres. As a result of living close to LA, Kevin has become involved in writing scores for both TV movies and full-length independent feature films. He loves to do volunteer work for charities and maintains an active relationship with the organization dearest to his heart, The Children’s Hospital of Los Angeles. He has appeared on various TV shows from Hollywood Squares to VIP to Girlfriends, Days of Our Lives, Royal Pains, HGTV, Oprah’s OWN, The History Channel, to name a few. But his passion is clearly seen when he is on stage performing as he continues to embrace his true passion, the love of music.
A strong advocate for music education, Kevin served as the Artistic Director of the Jazz In The Classroom Program for The Thelonious Monk Institute of Jazz from 2010 - 2012, where he worked with young up-and-coming middle and high school musicians in the Los Angeles public schools. “Young people need to be able to express themselves in ways that educate, uplift, and inspire self-confidence,” Eubanks remarked. “It’s important that everyone in the neighborhood gets to see that.” He also hosted the 2013 NEA Foundation Gala. He has taught at the Louis Armstrong Jazz Camp, the Banff School of Fine Arts in Canada, Rutgers University, and at the Charlie Parker School in Perugia, Italy as well as hosting master classes at many colleges and universities.
In November, 2010, Kevin released the CD Zen Food (Mack Avenue Records) that debuted in the Top Five on the Billboard Jazz Chart and was Kevin’s fastest selling record ever. In February, 2013 his CD The Messenger (Mack Avenue Records) was released, garnering a 2014 NAACP Image Award nomination for “Outstanding Jazz Album.” That same year, he toured extensively as a member of Dave Holland’s PRISM. In March 2015, the acclaimed Duets (Mack Avenue Records), with fellow guitarist Stanley Jordan, was released to rave reviews and concert performances. His next project, the highly-anticipated upcoming CD East West Time Line is set for release on April 7, 2017 (Mack Avenue Records).