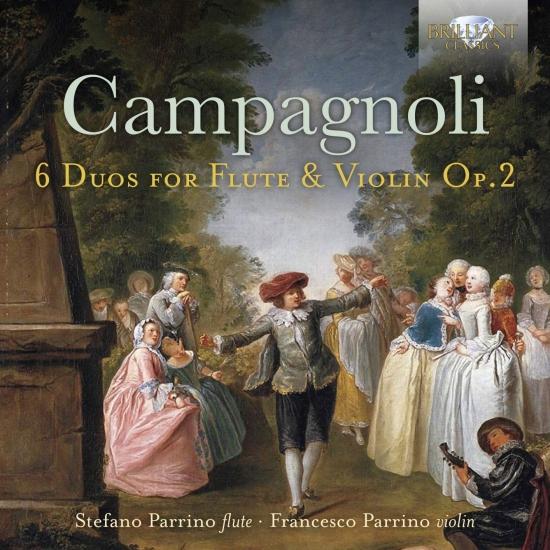 Two previous albums on Brilliant Classics have introduced audiences to the music of Bartolomeo Campagnoli (1751-1827), an early-Classical violinist and composer whose music had until recently been almost entirely lost to history. And yet these recordings of string quartets (BC95037) and flute quartets (BC95399) have shown how charming, unaffected, original and enjoyable is Campagnoli’s voice, at least in performances sympathetic to the performing style of his time. The quartets album was awarded five stars and nominated for Album of the Month by CdClassico.com: ‘Required listening’.
The duos on this new recording are two- or three-movement sonatas in all but name. Some of them have been recorded before, but Stefano and Francesco Parrino present here the only available complete recording. The works illustrate how Campagnoli could write of his own music as combining ‘German erudition and Italian soul’, and without false modesty. Spohr heard him play in 1804 and described his style as elegant and fluid but somewhat old-fashioned, which fits Campagnoli’s duos too. He wrote them between 1780 and 1796 while in the employ of Charles of Saxony, Duke of Courland, in Dresden, and they are expertly calibrated to appeal to aristocratic tastes for pleasant and lively music in the galant style, always falling easily upon the ear.
As well as performing and recording in duet for many years, the Parrino brothers have been members of orchestras across Italy and beyond. As one half of the Quartet DuePiùDue they recorded the Flute Quartets of Cambini for Brilliant Classics (BC95081), ‘a close-knit and well balanced ensemble,’ according to the Critica Classica website, ‘producing excellent interpretations which should delight a wider public without courting banality.’
Bartolomeo Campagnoli (1751-1827) learned his trade with famous Italian musicians Tartini and Nardini. As a virtuoso on the violin he traveled Europe, where he held several important posts in Freising (Bavaria), Dresden and Stockholm, before settling as Kapellmeister of the famous Gewandhausorchester in Leipzig.
Campagnoli claimed for himself “the German learnedness with Italian soul”, and his duos for the attractive combination of flute and violin abound in lyrical melodies set into the firm musical structures of the first Viennese School.
Lovingly and brilliantly played by Francesco and Stefano Parrino, who already successfully collaborated in the recording of chamber music by Leo Ornstein, which received excellent reviews in the international press.
Stefano Parrino, flute
Francesco Parrino, piano 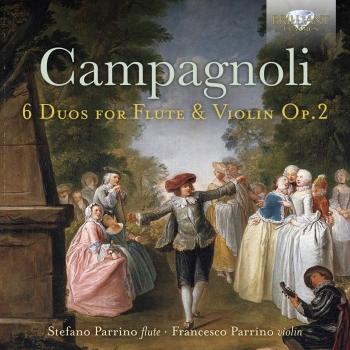 Stefano Parrino
was born in Bormio in Italy. He was awarded a diploma with honours at the "G. Verdi" Conservatory of Milan and continued his studies at the Conservatoire Superieure at Geneva where he studied with Maxence Larrieu and won the ‘Prix de Virtuosite’. At the Ecole National de Musique in Paris, Parrino studied with Patrick Gallois and followed the performance and virtuosity diplomas for which he gained the ‘premier prix all’ unanimite’ and "le premier prix avec excellence".
In London, he obtained the postgraduate Diploma of Advanced Studies at the Royal Academy of Music in the class of William Bennett, Sebastian Bell, Kate Hill, and Keith Brag. Then in Biella in Italy, Parrino studied with Peter-Lukas Graf at the Accademia Internazionale "L. Perosi" where he won the "Eccellenza con Menzione Speciale". In 2001 he took the Soloist diploma in the “Lugano Conservatoire”. He has also played at master classes with Jacques Zoon, Patrick Gallois, Paul Edmund Davies, Michael Cox, Andras Adorjan, Michel Debost, William Bennett, Maxence Larrieu, Susan Milan, Peter-Lukas Graf.
Francesco Parrino
My name is Francesco Parrino and I am an Italian pianist and composer who loves creating musical arrangements only by ear. In everyday life I work as a physiotherapist but music is my greatest passion and I try to dedicate it as much time as possible. I began to play piano at the age of 4. After a few years of classical formal training at the local music school, private lessons and countless hours of practise, I started my musical career with my first amateur album “Night Planet”, which featured 10 original compositions. I opened my official Youtube channel in June 2011.
Since you problably arrived here from my Youtube Channel, you already know that I like to upload a variety of piano adaptations from radio and movie soundtracks. You will also find few of my own compositions. I enjoy listening to all kinds of music and then creating a new arrangement in my own style. On this website, you probably guessed it, you can find a list and links to all my available scores! Please keep in mind that my sheet music is only available on Musicnotes.com!
Not everybody knows that I also play the piano and sing with “Earthist”, a developing band from Italy. Earthist’s debut album “Lightward” was released worldwide via Epictronic / Plastic Head Distribution LTD at the beginning of 2015. Another little known fact is that from November 2016 to February 2017, I was a contestant on the 16th Season of the Italian TV / Talent Show “Amici di Maria de Filippi“, in the “Singer” category.
In September 2017, I eventually published my first album “The Covers” on all major online platforms. It features 13 high quality re-recordings of some of my most popular Youtube arrangements. A second album, “The Covers Part 2” has been published in December 2017. “The Covers Part 3” was released in March 2018 and featured newer songs such as Havana, Chandelier and Faded.
On June 2nd, 2018 I moved into a new house and started playing a new piano, a Casio GP300. In October 2018 I also released a new album, “The Covers Part 4, which is available on all platforms including Youtube Music and features some of my most recent hits for the year, such as Mamma Mia.
In 2019 I opened a new channel, Francesco Parrino Extras. It features all my new tutorials, but also bloopers, Q/As, extra videos and other contents that have been requested throughout the years. In March 2019 I also launched my fifth album, “The Covers Part 5” which contains 16 new covers including Dancing Queen and Somebody To Love. In June 2019 I also launched my sixth album “The Covers Part 6“, which features new hits as well as some older ones that never made it to the stores before, such as November Rain and Everglow.