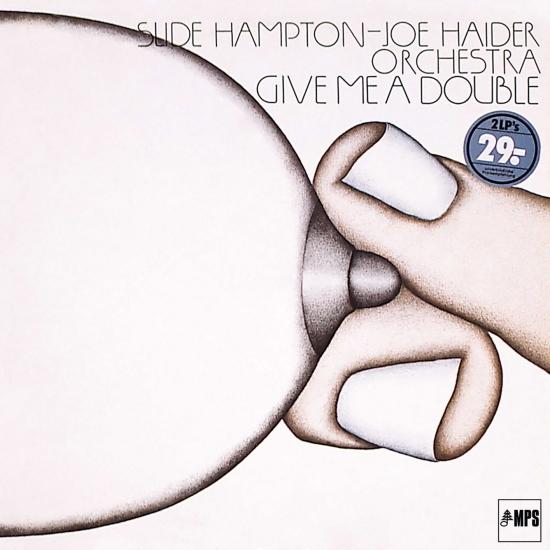 Info zu Give Me a Double Live (Remastered)

With his ever-fresh and expansive musical outlook, Slide Hampton is the personification of the composer-arranger-instrumentalist in jazz. His composing and arranging prowess have long been sought by all manner of ensembles, from small groups to orchestras, student ensembles to professional bands. His superb trombone playing once elicited an ultimate seal of approval from the father of the modern jazz trombone and Hampton mentor, J.J. Johnson. From a backstage vantage point at a Kennedy Center performance, Johnson was overheard referring to a solo Slide performed as part of a tribute to Dizzy Gillespie as "?one of the most articulate ever given on a trombone."
Growing up musically in Indianapolis, Slide was recruited for the family band by his father's order that he must fill the vacant trombone chair. So as fate would have it, and music lovers would later decree it, though initially indifferent towards the instrument, Slide Hampton became a trombone master. Luckily, besides the obvious familial influence, Slide Hampton came up at a time when Indianapolis was prosperous with budding jazz musicians who would go on to greatness; these included Johnson, Wes Montgomery, and such peers as Freddie Hubbard and David Baker.
By the time he reached 20, young Slide was prepared to pursue a career in music. Among his stellar affiliations were the bands of Dizzy Gillespie, Art Blakey, Barry Harris and Max Roach. On the big band side, where he also began earning his stripes as arranger and composer, was work with Maynard Ferguson and the Thad Jones/Mel Lewis Orchestra. One of Slide's earliest bands, the Slide Hampton Octet, was obviously designed to further hone his writing. Although the band featured such stellar soloists as Hubbard, Booker Little, and George Coleman, a band of that size obviously afforded the young Hampton a good canvas on which to paint his compositions and arrangements. From there he spent much of the '60s as musical director for several bands and artists.
More big band work followed, including a European tour with Woody Herman that led to work in radio and television, as well as performances with some of the many expatriate jazz musicians then residing on the continent, including Benny Bailey, Kenny Clark, Kenny Drew, Art Farmer, and Dexter Gordon. He returned stateside towards the end of the 1970s, soon forming a pioneering trombone choir with rhythm section band called Slide Hampton and His World of Trombones. Since that time he has served as composer and arranger in residence with various ensembles, and as sought after clinician at education institutions. His long-standing relationship with Dizzy Gillespie culminated in his serving as co-music director with fellow 2005 Jazz Master Paquito D'Rivera of Dizzy Gillespie's Diamond Jubilee.
Ferdinand Povel, alto saxophone, flute
Isla Eckinger, bass
Billy Brooks, drums
Joe Haider, piano
Dexter Gordon, tenor saxophone
Andy Scherrer, tenor saxophone, soprano saxophone
Bob Burgess, trombone
Slide Hampton, trombone
Ack Van Rooyen, trumpet, flugelhorn
Benny Bailey, trumpet, flugelhorn
Idrees Sulieman, trumpet, flugelhorn
Eric Van Lier, tuba, bass trombone
Recorded live January 16-18, 1974 in the Domicile, Munich
Recorded by Jürgen Koppers
Produced by Joe Haider
Digitally remastered