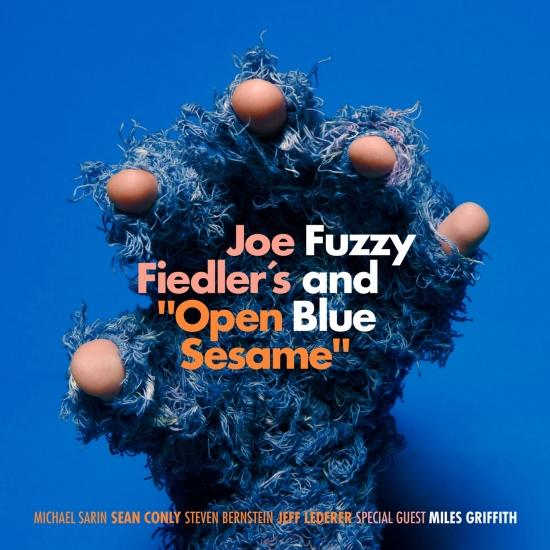 In 2019 trombonist Joe Fiedler released Open Sesame, packed with inventive jazz readings of material drawn from his longstanding “day job” as an EMMY-nominated music director and staff arranger for the famed children’s show Sesame Street. The effort was equally beloved by lay listeners and the jazz world alike. DownBeat praised the music’s “diverse aesthetic,” in which Fiedler blends “elements of funk, rock, free-jazz and New Orleans polyphony into a potent mix that gives depth and texture to the lighthearted compositions.” When Fiedler and the band toured the music, including a stop at Dizzy’s Club Coca-Cola with guest luminaries Wynton Marsalis and none other than Elmo himself, the realization set in that the project would be no one-off. “I have these songbooks from the Sesame Street office,” Fiedler says, “and if you whip through the first 30 tunes, absolutely everyone knows them. But there are six or seven thousand songs they’ve done over the past 50 years, with plenty of gold in there to do a second album for sure.”
Fuzzy and Blue, Fiedler’s second volume of Sesame Street songs, shines still more light on the extraordinary wit and melodic gift of the foundational Sesame Street composers Joe Raposo and Jeffrey Moss, among others. The album boasts the same top-tier lineup as Open Sesame, with a couple of twists. Trumpeter Steven Bernstein, who played on only part of Open Sesame, now becomes an integral cog in a nimble three-horn section, expanding and varying the palette and allowing Fiedler to bring his seasoned orchestration skills to the foreground. Reedman Jeff Lederer plays tenor and clarinet and relies more heavily on soprano sax this time out, helping achieve the ideal blend of colors and registers that Fiedler was seeking. Drummer Michael Sarin and bassist Sean Conly keep the rhythms locked and creatively churning, from the Dr. John/Professor Longhair vibe of “Fuzzy and Blue” to the reggae feel of “Elmo’s Song” (by Tony Geiss), to the Hugh Masekela-inspired Afropop of “Ladybug’s Picnic” (originally a peppy country novelty by the late William “Bud” Luckey).
The ensemble also gets a visit from vocal powerhouse Miles Griffith, the very model of a guest on Sesame Street. On the “I Love Trash/C Is for Cookie” melange (a one-two shot of Moss and Raposo), Griffith’s singing is unabashed, larger than life, uproariously funny but insightful and firmly in control. He’s equally compelling in a sociopolitical vein on “I Am Somebody,” in which Fiedler combines an original song with the lyrics of Reverend William Holmes Borders — words recited to powerful effect on Sesame Street in 1972 by Reverend Jesse Jackson. Fiedler felt a need on Fuzzy and Blue to acknowledge social tumult at the close of the Trump presidency and the still-tentative aftermath of the COVID pandemic. “We Are All Earthlings,” a gentle and idyllic Jeffrey Moss folk ballad from 1993, accomplishes this as well, though Fiedler brings a stark added tension with his Stravinsky-esque horn voicings.
Together, Bernstein and Fiedler present a veritable master class in the use of mutes for endless color and timbre subtlety, in the spirit of early jazz. “We’re playing these Harmon mutes with the stems in,” Fiedler says, “which nobody does — that’s from the ’20s.” Bernstein plays his signature slide trumpet on Raposo’s “X Marks the Spot” (the only minor-key song) but otherwise is heard on valve trumpet and flugelhorn, not to mention the lower and darker G trumpet on Raposo’s “I Am Blue.” That song opens with beautiful muted trombone and is distinctly Ellingtonian in orchestration, with horns placed outside their more common registers.
Throughout the album there’s an atmosphere of fun, “a sense of burlesque” as Fiedler put it in the Open Sesame liner notes, that flows from the trombonist’s deep love of Ray Anderson, the Jazz Passengers, Carla Bley and other major influences. Steven Bernstein’s Sexmob is another. The improvisational openness and risk of Fiedler’s trio dates Sacred Chrome Orb, The Crab, I’m In and Joe Fiedler Plays the Music of Albert Mangelsdorff also carry over to this more song-oriented endeavor. Fuzzy and Blue, like its predecessor, is Fiedler’s way of bringing it all together, reminding himself and all of us that inspiration can and does come from everywhere, and that everything is connected.
A native of Pittsburgh, Fiedler is an accomplished jazz improviser and bandleader with sideman credits including Andrew Hill, Charles Tolliver, Satoko Fujii, Eddie Palmieri, Celia Cruz and a host of others. In addition to his trio and other small-group lineups, Fielder leads the low-brass quartet Big Sackbut (three trombones & tuba), which has released the albums Big Sackbut, Sackbut Stomp and Live in Graz. He was nominated for an Emmy Award in the category of Outstanding Music Direction and Composition in a Children’s Series in 2013 and 2016. He plays lead trombone on the 2021 movie soundtrack album for Lin-Manuel Miranda’s In the Heights, contributing horn orchestrations for five major numbers and underscoring cues as well. While playing the In the Heights stage production in 2008 he met chief arranger Bill Sherman, who went on to hire Fiedler for a reboot of The Electric Company and then Sesame Street as well.
Joe Fiedler, trombone
Jeff Lederer, soprano & tenor saxophones, clarinet
Steven Bernstein, trumpet, slide trumpet, flugelhorn, G trumpet
Sean Conly, acoustic and electric bass
Michael Sarin, drums
Special Guest:
Miles Griffith, vocals (tracks 4 & 7) 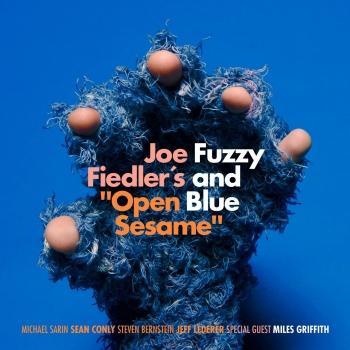 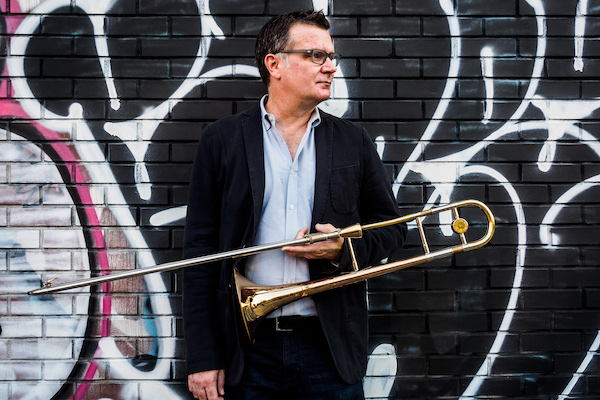 Joe Fiedler
The New York Times has pinpointed a “feeling for a rugged but jaunty experimentalism” in the music of trombone veteran Joe Fiedler, a figure as esteemed in New York jazz circles as he is in the Afro-Caribbean and pop scenes. He’s an adventurous improviser and bandleader whose small-band outings include The Crab, Sacred Chome Orb, Joe Fiedler Plays the Music of Albert Mangelsdorff, I’m In and Like, Strange. His two releases by the unique low-brass unit Big Sackbut — a trombone/tuba corollary of sorts to the World Saxophone Quartet — have also cemented Fiedler’s reputation as a musical thinker with boundless imagination.
Owing to his long experience in pit bands, salsa groups and countless other professional settings, Fiedler had the opportunity to play trombone on Lin-Manuel Miranda’s show In the Heights (not long before Hamilton’s runaway success). Tony Award-winning orchestrator Bill Sherman was on the gig and took to Fiedler, bringing him on board the newly revived children’s show Electric Company. After three seasons, Sherman and Fiedler made the transition in 2009 to Sesame Street. From playing 350 gigs a year on the freelance circuit, Fiedler officially became a Sesame Street music director, working on what would become hundreds of song arrangements and thousands of underscoring cues (and still climbing). His latest small-group CD, Open Sesame, grapples with the legacy of the storied show of which he’s become an integral part. On it he reimages the timeless music of Joe Raposo, Jeffrey Moss and others on his own terms, with help from tasteful hell-raisers Jeff Lederer, Michael Sarin, Sean Conly and guest Steven Bernstein (of Sex Mob fame).
A Pittsburgh native and a New Yorker since 1993, Fiedler studied at Allegheny College and the University of Pittsburgh before launching into work as an in-demand sideman. He’s become one of the first-call trombonists in the world, featured on more than 100 recordings. He’s had extensive experience in the heart of the flowering big band scene, playing with Maria Schneider, Chico O’Farrill, the Mingus Big Band, Andrew Hill, Jason Lindner, Dafnis Prieto, Kenny Wheeler, Satoko Fujii, Miguel Zenón and many more. In smaller units he’s played with Lee Konitz, Anthony Braxton, Cecil Taylor, Myra Melford, Matt Darriau’s Ballin’ the Jack, David Weiss’s Endangered Species and a host of others. Fiedler also paid years of dues on the salsa and Latin circuit with Celia Cruz, Eddie Palmieri, Willie Colon, Ralph Irizarry and other major acts. His pop credits include Jennifer Lopez, Marc Anthony, Wyclef Jean, The Four Tops, Melba Moore and Leslie Gore, to name a few.
Without doubt this mass of musical experience filters into the trombonist’s mindset, the way he looks at craft, audience, band dynamics and perhaps most of all fun. Coming up in the ’80s, he recalls his favorite bands as the Jazz Passengers, Carla Bley, Ray Anderson — “bands and musicians that had this sense of humor, this sense of burlesque,” he says. Recalling the last great gasps of the downtown scene and his brushes with the early Knitting Factory bands, Fiedler knows that while many of those touchstones have disappeared, they live on still in today’s sensibilities and methods, for Fiedler as for many likeminded peers.
Downbeat and others have noted Fiedler’s effortless way of traversing charged free improvisation and music of more established tonal and formal parameters — “out” vs. “in,” as jazz musicians sometimes call it. He’s apt to draw out long and lustrous melodic tones while also manipulating his trombone sound with multiphonics and other extended techniques (playing one note and singing a higher note, sometimes producing an overtone to complete a chord). The deep sense of blues, tailgate and other earlier jazz approaches to the horn come through in Fiedler’s music, as do the sonic innovations of Mangelsdorff, or the mainstream hard-bop aesthetics represented by Slide Hampton, J.J. Johnson, Steve Turre and so many more. Melding it all into a signature voice, Fiedler harnesses the top talents of dear friends and associates in an endless quest to broaden his instrument’s reach. As veteran journalist Dan Ouellette has written, “It takes a true believer in [the trombone’s] potential for jazz esprit to courageously explore its range of conversation. That’s why Joe Fiedler is so impressive.”