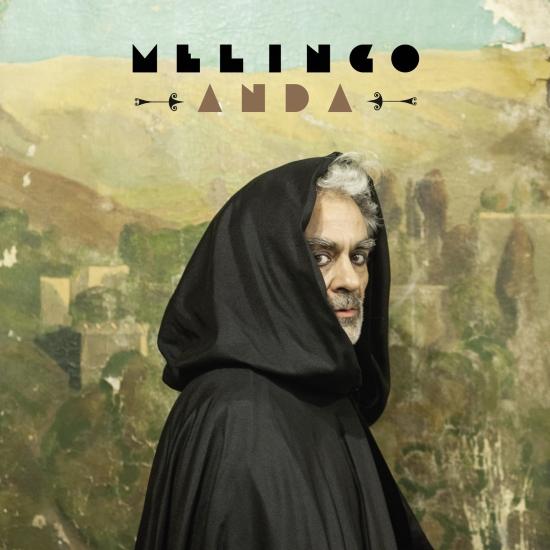 Made up of tracking shots and freeze frames, Anda is the most cinematic and perhaps the most journey-like project of the Argentinian actor, poet and clarinetist, who continues to paint the pages of his own personal atlas in chiaroscuro. Anda continues along a vagabond’s trail, a path first cleared with the albums Corazón & Hueso (2011) and then Linyera (2014). Melingo’s tale maps an imaginary land in which a heaven-sent tramp, a sort of mystical enigma straight out of a Chagall ceiling, might interact with the Satie of Gnossienne – an immutable melody which suits him down to the ground – or with pre-fame Gainsbourg. This ‘Intoxicated Man’ finds his own vision of pink elephants, spiders on elegant shirtfronts and bats in the attic, all expressed in the language of an Argentinian Tom Waits.
This surreal reality is rooted in the 1930s, when tango star Gardel sang old fox- trots, tarantellas and paso dobles and when tropical ‘característicos’ bands with trumpets as well as guitars and sometimes bandoneons emulated the oriental lutes that were busy reinventing tango on the shores of the Mediterranean.
This is no coincidence. If this record is his most operatic by far, it’s because it combines, in the life story of Melingo, the Latin ‘trasnochador’, ‘porteño’ (the night-bird port people of Buenos Aires), the Greek bard straight out of Buñuel or Fellini (he’s known as ‘El Turco’ in his neighbourhood), and that syncretic form of blues born in the shady bars of Rio de la Plata, i.e. tango itself.
It’s an hallucinogenic documentary made under the auspices of Osvaldo Pugliese (1905-1995), ‘Saint’ Pugliese, the pagan icon, the lucky charm, the ‘anti-jinx’ (as he was described by cult singer Charly Garcia). At his home in 1987 with Luis Alposta, poet, illustrator, painter, essay writer and composer of many of Melingo’s texts, the man who saw himself as a ‘tango labourer‘ announced he would be working on a long instrumental prologue. This set the tempo: a floating, rubato beat, ‘stolen time’; plastic and musical elasticity in total freedom.
Thus Anda, which could be translated as Walk! or ‘Run for your life!’, is a project which brings together sound, a scenario, pictorial effects (with frescoes from the salons of the Alhambra in the booklet), costumes and film (the video is shot in a Buenos Aires prison by film-maker and author Luis Ortega* (Caja Negra, Monobloc, Lulu)) Influences include Tsunayoshi Megata, the Japanese aristocrat who introduced tango to Japan in the twenties, Rudolph Valentino and Carmen Miranda, Andalusian dress, a Turkish turban and a Columbian poncho... a melody played by Feliciano Brunelli’s band in 1943, when tangos and ‘typical’ Creole music were often paired up at dances. Anda is Melingo’s most conceptual, magical and accomplished work to date.
Like an illusionist straight out of a Borges novella, Melingo is back, with his voice, his clarinet and his sense of drama. Listening to ‘Anda’ is like enjoying a Fellini film with your eyes closed, losing yourself in a display of sound designed as a suite of baro- que scenes in which each piece pulsates and destabilises us. In it, the original tango is reborn, a little as if Carlos Gardel was at the centre of a form of arty neo-rock fiction, with a gallery of characters featuring Erik Satie and Serge Gainsbourg among the spectres the Argentinian actor and poet conjures forth.
Daniel Melingo, vocals, clarinet
Javier Casalla, violin, viola
Patricio Cotella, double bass
Muhammad Habbibi Guerra, guitar, laùd, serrucho, bouzouki, vocals, double bass
Pedro Onetto, piano
Gustavo Paglia, bandoneon
Juan Ravioli, bouzouki, baglama, acoustic guitar, Farfisa organ, samples, vocals
Gonzalo Santos, creole guitar, trumpet, flugelhorn
Dabid Gonzales, trombone
Axel Krygler, vibraphone
Felix Melingo Torre, flute, vocals
Fernando Samaleoa, steel drums
Miguel Zavaleta, vocals
Recorded by Juan Ravioli in 2015 at studio La Cocina de Betty (Buenos Aires, Argentina)
Mixed by Juan Ravioli in March 2015 at Estudios Fort (Buenos Aires, Argentina)
Engineered by Jorge Portugués Da Silva
Mastered by Jon Astley on March 21st 2016 at Close to the Edge (London, United Kingdom)
Produced by Daniel Melingo