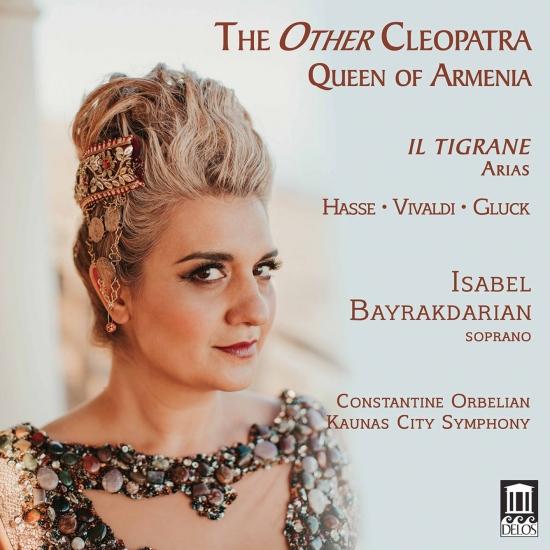 Info zu The Other Cleopatra: Queen of Armenia

Yes, there was another Cleopatra! She was married to Tigranes the Great, King of Armenia, and together they created an Armenia that reached from the Caspian Sea to the Mediterranean.
The resplendent and regal voice of soprano Isabel Bayrakdarian is perfectly suited to the role of Cleopatra. Bayrakdarian shines in arias from three rarely heard operas about King Tigranes and his queen. Bayrakdarian’s multi-hued voicerelates the passion, drama, and fervor of the love story of Tigranes and Cleopatra.
Bayrakdarian sparkles in five arias from Il Tigrane by Baroque master Johann Adolph Hasse, famous in his day as one of the foremost composers of opera. Arias by Vivaldi and Gluck add further excitement to the album. Vivaldi, known primarily for his instrumental music, stands out as an opera composer, while Gluck, in an early opera, already shows his mastery of the form.
Bayrakdarian is supported by the GRAMMY®-nominated team of Constantine Orbelian — “the singer’s dream collaborator” (Opera News) — and his marvelous Kaunas City Symphony Orchestra.
Isabel Bayrakdarian, soprano
Jory Vinikour, harpsichord
Kaunas City Symphony
Constantine Orbelian, conductor 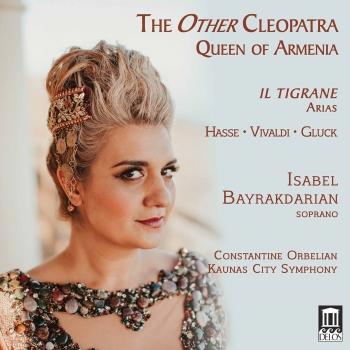 The Other Cleopatra: Queen of Armenia 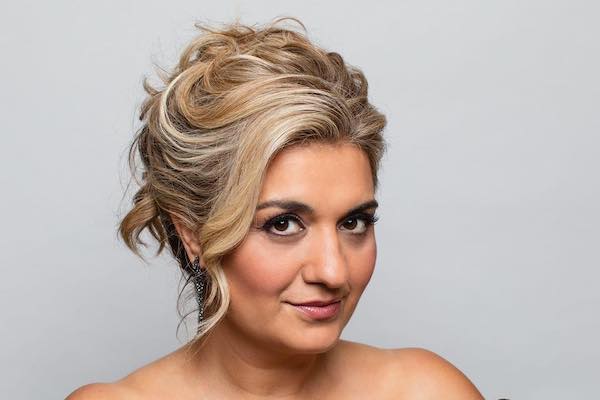 Isabel Bayrakdarian
It’s not every prima donna who can boast a degree in biomedical engineering, but then, Isabel Bayrakdarian isn’t your average prima donna. In a career still in its second decade, an eagerly anticipated visitor to opera houses and concert halls the world over, she’s become as celebrated for her beauty, presence, and style as for a strikingly multihued voice that’s wholly in sync with the rest of her.
A winner of the Metropolitan Opera National Council Auditions—the same year she graduated from the University of Toronto cum laude with a Biomedical Engineering Degree—Ms. Bayrakdarian thereafter found her career taking rapid wing. She scored a notable success in the Lyric Opera of Chicago’s world premiere production of William Bolcom’s A View from the Bridge; the following year, she walked away from Plácido Domingo’s prestigious Operalia competition with first prize. More debuts followed, including her San Francisco Opera debut, as Valencienne in The Merry Widow, and her Metropolitan Opera debut, in the New York premiere of Bolcom’s opera; a season later, she won plaudits as Teresa in the Met premiere of Berlioz’s Benvenuto Cellini. Mozart became a specialty: Zerlina in Don Giovanni (New York, Houston, Salzburg), Susanna in Le nozze di Figaro (Los Angeles, London), and Pamina in The Magic Flute (New York, Toronto). Her roles at Toronto’s Canadian Opera Company range from Gluck’s Euridice to Debussy’s Mélisande to Poulenc’s Blanche in Dialogues des Carmélites; and away from Canada, she has shone as Monteverdi’s Poppea in Barcelona, Handel’s Romilda (Serse) in Dresden, and Janáček’s Vixen in New York, Florence, and the Saito Kinen Festival in Matsumoto, Japan.
But opera is only one page of the Bayrakdarian résumé. An ever-active concertizer, she has appeared with the premier orchestras of the world under the baton of such eminent conductors as Seiji Ozawa, James Conlon, David Zinman, Michael Tilson Thomas, and Alan Gilbert.
Her versatility is also reflected in being the featured vocalist on the Grammy-award winning soundtrack of the blockbuster film The Two Towers from The Lord of The Rings trilogy and on the soundtrack of Atom Egoyan’s Ararat. A trance music collaboration with the electronica band Delerium garnered yet another Grammy nomination. She sings on the BBC-produced short film HOLOCAUST – A Music Memorial Film from Auschwitz, as well as her Gemini-nominated film Long Journey Home, documenting her first visit to her ancestral homeland Armenia.
Bayrakdarian is the winner of four consecutive Juno Awards for Best Classical Album, and her latest recording, Mother of Light, was nominated for a 2018 Juno Award. Her recordings with orchestra include Henryk Górecki’s Symphony No.3 with John Axelrod conducting the Danish National Symphony Orchestra, released on the Sony Classical label, Gustav Mahler’s Symphony No.2, with Michael Tilson-Thomas conducting the San Francisco Symphony, and Respighi’s Il Tramonto with Orchestre Symphonique de Laval.
She is also the recipient of many awards, including the Marilyn Horne Foundation Competition Award, Queen Elizabeth II Golden Jubilee and the Diamond Jubilee Medals, the Arbor Award from the University of Toronto, the George London Foundation Award, Canada Council’s Virginia Parker Prize, and the Republic Of Armenia “Komitas Medal”. Most recently, she was awarded the “Movses Khorenatsi” medal, the Republic of Armenia’s highest cultural award. She holds an Honorary Doctorate from Canada’s Wilfrid Laurier University, and an Honorary Fellowship from the Royal Conservatory of Music. Ms Bayrakdarian is Associate Professor of Voice at the University of California Santa Barbara (UCSB)

Booklet für The Other Cleopatra: Queen of Armenia