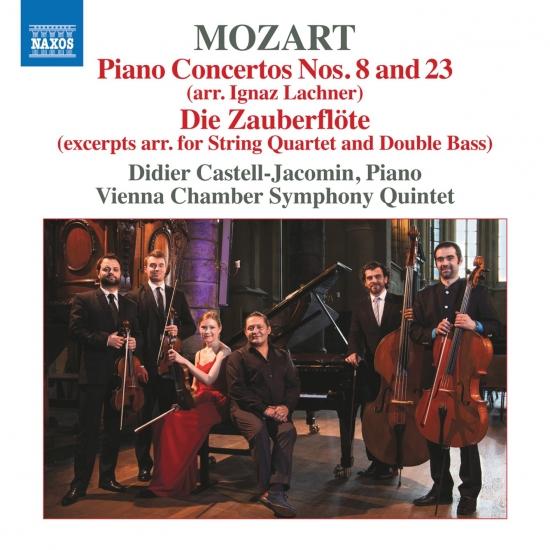 So greatly did Ignaz Lachner venerate Mozart that he arranged twelve of the 27 piano concertos for performance by small ensembles. Lachner, who had known Schubert in Vienna and had met Beethoven, was superbly equipped for these arrangements ensuring that the string quintet of soloists, with the double bass largely doubling the cello role, sounds thoroughly idiomatic. The three selected works represent the different sized orchestras Mozart employed, K. 246 being the most lightly scored, and K. 488 the most complex. The anonymous arrangement of excerpts from Die Zauberflöte proves equally vital and attractive.
Didier Castell-Jacomin, piano
Vienna Chamber Symphony Quintet 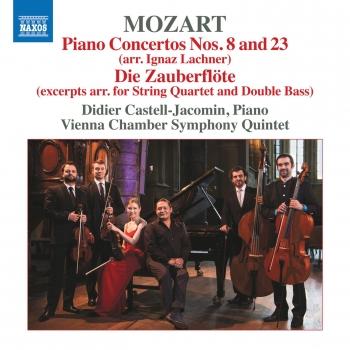 Didier Castell-Jacomin
Disciple of Catherine Collard, Georgy Cziffra and Fausto Zadra, himself a disciple of Vincenzo Scaramuzza,Didier Castell-Jacomin, is a renowned performer who has already performed on the greatest venues. Didier Castell-Jacomin, voluntarily exiled from France, pursues a remarkable international career. His debut at the Berlin Philharmonic with the Berlin Chamber Soloists, which was acclaimed by the public and critics, allowed him to play at the Amsterdam Concertgebouw, the Carnegie Hall in New York and at numerous American festivals as well as in London, Brussels and Spain. In Germany, Didier Castell-Jacomin played with the Baden Baden Philharmonie, in Switzerland at the New Year Festival in Gstaadt and in France, salle Cortot, Théâtre de l'Athénée, Theatre du Colisée etc... Norman Lebrecht, usually fierce, saw in him: "A sparkling pianist" and Paul Badura-Skoda, after they had played together affirmed that he was "a true Mozart".
Didier Castell-Jacomin's extensive discography includes works by Mozart, Beethoven and Schumann. Her latest opus is dedicated to women composers (Chaminade, Bonis, Clara Schumann...). His recordings have been acclaimed by critics (4 Diapason, Piano Maestro...).
Since 2017 Didier Castell-Jacomin and the Wiener Kammer Symphonie Quintet have been collaborating and recording for the NAXOS label.
In 2019,Castell-Jacomin will play in the US, (Lalo piano Concerto), Berlin, Avignon (with the philharmonic, with Cordelia Palm, Konzertmeister in Mozart and Haydn's double concerti, in Lens, Catania to name a few.