This Is Not A Lullaby Channa Malkin 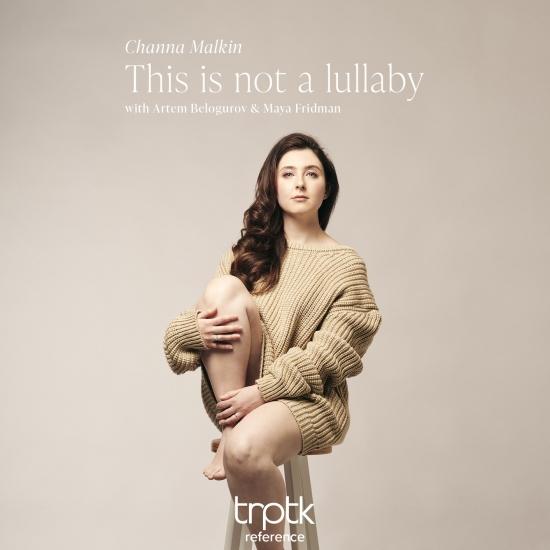 Info zu This Is Not A Lullaby

Dutch soprano Channa Malkin releases her new album This is not a lullaby with immersive record label TRPTK on 7 May 2021. Joined by cellist Maya Fridman and pianist Artem Belogurov, this will be Malkin’s second solo album, featuring song cycles which present her intimately personal perspective on motherhood with music by 20th and 21st century composers Mieczysław Weinberg, Sir John Tavener and her father Josef Malkin. Her choice of programme is bound together by the all-Russian text (Malkin’s mother tongue), family ties and cultural heritage through her father’s and Weinberg’s songs, and the distinctly female voice coming through the text in all three works with the poetry of leading writers including Gabriela Mistral and Anna Akhmatova set to music by Weinberg, Tavener and Josef Malkin.
Channa Malkin said, “Becoming a mother has changed me in more ways than I can put into words. In the midst of the coronavirus pandemic, it has been a blessing to work on this highly personal project inspired by my son Ezra.”
Channa Malkin is a singer known for her broad repertoire, from Italian baroque opera to Sephardic chamber music. She is a recent nominee of the Grachtenfestival Prize 2020 and debuted at the age of 17 as Barbarina (Le nozze di Figaro) at the Dutch National Opera. She has since performed on the operatic and concert stages and in song recitals across Europe and the United States.
Described as an artist who “channels her unbridled creativity into socially engaged and highly personal programs” (Aart-Jan van de Pol, jury member Grachtenfestival Prize), Channa Malkin holds up an alternative but ultimately real experience of motherhood and womanhood in this album, going against the archetypal and one-dimensional trope of a mother rocking her child to sleep with soothing lullabies.
Mieczysław Weinberg (1919 – 1996) was a Polish-born Soviet composer whose prodigious and influential output has only in recent years gained the recognition it deserves. His song cycle for soprano and piano, Rocking the child, a later work composed in 1973, uses the text of Nobel Prize- winning Chilean poet Gabriela Mistral from her book Ternura (Tenderness, 1924) in Russian translation. As a father to two daughters, Weinberg could relate to the mother’s and caregiver’s emotional world evoked in many of the eleven songs, while also understanding through first-hand experience of displacement through war and persecution how to enter the world of children who are isolated and have no mothers for others in the cycle. It is the particularly honest portrayal of what it means to be a mother which drew Malkin to this work during a sleepless night following the birth of her son, as well as the opportunity to showcase and pass on the underperformed vocal music of a composer who shares much of the cultural heritage of her own family. The track ‘Rocking the cradle’ will be released as a single in time for UK Mother’s Day, Sunday March 14th.
Channa Malkin’s father, Josef Malkin, was born in Georgia in 1950 before spending time in Moscow, Israel and the Netherlands. He spent twenty-five years of his career as a violinist in the Royal Concertgebouw Orchestra, turning to composition in 2004 with his song cycle Black Flowers which has been performed internationally. Alongside numerous instrumental chamber pieces, Malkin’s vocal repertoire includes works in Dutch, Hebrew, English and Russian which have nearly always been inspired by Channa’s voice and are often premiered by her. Five Russian Songs for soprano and piano was composed for Channa using poetry by a diverse range of authors along the themes of childhood and mortality, with poetry by the iconic Russian poet Anna Akhmatova (1889-1966), Jewish-Crimean poet Ilya Selvinsky (1899-1968), ‘forgotten generation’ Soviet Boris Ryzhy (1974- 2001) and contemporary Amsterdam-based poet Vladimir Riabokon-Ribeaupierre (1957-). Premiered in August 2020 at the Grachtenfestival and published recently as part of a larger collection of twelve songs, this will be the world premiere recording of the song cycle.
Sir John Tavener (1944-2013) was one of the leading British contemporary composers of his generation. Known for his religious works, he gained worldwide recognition for pieces such as The Protecting Veil, Song for Athene and The Lamb. Through explorations of Russian and Greek culture in later life, Tavener was inspired by fragments of poetry by the Russian poet Anna Akhmatova to write Akhmatova Songs for soprano and cello, embracing elements of mysticism in his creation. While this is perhaps the least literal portrayal of motherhood in Malkin’s programme, Akhmatova Songs poses a confrontation with mortality that being a mother can stimulate. According to Channa, it highlights how the identity of the multifaceted woman that exists behind every mother is perhaps threatened by motherhood itself but can be reclaimed.
Recorded in December 2020 in the main hall of the Philharmonie Haarlem, this album showcases the quality of sound achieved by the young TRPTK label. Founded in 2014 by producer Brendon Heinst, the label is known for its sonic immersion through perfect spatial and timbral fidelity using multichannel processes and its celebration of ‘liveness’.
Channa Malkin’s “profound storytelling” with her programming, combined with the immersive quality of the TRPTK label, has served to create a unique album underlining her artistic values and bringing to light both familiar and unknown works through the lens of a mother, woman and musician.
Channa Malkin, soprano
Artem Belogurov, piano
Maya Fridman, cello 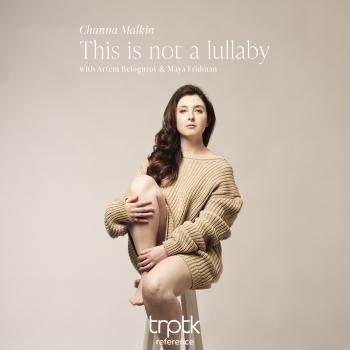 This Is Not A Lullaby 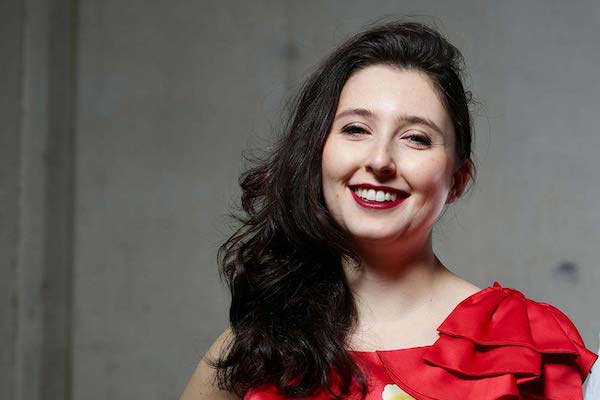 Channa Malkin
is known for her compelling musical personality and unbridled creativity. She was recently praised by De Volkskrant as “a young sound with a mature treatment. Her story-telling is profound”. She excels in a broad repertoire, from Italian baroque opera to Sephardic chamber music.
A recent nominee of the Grachtenfestival Prize 2020, she debuted at the age of 16 as Barbarina (Le Nozze di Figaro) at Dutch National Opera. In summer 2021, she will sing the role of Second Niece (Peter Grimes) in a spectacular seaside production led by Arnaud Oosterbaan and Paul Carr.
On the concert stage, Channa recently jumped in at a one day’s notice for Holland Baroque and Alexander Weimann in Handel’s Dixit Dominus and the world premiere of Hayes’ newly rediscovered oratorio The Fall of Jericho. Previous highlights include her performances of the Boy Solo in Bernstein’s Chichester Psalms with the Royal Concertgebouw Orchestra under the baton of Mariss Jansons, and the world premieres of Yizkor and Black Flowers, a cantata and song cycle for soprano, orchestra and chorus by her father Josef Malkin, in New York City, Salt Lake City, Sofia (Bulgaria), and with the Netherlands Philharmonic Orchestra at the Muziekgebouw in Amsterdam. She sang the soprano solos in Bach’s St. Matthew and St. John Passion and B Minor Mass with the Jerusalem Baroque Orchestra and various orchestras within the Netherlands. Channa regularly works as a soloist with baroque ensemble La Sfera Armoniosa led by theorbist Mike Fentross, with whom she recently performed Couperin’s Leçons de Ténèbres. This season she has several early music projects with Capriccio Stravagante and La Sfera Armoniosa.
Channa has demonstrated her unbridled creativity and entrepreneurship with the creation of her own multimedia opera pastiche Handel goes Tinder, together with violinist Anastasia Kozlova and writer/director Michael Diederich. Channa has performed this production 33 times for sold-out venues and festivals in the Netherlands. In 2021/22, Handel goes Tinder will play at the Handelfestpiele in Göttingen.
On the operatic stage, Channa’s performed roles include Despina (Così fan tutte), Zerlina (Don Giovanni), Charite (Cadmus et Hermione), Eve (In the beginning, a world premiere by Carlijn Metselaar), and all female roles in a staged production of Grieg’s Peer Gynt at the Amsterdam Concertgebouw with the Netherlands Philharmonic Orchestra. As a Young Artist at the Rotterdam Opera Days she debuted Poppea (L’incoronazione di Poppea), which became one of her dream roles. While covering the role of Dalinda in Ariodante at the Dutch National Opera in 2015, Channa worked with baroque experts such as Andrea Marcon, Sandrine Piau and Sarah Connolly.
In addition to opera and concert, Channa enjoys telling stories and connecting intimately with audiences in song recitals. Her debut album Songs of Love and Exile, together with guitarist Izhar Elias, was hailed by the international press as “Glorious“. In the 2020/21 season, Channa Malkin and Izhar Elias will continue to perform their album programme at various festivals and concert halls as part of their Dutch tour, having already performed it at Dutch National Opera, among other venues.
Channa was born in Amsterdam into a family of classical musicians. She studied at the Utrecht Conservatoire with Charlotte Margiono, while simultaneously performing as a soloist in the Netherlands and abroad. After graduating with honours from the conservatoire, Channa went on to study with Rosemary Joshua, with whom she discovered her love for early music. She continues working with her vocal coaches Manuela Ochakovski and Roberta Alexander on new repertoire.
Maya Fridman
Born in 1989 in Moscow, Russia, Maya Fridman is a talented young artist residing in The Netherlands. From her early years of playing the cello, Maya was recognised as a prodigy and was taken under the hood of the Foundation of Yuri Bashmet, where she took part in various TV and Radio programs. While studying at the Moscow State College of Music named after Alfred Schnittke, she was awarded as the First Prize Winner in the International Festival of Slavic Music among many other reputable awards. In 2010, Maya has been granted admission at the Conservatory of Amsterdam where she studied under professor Dmitry Ferschtman. Here, on the 10th of June in 2016, she successfully finished a master’s degree with the highest honours, Cum Laude. For the last nine years, Maya has been performing regularly in Europe, in renowned venues such as the Royal Concertgebouw of
Amsterdam, Muziekgebouw aan ‘t IJ, TivoliVredenburg and the Vereeniging. Due to her vast musical interests, she always had a passion for improvisation and playing diverse musical styles.
Maya is musician-in-residence with Gaudeamus and one of the finalists of Dutch Classical Talent in 2018/2019. In 2018 she was nominated for the Grachtenfestival Prize.
Artem Belogurov
Known equally for his “verve, wit, and delicatesse” (Boston Musical Intelligencer) and his “infinite tenderness” (Evening Odessa), Artem Belogurov has an extensive repertoire, ranging through four centuries of solo and chamber works. His interest in period performance leads him to historical keyboards, including clavichord, harpsichord, and fortepianos spanning the eighteenth and nineteenth centuries. As a soloist and in chamber groups, Artem has performed in a wide variety of venues, among them Lincoln Center, Library of Congress, Jordan Hall, Harvard Musical Association, the Universität der Kunste in Berlin, the Musikhochschule in Hanover, St Andrews University in Scotland, Tivoli Vredenburg in Utrecht, and Muziekgebouw in Amsterdam. His critically acclaimed album of solo piano works by the late nineteenth century American Romantic composers, recorded on a Chickering piano built in 1873, was released by the London-based label Piano Classics in 2015. The 2019-2020 season included a North American tour with Concerto Köln as a soloist and continuo player, performances with his duo partner cellist Octavie Dostaler- Lalonde and with the early music ensemble Postscript, of which he is a founding member. In 2021, Artem will make his debut at Wigmore Hall. Artem won first and second prizes at international competitions in the Netherlands, Germany and Japan. After studying modern piano at the New England Conservatory in Boston, Artem moved to Amsterdam where he studied fortepiano and clavichord at the Amsterdam Conservatoire with Richard Egarr and Menno van Delft and graduated receiving cum laude in 2016.

Booklet für This Is Not A Lullaby