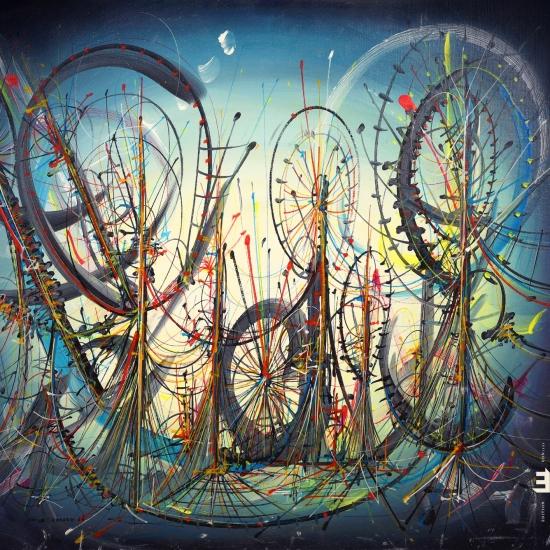 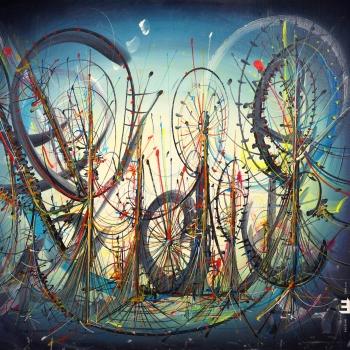 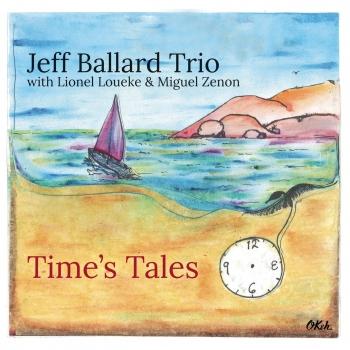 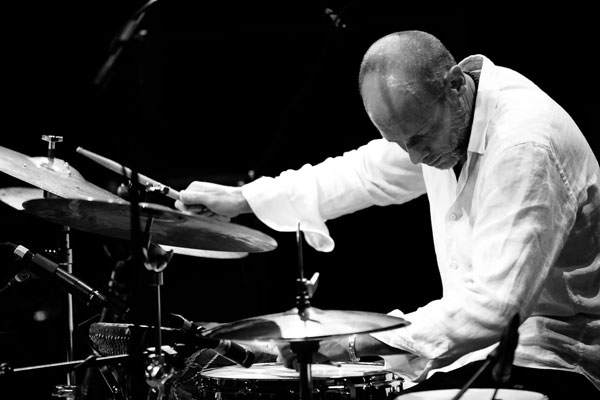 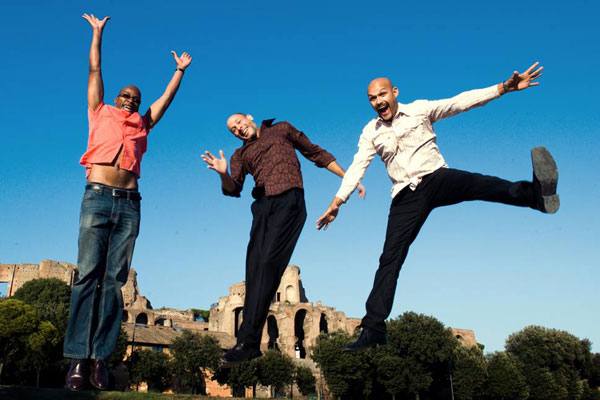 Jeff Ballard
grew up in Santa Cruz, California. He recalls when he was a child laying in bed listening to the music his father would play every weekend: Count Basie, Ella Fitzgerald, Louie Armstrong, Sergio Mendez, Oscar Peterson, Milton Nascimento; how he loved the sound and the speed of Ed Thigpen’s brushes on the snare. “I remember feeling the power of a Basie big band shout chorus which would then suddenly disappear into some quiet dancing riff. It was the swing in it, which excited me the most. I also remember how it felt traveling thru sounds of the jungle in a Milton Nascimento record. The drums, percussion, and voice, would sound as if they either came from the earth or were made of water. And I was so happy to hear the joy of Ella and Louie singing and playing together. I think that that early exposure has made me part of what I am today, especially in regards to my love for sound.”
In a community college he studied music theory and played in a big band as well as started working in small groups that played music for all kinds of occasions. He realized then that there are ways to play the drums, which are particular for each occasion. Each genre has requirements with needs to be met. “A big band needs a propelling and simple drive, more supportive, for the ensemble to sit in. Brazilian drumming needs that driving bass drum with an insistent yet light dancing quality with the hands. Reggae asks for a sophisticated groove comparable to that of swing. Afro Cuban music I can compare to boxing: something like sparring with an opponent. I think the challenge is in the search for finding the music’s particular needs. The joy is in the discovery.” During this time, while living in and playing around San Francisco, he became absorbed with ‘modern’ jazz. “ Hearing Tony Williams play with Miles completely changed the way I played drums. Hearing John Coltrane and Elvin Jones, and listening to Ornette Coleman’s music changed my whole world. It was like coming home.”
At the age of twenty-five he began playing with Ray Charles. “ We toured 8 months straight every year with the band. Although we often played the same songs and arrangements every night, Ray was always able to make us feel as if it was for the very first time. The drum chair was the best seat in the house really. I only had to watch Ray’s feet to know where and what he wanted the groove to be. What a great school.”
After three years with Ray Charles, Jeff Ballard move to New York City where he found like-minded musicians who were drawing on tradition as well as searching for their own interpretation of playing and expression in music. “Kurt Rosenwinkel, Mark Turner, Brad Mehldau, Avishai Cohen, Guillermo Klein, Larry Grenadier, Ben Allison…and so many others. I started playing music which was of a more personal nature and which drew from an extremely wide palette of influence. I remember, for example, investigating Argentine rhythms and transposing them on to the drumset; or introducing middle-eastern rhythms to my drums. I guess you could say the approach here was in finding the sound equivalent on the drums to something from the original: the dry staccato sound of the dancer’s shoes on a hard wooden floor, the ornamental sounds of bells strapped to the wrists of the percussionists, and then synthesizing my own version of what I felt would fit musically into the drums. Then there were investigations in finding my own things with the drums. Playing and recording with all of these musicians have opened up the opportunity for me to explore my infatuation with sound. It is the sound, not the note per se, which touches me the most. ”Jeff Ballard has also played and toured with Eddie Harris, Bobby Hutcherson, Buddy Montgomery, Lou Donaldson, Mike Stern, and Danilo Perez. He joined Chick Corea in 1999 and continues to play in his various projects. “ I learned so much playing with him during those six years. I encountered thru him a high speed of thought in improvisation and a constant clarity of expression in the music. The chance to play in all kinds of different musical situations like with his sextet Origin or the New Trio or large symphonies brought a heightened awareness of touch to my playing as well. I very rarely used monitors on the gig. It was all about hearing the sound of the instruments themselves on stage.”
Currently Jeff Ballard is a member of the Brad Mehldau Trio, Joshua Redman’s Elastic Band, performs periodically with Corea, and is a co-leader of Fly, a collective trio with Mark Turner and Larry Grenadier. Fly is a sparse unit with a focused approach in which the lead voice often changes instruments, or simply vanishes into a three-way dialogue. “Interdependence is total. We all wanted to pare down and see what we could do sonically with this type of instrumentation. There is an extra harmonic and sonic space compared to other formations. Changing the traditional roles of our instruments is just one consequence of this. Also it allows us to explore our own compositions.” Their latest self entitled record, Fly, and ensuing concerts have won critical acclaim as best of the year 2004.