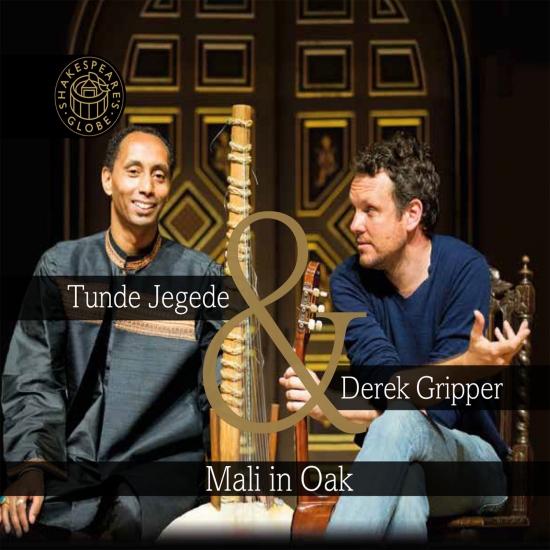 Two of the world’s most unclassifiable string players join the new Globe Music label to commemorate their sold-out performances in John Williams’ widely acclaimed 2014 and 2015 concert series at Shakespeare’s Globe. Jegede, a master kora player, cellist and composer of Nigerian and Irish decent brings his dynamic and cosmopolitan musical intelligence to bear on the heart of the Malian griot repertoire. South African guitarist Derek Gripper, who has been earning slack-jawed praise from Capetown to Carnegie Hall adapting music for the 21-string kora to the 6-string classical guitar, here records with a kora for the very first time.
A combination of duets and solos, both artists record some of their most personal compositions and arrangements in an expansive and loving journey of West African songcraft. Originally paired and programmed by Globe Director of Music Bill Barclay, Jegede and Gripper’s duet concert was the only performance in the John Williams series that the great guitar master, feeling he had nothing he could add, sat out to enjoy entirely as a listener.
„…wholly enjoyable, quite outstanding, an entrancing sound, a kind of ecstatic tingling in the ear underlay almost everything that was played“ (The Independent)
„Absolutely impossible until I heard Derek Gripper do it.“ (John Williams)
„Gripper has brilliantly transferred the kora repertoire onto a regular six string guitar. He sees Toumani Diabaté as the Segovia, or indeed John Williams, of the kora, championing it as a solo instrument and ingeniously taking it back to the guitar. He’s opening a whole new repertoire of classical guitar music...bringing African guitar into the classical mainstream. This beautiful acoustic space [Shakespeare’s Globe’s candlelit Sam Wanamaker Playhouse] makes you hold your breath and focus in a way you never do in an amplified concert. You put more in and get more out. For everyone it was a revelation.“ (Simon Broughton, Songlines Magazine)
Tunde Jegede, kora
Derek Gripper, guitar 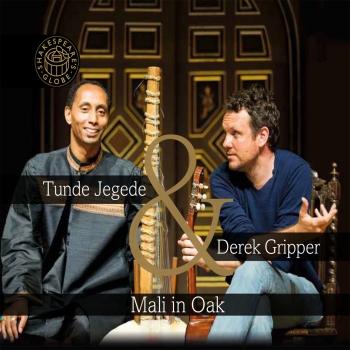 Tunde Jegede
is a composer and multi-instrumentalist who is uniquely placed between the worlds of Contemporary Classical, African and Pop music. He is a prolific Producer/Song writer and has worked across several genres both as a performer (Cello, Kora, Piano and Percussion) and producer.
Tunde was born in 1972 and is a product of a cosmopolitan city such as London. In North London's infamous Keskidee Centre, Britain's first Black Arts Centre, his appreciation of African Diasporic culture was initiated and nurtured. From an early age he was exposed to resident and visiting artists who worked in a multi-disciplinary mode such as: Bob Marley, Walter Rodney, Edward Braithwaite, Angela Davis and Linton Kwesi Johnson. It was here, his path as an artist began.
Tunde's apprenticeship in African music began in 1978 and was further developed in 1982 when he first went to the Gambia to study the ancient Griot tradition of West Africa, with Amadu Bansang Jobarteh, Master of the Kora (West African Harp-Lute). The Jobarteh family are one of five principle musician families within this unique hereditary Oral tradition, which dates back to at least the 13th century.
His appreciation of Western Classical music began with his grandfather's love of Bach and by observing his work as a church Organist. Tunde also studied Cello from the age of 8 and over the years was taught by esteemed luminaries from the Classical world including: Alfia Bekova, Elma de Bruyne, Joan Dickson and Raphael Wallfisch at the Purcell School of music and later the Guildhall School of music.
In 1988 Tunde became fascinated with Jazz and worked and toured with ex-members of the Jazz Warriors founded by Courtney Pine & Cleveland Watkiss. He formed his own Jazz Ensemble, The Jazz Griots, with the sole purpose of exploring the connections between African and African Diasporic forms of music.
In 1991 he pioneered African Classical Music in the UK with the first ever national tour of the African Classical Music Ensemble, which nurtured his burgeoning composer credentials. In 1995 a BBC TV documentary, 'Africa I Remember' was done on Tunde's music and centred around his orchestral work. In this programme he performed new compositions alongside the London Sinfonietta, which was conducted by Markus Stenz.
With his now fully fledged composer credentials, he was appointed as innovations composer for the Eastern Orchestral Board, who facilitated his working with many of the major orchestras in the UK including: The Royal Philharmonic Orchestra, The Philharmonia, Britten Sinfonia, Viva Sinfonia, The London Mozart Players and The Bournemouth Symphony Orchestra.
All these prestigious orchestras and ensembles were keen to play his original and highly evocative compositions. During this period, he was specially commissioned to write a Percussion Concerto for Evelyn Glennie and Double Orchestra, an Oratorio for the City of Milton Keynes and a string quartet for the Brodsky Quartet as a part of their 'Beethoven Op18' recording, which was released on the Vanguard label and is still being performed by them worldwide.
Over the years Tunde has kept his creative diversity intact by working closely with singers, vocalists, and spoken word artists from a wide range of traditions including: Opera, Pop, R'N'B, Reggae, Hip Hop, and Jazz. In 2002 he started ACM Productions with the primary goal of creating accessible quality productions across a small spectrum of genres, namely: Urban, Pop, Classical and Jazz.
Derek Gripper
For over ten years Derek Gripper has produced some of South Africa’s most extraordinary musical works by fusing the country’s disparate creative traditions with styles throughout the world. His music draws on European classical traditions, avant-garde Brazilian works, Malian kora works, Cape Town’s folk styles such as ghoema/goema and vastrap, and even Indian classical music, all the while synthesising them into a style uniquely his own.
Derek Gripper’s discography already includes one of the most musically mature and visionary albums created in South African history-the superb ensemble effort Sagtevlei-and he has maintained this creative momentum through his solo works as well as through his collaborations with artists ranging from Xhosa instrumentalists, Indian tabla masters, and a select group of composers whose works he has brought to life on the guitar. His most recent work has drawn on the compositions of master musicians such as Toumani Diabate, Egberto Gismonti, Ballake Sissoko, and Ali Farka Toure to single-handedly sketch a new musical and cultural landscape for the contemporary classical guitar.
In “One Night on Earth: Music from the Strings of Mali”, Derek Gripper has arranged and performed on guitar the compositions of legendary Malian musicians Toumani Diabate, Ali Farka Toure, Ballake Sissoke and Vincent Segal. The extraordinary feat of this recording can only be imagined when one considers that this music was originally composed for and played on the kora, a 21 string African harp-lute made from a skin covered calabash with a hardwood neck.
In an article by Chris Roper in the Mail & Guardian, Derek Gripper describes the kora as “one of the most complex instruments in Africa, an instrument able to perform bass lines and harmonic accompaniment while simultaneously improvising virtuosic melodic lines, creating the impression of a three-piece ensemble on just one instrument.”
Of Derek Gripper’s interpretation of this music, Chris Roper writes: ”Doing sublime justice to this music on six strings is an incredible achievement…. As with the excellent album, it is music that leaves you feeling a little more than human, a little better than human.”
Derek Gripper offers an extraordinary voice in post-apartheid South African cultural landscape, one that demonstrates the country’s new musical confidence by forging fresh paths through cross-genre, cross-generational, and cross-cultural collaborations.