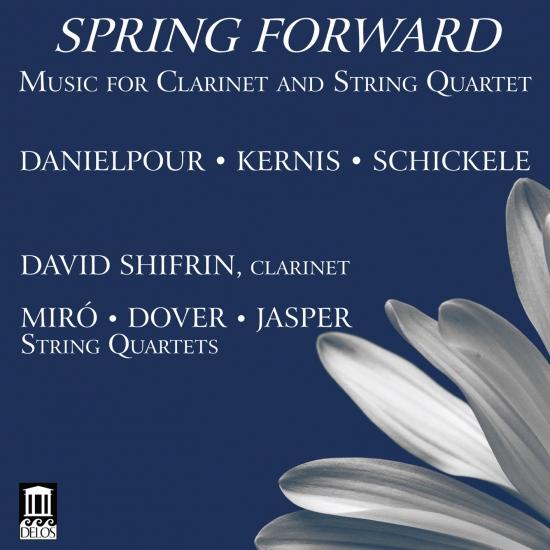 Spring Forward, the delightful title work by Peter Schickele, is a gift to the composer/humorist’s many worldwide fans. This touching Suite represents a culmination of sorts “after a lifetime of entering sketches for such a piece into my notebooks,” Schickele writes in his entertaining program notes.
Richard Danielpour’s moving Clarinet Quintet, (“The Last Jew in Hamadan”) was composed with Danielpour’s memories of his childhood in Iran in mind. (The members of his family who escaped the country were the lucky ones.)
Aaron Jay Kernis’ intriguing Perpetual Chaconne reflects his fascination with the variety of approaches composers have used to develop and vary their ideas over the ages.
C"larinetist David Shifrin, whose work I’ve always liked, here presents three quintets by three different American composers with three different string quartets. The first is a serious work (if one can call any of his music really “serious”) by the multi-talented but wacky Peter Schickele, who has presided over the musical legacy of P.D.Q. Bach for the past 57 years. As in all of his own works I’ve heard, Schickele has a strong sense of form but also an predictable streak laden with humor, and Spring Forward is no exception. Lively rhythms, a touch of jazz and unpredictable twists and turns are all a part of his music, and all are on full display here. He even throws in a few harmonic dissonances for spice, though the second movement has a fairly straightforward harmonic progression and is quite lovely, albeit with a fairly lively middle section. The third movement, in particular, reveals Schickele’s humor in its odd distribution of meter and quirky development. After a brief (2:17), lyrical “Interlude,” we reach the jig-like finale, “A Perfect Picnic,” with its occasional out-of-tonality notes thrown in for flavor.
For the most part, Richard Danielpour’s music is quite tonal and at times easily accessible. This quintet, however, subtitled “The Last Jew in Hamadan,” brings back memories of his childhood in that Iranian city that once had a fairly large Jewish population until the Ayatollah Khomeini took over in 1979 and began executing them, including one of Danielpour’s uncles. Another of his uncles was sent to prison but escaped, and a third fled to Turkey disguised as a mullah. The music is thus imbued with happiness, edginess, tragedy and hope; the first movement has a strong Eastern feel to it and is developed extremely well. The second begins in a more pastoral mood, so much so that it almost sounds like a discrete composition not necessarily tied to the first until the 4:30 mark when it suddenly picks up in a swift, dramatic passage before returning to the pastoral mood of the opening.
The finale of this disc is Aaron Jay Kernis’ Perpetual Chaconne, which begins very slowly with falling figures played by the violins against the clarinet line. The music is tonal and pleasant but not mundane; around 3:30 the tempo picks up and the music develops in an unusual and striking manner, with the string lines becoming more complex and a gradual acceleration to add interest. Indeed, the music becomes ever more complex, particularly in rhythm, and more intense as it goes along, then decelerates to its original slow tempo for further development. In the final section, the faster tempo returns.
A very interesting disc of world premiere recordings, then, with the Schickele piece and the first movement of Danielpour’s quintet being the particular standouts." (Lynn René Bayley)
David Shifrin, clarinet
Miró Quartet 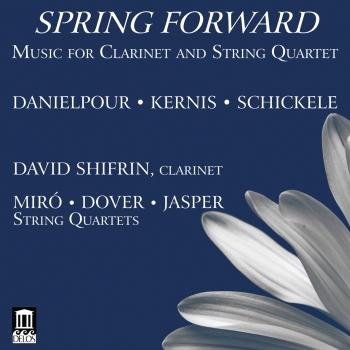 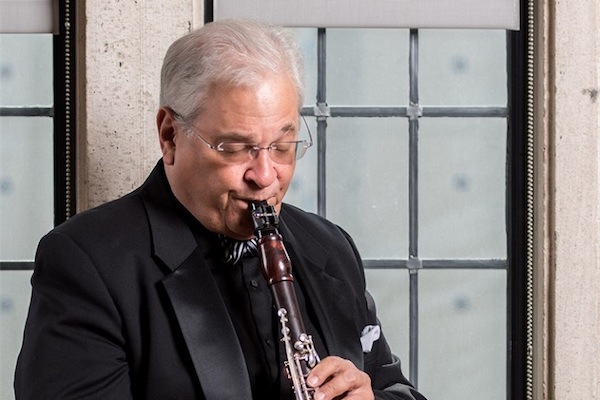