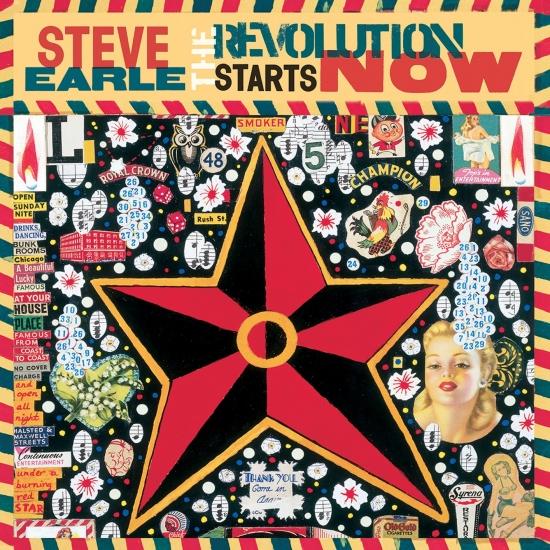 Steve Earle is widely known as a tireless political activist who's not afraid to use his music to further the causes for which he fights. In 2004, America was in dire need of forward-looking activism, and Earle responded with „The Revolution Starts… Now“. The album was written and recorded quickly in order for Earle to get his two cents in before the Presidential election, and it turned out to be both his most overtly political and most effectively concise offering to date.
With a mix of country and straightforward rock & roll, Earle engages in rabble-rousing (the title track), tells the tales of people victimized by the war in Iraq ("Home to Houston," "Rich Man's War"), and lambasts stifling conservative forces on the homefront ("F the CC"). There are a couple of love songs thrown in for good measure, and they're all the more affecting for their marked contrast. „The Revolution Starts… Now“ seamlessly blends the personal and the political without a trace of mawkishness or didacticism.
„Nine years after he returned to active duty in music following a four-year "lost weekend" brought on by drugs and a stay in jail, Steve Earle is not only a stronger and more prolific artist than ever, but he's become nearly as well known for his outspoken political activism as he is for his music. Given this, it's appropriate that The Revolution Starts...Now sounds like a sequel to his previous studio album, 2002's Jerusalem. While Jerusalem explicitly dealt with the fear, paranoia, and political malaise that gripped America after September 11, 2001, The Revolution Starts...Now picks up as America finds itself stuck in an ill-conceived war in Iraq, with a presidential election looming on the horizon. The songs that explicitly deal with the Iraq war are the album's highlights, especially the high-spirited "Home to Houston" (which manages to find a glimmer of humor in its tale of a Texas boy driving a truck on the front lines) and "Rich Man's War" (which speaks of soldiers who find themselves holding the short end of the stick on both sides of the national divide); Earle's storytelling sense meshes well with the chaos and futility of battle, and he shows a genuine compassion for the regular guys who do the work for the power brokers who set up the war. Somewhat less effective is his (apparently) facetious proclamation of lust for Condoleeza Rice ("Condi, Condi," which goes on longer than it needs to and proves reggae isn't Earle's strong suit) and "F the CC," a solid bit of hard rock ranting that somehow seems to lose its point along the way. But the title tune (which bookends the album in two versions) is a loud-and-proud anthem of hope and change that's powerful election year listening, and Earle and his band -- Eric "Roscoe" Ambel on guitar, Will Rigby on drums, and Kelly Looney on bass -- tear into these songs with the enthusiasm and aggression of a hungry man attacking his breakfast. And while Earle likes to joke that he's put a moratorium on songs about girls, "I Thought You Should Know" is a lean and powerful meditation on jealousy and love gone bad that's a welcome change of pace in this context. The Revolution Starts...Now isn't up to the standards of the less theme-specific I Feel Alright or El Corazón, but Earle's polemics are much stronger than the work of your typical "protest" songwriter, and this is a better focused and more passionate work than Jerusalem, though one somehow doubts that the man who needs to hear this the most, George W. Bush, will be putting this on his stereo anytime soon.“ (Mark Deming, AMG)
Steve Earle, guitars, mandola, organ, harmonica, harmonium, vocals
The Dukes:
Eric "Roscoe" Ambel, guitars, vocals
Kelley Looney, bass, vocals
Will Rigby, drums, percussion, vocals
Patrick Earle, percussion
Emmylou Harris, vocals on "Comin’ Around"
Chris Carmichael, viola on "The Gringo’s Tale"
David Angell, violin on "The Gringo’s Tale"
David Henry, cello on "The Gringo’s Tale"
Edward Henry, violin on "The Gringo’s Tale"
Chris Carmichael, conductor
Produced by Steve Earle, Ray Kennedy