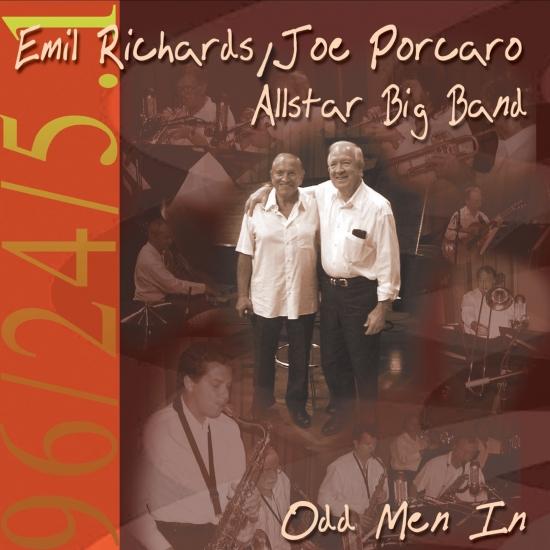 Emil Richards and Joe Porcaro have been making music together for over 60 years! When Emil came to the studio to hear the quartet project, Calamari, he simply had to have his and Joe's big band recorded in the same way. This is it...the very best players in L.A. playing all out in one afternoon.
I never thought AIX Records would record two big bands in a single year…but this opportunity was just too good to pass up. Emil Richards, Joe Porcaro, Mike Valerio and David Garfield, collectively known as Calamari, recorded a quartet record for AIX Records in the spring of 2003. Once Emil came to the studio to experience the playback mixed in high-definition sound he was absolutely blown away. In all of his years of recording, he had never experienced the sense of intimacy, the detail and rich tone that HD-Audio can deliver.
The very next day he called me and told me about his big band and asked if I would be interested in recording them. The incredible players he mentioned made the choice simple…if he could get the guys all together on the stage at Zipper Auditorium then I would show up with the equipment. We had Lanny Morgan, Pete Christlieb, Chuck Findley and of course, the band leaders Emil and Joe. The tracks are amazing examples of what an extremely talented group of players can do when they’re spot on. No headphones, no processing, no studio tricks…just the real deal played during one 4-hour session.
Have you ever wondered who played the bells on “Scarborough Fair?” Or the snaps on the Addams Family TV show, the bongos on the original Mission Impossible TV show, or the xylophone on the Simpsons theme song? Well, Emil Richards, who has close to 2000 films and TV shows to his credit.
His credits span from Frank Sinatra, Joni Mitchell, Frank Zappa, The Beach Boys, Ella Fitzgerald, Bing Crosby, Marvin Gaye, George Harrison to over 750 more. He has played on Movie Scores written by Alfred Newman, Bernard Hermann, John Williams, Jerry Goldsmith, Elmer Bernstein, Bill Conti, and Quincy Jones, Danny Elfman and 100’s more.
Joe Porcaro is originally from Hartford, Connecticut, and now resides in Los Angeles where he is one of the most recorded percussionist/drummers on the music scene. His musical spectrum ranges from Jazz and Rock to Opera and Symphonic.
The sound of this recording brings these incredible instrumentalists into your listening space. The HD-Audio mixes immerse you in the musical interplay with full range frequency response and dynamics.
Emil Richards, vibes
Joe Porcaro, drums
Pete Christlieb, saxophone
Chuck Findley, trumpet
Lanny Morgan, saxophone
Barry Zweig, guitar
David Garfield, piano